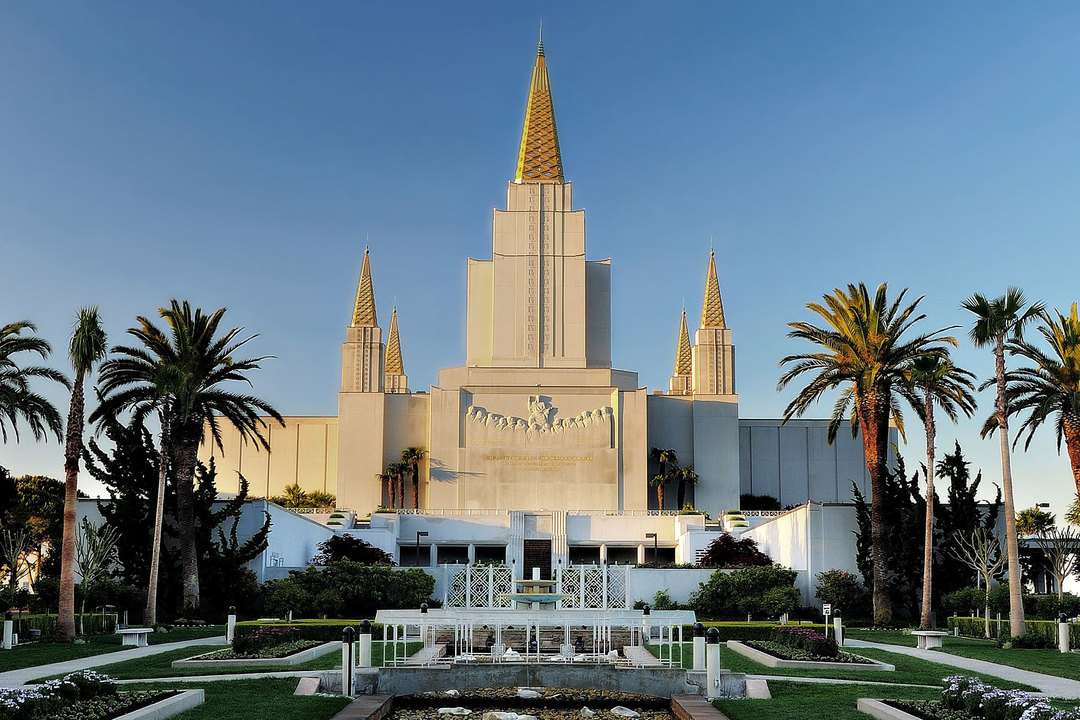 Commanding a sweeping view of the San Francisco Bay Area, the 170-foot Oakland California Temple is a highly recognized East Bay landmark. The magnificent rooftop gardens and extensive grounds are distinguished by a cascading waterfall and creek-style water feature running from fountain to fountain in front of the temple entrance—lined with colorful gardens and towering palm trees. A relief sculpture on the north face of the building depicts Christ teaching His disciples, and a relief sculpture on the south shows the resurrected Lord appearing to the ancient inhabitants of America. On site is a public visitors' center, which includes numerous displays and an inspiring reproduction of Thorvaldsen's Christus statue. Also on the grounds is the East Bay Interstake Center—open to any who wish to attend Sunday services.

The Oakland California Temple was the first temple built with five spires, taking inspiration from sacred sites in Asia to reflect the diversity of Bay Area residents.

The Oakland California Temple was originally named the Oakland Temple.

The Oakland California Temple was originally built with two auditorium-style instruction rooms each seating 200 persons for film presentation of the endowment. In 1990, two smaller instruction rooms were created from the second-floor sealing rooms. In 2019, center aisles were added and seating capacity was reduced to improve the functionality of those spaces.

A visitors' center operated in the west wing of the Oakland California Temple until a larger, detached building was constructed during the 1990 renovation.

The Oakland California Temple was the first temple in the United States designed for film presentation of the endowment and the first temple to have more than one instruction room connected to a central celestial room. To simulate a progressive presentation, slide projectors were used to shine photographic murals on the walls representing the various stages of the endowment. Later, indirect lighting was used to symbolize the transition from one stage to another.

The exterior of the Oakland California Temple features two 35-foot sculpted panels depicting Jesus teaching in the Holy Land (north side) and Jesus appearing to the Nephites (south side), which can be seen up close from the terrace garden that surrounds the temple, occupying the main floor roof. Below the sculpture on the north side is a mesmerizing waterfall that drops into an inner courtyard.

Brigham Young prophesied that "in process of time the shores of the Pacific may be overlooked from the temple of the Lord."1 The Oakland California Temple is a fulfillment of that prophecy.

In April 1928, Elder George Albert Smith had a spontaneous vision of the Oakland California Temple during a meeting with the San Francisco stake president at the Fairmont Hotel atop Nob Hill. President McDonald recalled: "President Smith suddenly grew silent, ceased talking, and for several minutes gazed intently toward the East Bay hills. 'Brother Macdonald, I can almost see in vision a white temple of the Lord high upon those hills,' he exclaimed rapturously, 'an ensign to all the world travelers as they sail through the Golden Gate into this wonderful harbor.' Then he studied the vista for a few moments as if to make sure of the scene before him. 'Yes, sir, a great white temple of the Lord,' he confided with calm assurance, 'will grace those hills, a glorious ensign to the nations, to welcome our Father’s children as they visit this great city."2

A committee to locate the site for the Oakland California Temple was formed in 1934. City representatives were enthusiastic and showed the committee several sites, even offering two free of charge, but an unavailable parcel in the hills always impressed the committee as "the one." The search was suspended after a site was acquired for the Los Angeles California Temple, but the committee remained hopeful. In 1942, wartime government regulations blocked plans that the owner of the hillside property had for a subdivision of luxury homes. He offered the entire 14.5 acres to a member of the original temple site committee for $18,000. Although the owner received higher offers, he remained true to his original offer once President McKay arrived in Oakland two months later to give his approval.3

President Heber J. Grant announced the purchase of the site for the Oakland California Temple in the April 1943 General Conference: "I am happy to tell you that we have purchased in the Oakland area another temple site. The negotiations have been finally concluded and the title has passed. The site is located on the lower foothills of East Oakland on a rounded hill overlooking San Francisco Bay. We shall in due course build there a splendid temple."4

Construction of the Oakland California Temple was officially announced by President David O. McKay at a special meeting held at the Hilton Hotel near the San Francisco airport. Area stake presidents from Fresno on the south, Klamath on the north, and Reno on the east, were invited to the meeting. Overjoyed by the announcement, they pledged to raise $500,000 toward the construction of the temple. They succeeded in raising $635,000.

Over 347,000 visited the Oakland California Temple during its month-long open house. Even on the final Saturday, people stood in line for almost two hours in the rain waiting to get inside.

The dedication of the Oakland California Temple was the first to be transmitted by closed-circuit television to another building. Six dedicatory sessions were held over three days, beginning Tuesday, November 17, 1964. Special tours of the temple were conducted each evening of the dedication for the benefit of those who had traveled long distances.

On December 29, 1988, the Oakland California Temple closed for a major renovation to increase capacity and offer more efficient operation. A visitors' center was constructed on site, replacing the small one that had operated in the west wing of the temple. The vacated space was repurposed as two waiting rooms—one for nonpatrons and the other for wedding parties. The recorder's office was relocated, and a second chapel was added as an assembly room. Two sealing rooms that were located on either side of the Celestial Room were converted to small instruction rooms, giving the temple two large and two small instruction rooms. Replacement sealing rooms were added to the third floor. The temple reopened on October 30, 1990.

In August 2014, work was completed on restoring the waterfall feature at the Oakland California Temple. In 1969, it had been converted to a flower garden and sign holder for a scriptural passage from 3 Nephi 17 due to irreparable leaks.

On February 18, 2018, the Oakland California Temple was closed for a major renovation to bring the historic Bay Area landmark up to code and to update the furnishings and finishes throughout. The designers stayed true to the original vision conceived for the temple by architect Harold W. Burton, upgrading the historic mid-century structure to a mid-century modern masterpiece. The windowless temple had windows added for the first time to the main floor waiting area.