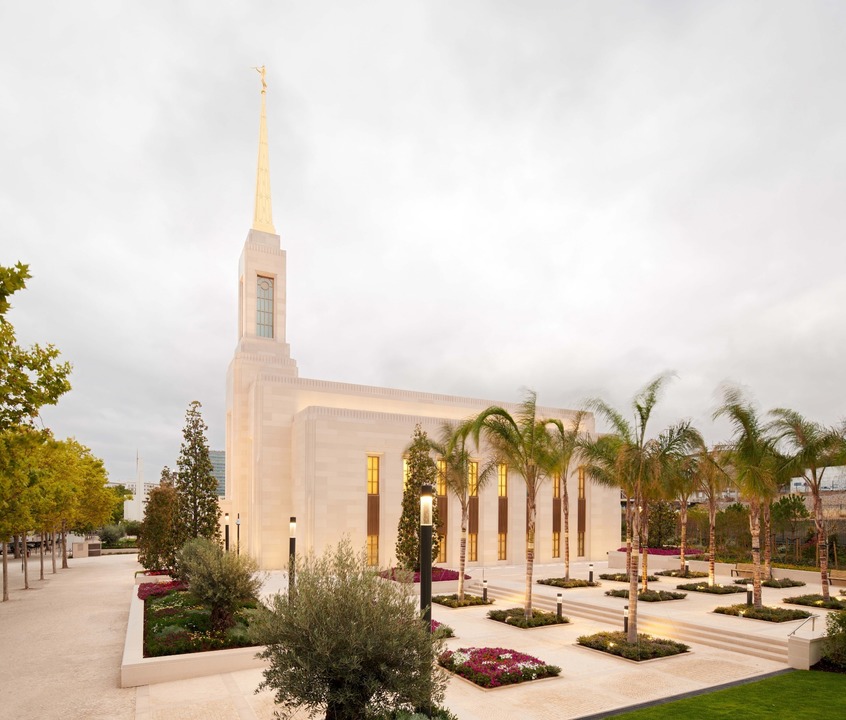 Two instruction rooms, one sealing room, and one baptistry

The Lisbon Portugal Temple sits in the northeastern section of the city adjacent to the Moscavide station of the Lisbon Metro near the parish of Parque das Nações. Once a nondescript industrial area, Parque das Nações was redeveloped for the 1998 Lisbon World Exposition (Expo '98) featuring the theme: The Oceans, a Heritage for the Future. Parque das Nações became a thriving hub of leisure, commercial, and residential activity on the Tagus River, boasting famed venues that include the Lisbon Oceanarium, the Vasco de Gama Tower, the twin São Gabriel and São Rafael towers, the Parque Das Nações Marina, the MEO Arena, the Vasco de Gama Center (shopping mall), and the Vasco de Gama Bridge. The area is beautified by volcano and waterfall fountains that can all be taken in from an overhead gondola lift.

The Lisbon Portugal Temple was the fourteenth temple built on the continent of Europe and the first built in the country of Portugal.

During the renovation of the Idaho Falls Idaho Temple (2015–2017), molds were taken of the distinguished-looking silver and nickel oxen that support the baptismal font. These molds were used to produce bronze-colored oxen for the Lisbon Portugal Temple.

The Church of Jesus Christ of Latter-day Saints was first established in Portugal in the mid-1950s by members of the American armed forces who were stationed at military bases in the country. The first Portuguese citizen to become a member of the Church was baptized in 1967.

Elder Thomas S. Monson of the Quorum of the Twelve Apostles dedicated Portugal for the preaching of the gospel and missionaries were soon assigned to labor. By July 1978, the Church had grown to 1,000 members. The Lisbon Portugal Stake was organized in July 1981.

In his opening remarks of the 180th Semiannual General Conference, President Thomas S. Monson announced the construction of the Lisbon Portugal Temple—the country's first.1 The Saints of Portugal were organized into 6 stakes and 4 districts and attended the Madrid Spain Temple, an approximately 390-mile (625-kilometer) drive from Lisbon.

On January 7, 2013, the Church announced that acquisition of land within the Lisbon city limits had been finalized for construction of the temple. However, a specific location for the site was not given at that time.2

The groundbreaking ceremony for the Lisbon Portugal Temple was held on Saturday, December 5, 2015. Elder Patrick Kearon, president of the Europe Area, presided. He said, "It is a privilege to take part in this joyful moment. The temple will be a bright symbol of our faith, our gratitude to our loving Father in Heaven and His son Jesus Christ. We pray for those who will be involved in building this sacred place, and know that it will be a blessing to the people of Portugal."3

The gold-leafed statue of the angel Moroni was installed atop the gold-plated spire of the Lisbon Portugal Temple on November 19, 2018.

The public open house of the Lisbon Portugal Temple was held August 17–31, 2019. On August 29, Marcelo Rebelo de Sousa, the president of Portugal, was received. Guests were eager to greet the president and to take photographs with him. Elder José A. Teixeira of the Presidency of the Seventy presented President Rebelo de Sousa with a bound book of his family history and a framed copy of his four-generation family line.

On the day before the temple was dedicated Elder Neil L. Andersen of the Quorum of the Twelve apostles presided at three meetings held for the full-time missionaries, the longtime (or pioneer) Church members, and the youth. "We can never look at the Church in quite the same way once the House of the Lord is here," said Elder Andersen, adding, "We’re moving into a new chapter of the Church in Portugal."4

Elder Neil L. Andersen dedicated the Lisbon Portugal Temple on September 15, 2019. In his dedicatory prayer, he said: "We thank Thee, Father, for this choice land of Portugal, for the goodness of thy sons and daughters who live in this beautiful country, and for the freedom that is here, to worship Thee and to construct this holy house in Thy name and the name of Thy Son. We honor those Latter-day Saints, on this side of the veil and those now with Thee, who have embraced and remained faithful to the restored gospel in the forty-five years since President Thomas S. Monson first dedicated this land."

The colors throughout the Lisbon Portugal Temple are gold, blue, ochre and lavender. Designs are based on derivatives of azulejo tile star patterns, which are indigenous to Portugal and reflect the region’s Moorish heritage.

The temple’s exterior is covered with Portuguese Moleanos limestone, quarried from a location near Lisbon and fabricated by the Portuguese company Solancis. The temple reflects the architecture of the late Art Deco and Modern periods.

The stone tile, in creams and warm and light browns, is from Spain, Italy and Turkey. Ceilings throughout the temple feature cove or pendant lighting. Crystal chandeliers in the celestial and sealing rooms are by Swarovski Lighting of New York, and fixtures were provided by Crenshaw Lighting in the United States.

Interior and exterior art glass have deeply etched and carved patterns with added gold leaf to highlight the designs. They too are based on tile patterns native to Portugal.

The building is 49 feet tall and includes a 134-foot gold-leafed spire with the angel Moroni statue at the top.5

"It is in temples—whether they be the portable tabernacle of testimony used by Moses, or the magnificent wonder of the world built by Solomon, or the temples of the latter days—that the saints receive the mysteries of godliness."
—Bruce R. McConkie