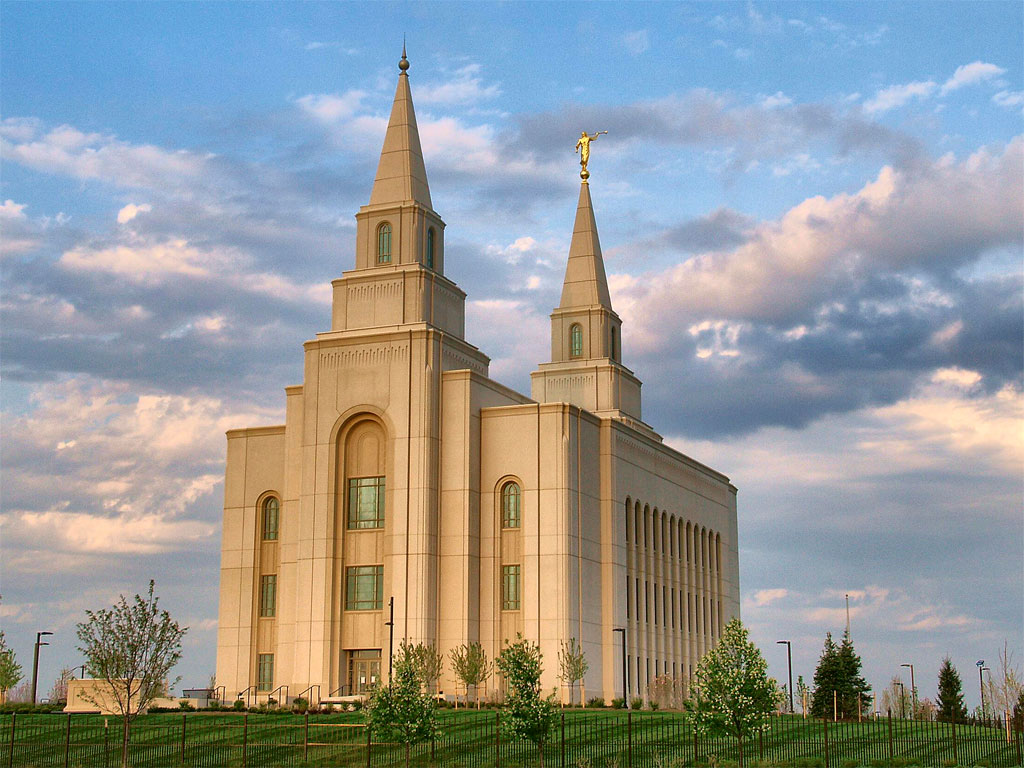 The distinctive double towers of the Kansas City Missouri Temple rise majestically over I-435 in Kansas City's Northland, just west of the Liberty Jail Historic Site in Liberty, Missouri. A meetinghouse, constructed at the same time as the temple, stands to the south. Numerous trees and brightly colored flowers fill the inviting grounds, which are open to the public.

The Kansas City Missouri Temple was the second temple built in Missouri, following the St. Louis Missouri Temple (1997), though temple sites were dedicated in the 1830s for temples that were not constructed in Independence, Far West, and Adam-ondi-Ahman.

The location of the Kansas City Missouri Temple site was announced at the Liberty Missouri Stake Conference on Sunday, October 12, 2008.

On March 24, 2011, large crowds gathered to the Kansas City Missouri Temple to witness the raising of the gold-leafed angel Moroni statue atop the eastern tower. The two towers and the finial of the western tower had been installed the three days prior.

Beautiful white oak harvested from Adam-ondi-Ahman was used throughout the interior of the Kansas City Missouri Temple.

Nearly 91,000 people toured the Kansas City Missouri Temple during its public open house. Because of the high number of reservations made for tour times, the open house was extended an additional week.

The first attempt to build a temple in the Kansas City area was made by the early Saints in the 1830s when a temple site was dedicated in Independence, Missouri, in 1831. The site for a second temple was dedicated farther north in Far West, Missouri, in 1838. Those temples were never constructed, however, as the Latter-day Saints were driven out of Missouri pursuant to an extermination order issued by Governor Lilburn W. Boggs in 1838. Latter-day Saints had also settled in Kansas, but they left when Church headquarters were relocated to Nauvoo, Illinois, and then to Salt Lake City, Utah. As Church membership returned and grew in the Midwest beginning at the turn of the century, Kansas City's first stake was established in 1956. By 2008, Church membership in Kansas and Missouri had grown to 100,000 members in 21 stakes.1

President Thomas S. Monson made the announcement that a temple would be constructed in the greater Kansas City area during the opening session of General Conference in October 2008. Six months later, a site plan had been submitted to the city government that featured the temple, an adjoining meetinghouse, and 140 single family residential units on a 56-acre tract of land. Plans proceeded through the city approval process, which required an amendment to the Shoal Creek Valley Area Plan, a rezoning ordinance, and a Community Unit Project plan.2 The first phase of the project included the church lot and 22 single-family residential lots, officially recorded as The Meadows at Searcy Creek First Plat.3

On Saturday, May 8, 2010, ground was formally broken for the temple. Elder Ronald A. Rasband of the Presidency of the Seventy presided, and Elder William R. Walker, Executive Director of the Temple Department, was also in attendance. Elder and Sister Rasband and Elder and Sister Walker were among the speakers who emphasized the history and sacrifice of the Saints in Missouri, noting that a large part of the restoration of the gospel took place under the direction of the Prophet Joseph Smith in the area of the temple. The spiritual presence of those early pioneers and leaders could be felt by some in attendance.

Elder Donald D. Deshler, Area Seventy, urged those present to prepare their hearts, to be more like the Savior, and to purify their thoughts and actions to be worthy of the temple when it is completed. Six-year-old Kaitlynne Willden began preparing her heart even before the groundbreaking ceremony when she found a heart-shaped rock in the yard of her Uncle Matt and Aunt Jeanne, members of the Springfield Missouri South Stake. She lovingly gifted the rock to her Aunt Jeanne, who carried it to the groundbreaking ceremony just a few weeks later. While other members were turning the soil with gold-colored shovels, Jeanne and Matt added their own piece of soil—Kaitlynne's heart-shaped rock—to the site where the temple would stand, joining families together in love for time and all eternity.4

The evening before the temple was dedicated, over 3,000 youth gathered to stage a cultural celebration in the Municipal Auditorium entitled "Of One Heart in the Heartland." Prior to the performance, President Monson addressed the audience stating, "The stately and magnificent Kansas City Temple, in this lovely part of the country—really, the heartland of America—will be dedicated in the morning. It is, of course, the reason for this great celebration." Highlights of the history of the Kansas City temple district were presented through narration, song, and dance in nine segments: Shining Hearts, Willing Hearts, Inspired Hearts, Courageous Hearts, Changing Hearts, Broken Hearts, Confident Hearts, Sharing Hearts, and Of One Heart. At the conclusion of the program, youth performed through their tears two original compositions entitled "We Believe" by Jenny Phillips and "Of One Heart in the Heartland" by Wendy V. Dyck.5

The Kansas City Missouri Temple was dedicated in three sessions by President Thomas S. Monson on May 6, 2012. Accompanying him was Elder Jeffrey R. Holland of The Quorum of the Twelve, Elder Donald L. Hallstrom of the Presidency of the Seventy, Elder William R. Walker of the Seventy and Executive Director of the Temple Department, and their wives. In his remarks, President Monson noted that Clay County was "an area where the Prophet Joseph Smith walked and where significant events took place in the early days following the restoration of the gospel." A powerful spirit filled the hearts of all those who attended the dedication. "Those early Saints who suffered and sacrificed in this area are rejoicing with us now," said the prophet.6