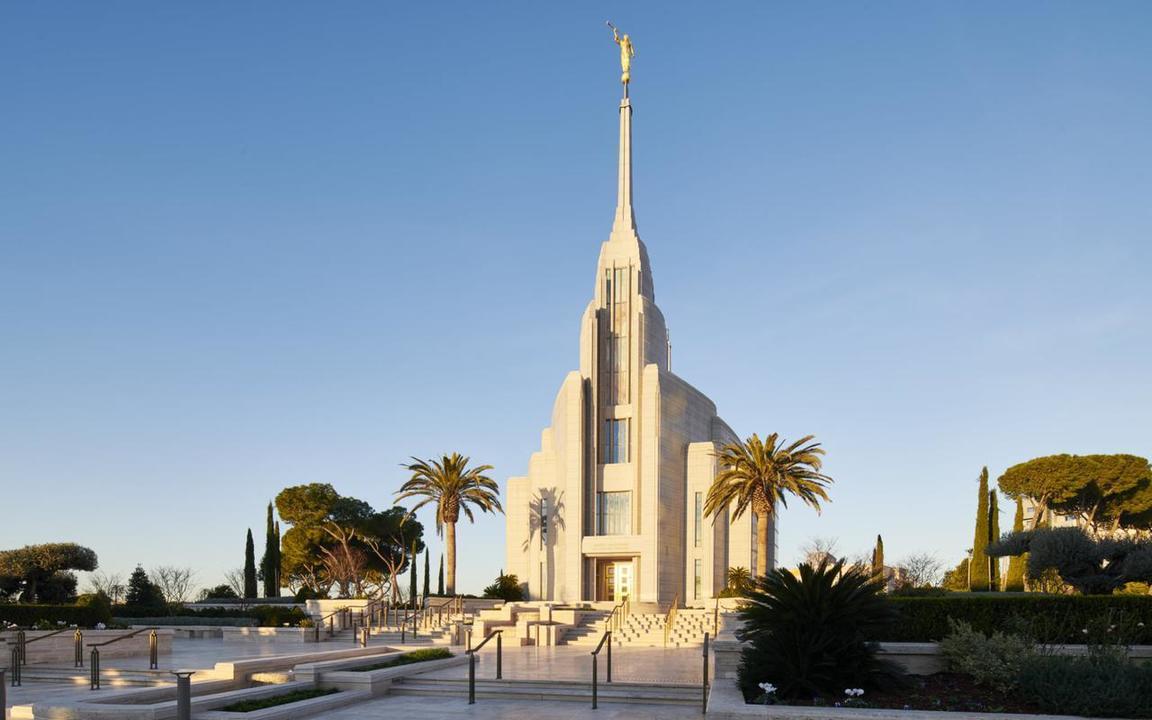 In July 2017, the on-site construction office trailers were donated to community organizations, and office space was relocated to the patron housing facility.

On March 25, 2017, the construction of the Rome Italy Temple reached an important milestone with the installation of the angel Moroni atop the eastern spire. The event marked the now-steady progression of construction toward completion under the new general contractor. For much of 2014 and 2015, construction advancements were limited, and work was focused largely on replacing subpar materials and redoing work to bring the temple to the standard contracted by the Church. Long delays experienced in 2014 prompted an official statement from the Church in January 2015: "In recent months, progress on the Rome Italy Temple slowed due to contractor difficulties not related to this project. Those challenges have been addressed, and work will soon resume at a normal pace. No dates have been announced for completion. We are grateful that our members have extended their faith and prayers and sought heaven's help in seeing this important project through to completion." In the months that followed, foreign contractors were flown in to oversee the building's completion. Obtaining visas for those individuals and meeting Italy's other entry requirements proved a lengthy process. Work on the other buildings at the temple site is nearing completion.

On September 18, 2014, the Deputy Mayor of Rome, Luigi Nieri, toured the construction site of the Rome Italy Temple. He praised the Church for the work being accomplished and promised to return for the open house, which has not yet been announced.

On September 7, 2014, members of the Rome Italy East Stake dedicated their fast to the construction progress of the Rome Italy Temple and to the workers' ability to build to the exacting standards required by the Church. Little has changed on the exterior since January, but work continues slowly on the interior. A large amount of work has been accomplished on the temple grounds including walkways made of travertine pavers quarried in Italy. Construction continues simultaneously on a stake center, visitors' center, and patron arrival and housing center. A beautiful stand of Italian stone pines leading to the temple decorate the construction site. A grove of olive trees that once stood on site were transplanted into crates for preservation and then reintegrated into the landscaping.

The resplendent interior of the Rome Italy Temple features beautiful Italian-quarried Perlato Svevo marble on surfaces throughout the building including floors, walls, and countertops. Other stones quarried in Italy, Spain, Turkey, and Brazil, are inlaid as accents. Magnificent floor work is featured in the baptistry and grand foyer, which reflects Michelangelo's design at the Piazza del Campidoglio on top of Rome's Capitoline Hill. The pattern is also seen in the sculpted off-white carpets in the Celestial and sealing rooms. The majesty of the temple is further reflected in the choice of artwork, stained glass, crown moldings, and other furnishings and finishes.1

The Rome Italy Temple will be the centerpiece of a complex of religious and cultural buildings significant to the Church.

The Rome Italy Temple is being built on an elevated 15-acre site in northeast Rome near the Grande Raccordo Anulare, the circular road (beltway) that surrounds the city. The picturesque country site, once adorned by a charming villetta, sits on the outskirts of the city at a freeway interchange. The parcel is punctuated with Roman pines and an exquisite stand of olive trees.3

Although just a small section of the site was originally permitted for construction of the temple, recent zoning modifications allowed for the entire parcel of land to be used.4

Building sites in Rome must be examined for Roman ruins before construction is permitted. The inspection is carried out by digging trenches every 10 to 15 feet across the property. The day the temple property was to be inspected, Church members in Rome held a special fast. No ruins were found over the entire property, yet an old Roman village was discovered just 100 yards beyond the property boundary line. The Church purchased the property in the late 1990s.5

Italian members met the announcement of the Rome Italy Temple with the animated cheering and enthusiasm you might expect to see in a sports arena during a last-second win, explained President Massimo De Feo, president of the Rome Italy Stake, in an interview. He added that since the temple announcement, the stake is seeing the baptism of full families for the first time. In just the previous five years, the number of stakes in Italy grew from three to six. And temple attendance at the distant Bern Switzerland Temple has been much higher from the Saints in Italy than from any other country in the temple district.6

In the Conference Center, President Thomas S. Monson's announcement of a temple to be constructed in Rome produced wide smiles and an audible gasp of surprise from the congregation during the Saturday Morning Session of the October 2008 General Conference.

The Rome Italy Temple was the thirteenth temple built in Europe and the first built in Italy.

A charming Italian villetta, which stood at the highest point of the Rome Italy Temple site, was razed to make way for the buildings in the temple complex. The villetta served for a time as an apartment for the full-time missionaries.

The dedication of the Rome Italy Temple marked the first time in history when the entire First Presidency and Quorum of the Twelve Apostles gathered to one location outside the United States. All fifteen brethren posed for a photograph in the visitors' center taken in front of the reproductions of Bertel Thorvaldsen's statues of the Christus and twelve apostles.

The growth of the Church in Italy has not been without its opposition. Just three years after the Saints arrived in the Salt Lake Valley, the first missionaries arrived in Genoa, Italy, on June 25, 1850, including Elder Lorenzo Snow, who would become the fifth president of the Church. Over the next three years, 221 people were baptized and organized into three branches. But most proselytizing in Italy stopped in the early 1860s in the face of local opposition and because of a request from Church leaders for Italian members to immigrate to Utah. An attempt to reopen missionary work in Italy in 1900 was refused by the government.

The Church was finally reestablished in Italy in 1951, following the conversion of Vincenzo di Francesca, who happened to find a burned copy of the Book of Mormon with a missing cover and title page. Italians who had joined the Church in other countries began to return to Italy during this period. They attended Church with LDS serviceman stationed in Italy in various branches. By the end of 1964, Church records showed 229 members in Italy. That same year, Elder Ezra Taft Benson, an apostle who would become the 13th president of the Church, petitioned the government for permission to resume missionary work. Permission was granted, and missionaries began to proselyte on January 27, 1965. By 1978, membership has grown to over 7,000 and increased to 14,000 by 1990. Today there are over 22,600 members organized into 10 stakes and 1 district.7

Although missionary work had been allowed in Italy since 1964, the Church began in 2000 the lengthy process of seeking a concordat with the government that would grant it state-sponsored status. This status was granted to the Roman Catholic Church in a concordat signed by Mussolini—a relationship that was perpetuated into Italy's post-fascist constitution. Since 1984, however, the Catholic Church has had to share this level of government recognition with other religions operating in Italy. Approved churches become concordates, which receive tax funds and other rights from the government similar to those received by the Catholic Church.8

At a London fireside, Elder Kenneth Johnson of the First Quorum of the Seventy related events that have contributed to the Italian government's official recognition of the Church. In October 2006, he accompanied other high-ranking Church leaders, including Elder Dieter F. Uchtdorf, to a meeting in Rome to make a case for the Church to the government. President Uchtdorf noted the Church's longtime presence and reputation in Italy, but the presiding government official seemed unmoved. Instead, he related that he had traveled—without announcement—to Salt Lake City in preparation for the meeting. Two Italian sister missionaries had served as his guides on Temple Square. He noted the deep impression left on him by these two Italian citizens, and then inquired when the Church might build a temple in Rome. Once these papers are signed, Elder Uchtdorf replied. The officer signed. On April 4, 2007, Prime Minister Prodi gave his signature, and then it proceeded to Parliament.9

With legal recognition still stalled in Parliament in late 2009, the Church took the step of hiring a Washington, D.C., lobbyist to help push through the approval. A. Elizabeth Jones, a former high-level State Department employee and ambassador to Kazakhstan, who is now an executive vice president at APCO Worldwide, is lobbying the U.S. embassy in Italy to support the Church's application. The intesa—an Italian term referring to an "understanding" with the government—would carry certain privileges including facilitating the authorization of bishops to perform civilly recognized marriages and making the renewal of visas for missionaries easier.10

On May 13, 2010, the Italian Cabinet, or Council of Ministers, approved an intesa with The Church of Jesus Christ of Latter-day Saints, which would grant the Church Italy's highest status given to religions. The action would elevate the legal recognition of the Church from charitable foundation to official religion.11

The action of the Council of Ministers culminated on July 30, 2012, when the president of Italy, Giorgio Napolitano, signed the intesa into law, making the Church a "partner of the state." Maurizio Ventura, president of the Pisa congregation, said, "The intesa is a fulfillment of a long-awaited blessing." The new legal status—the highest status granted to religions in Italy—gives the Church greater freedom to do more good. John Zackrison, director of the International Coordinating Committee of the Church, explained the benefits: "It will eliminate current barriers that frequently interfere with our Church leaders performing marriages and otherwise ministering, it will smooth the process for obtaining visas for missionaries and mission presidents, and it will grant unquestioned freedom for the Church to perform any functions or activities deemed essential to its worldwide mission," as well as grant Church clergy the ability to visit members and those in need with automatic access to state hospitals, prisons and military barracks. Perhaps most rewarding for Italian members is the recognition of the Church as a legitimate Christian faith. Ventura explained that the long process was a "time of work, a time of prayers, a time of preparation and finally a time of full recognition."12

"It is in temples—whether they be the portable tabernacle of testimony used by Moses, or the magnificent wonder of the world built by Solomon, or the temples of the latter days—that the saints receive the mysteries of godliness."
—Bruce R. McConkie