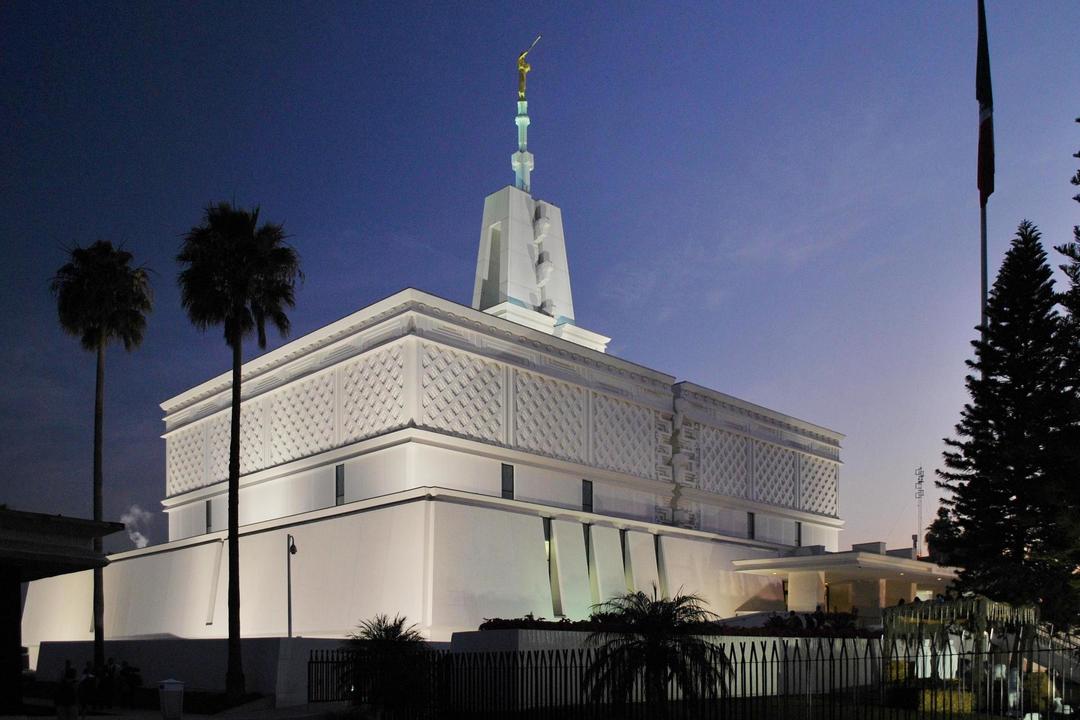 Characterized by its highly ornamented Mayan-inspired exterior, the Mexico City Mexico Temple is an acclaimed landmark in northeastern Mexico City, located near Bosque de Aragón—one of the city's principal parks. The temple grounds are park-like themselves, featuring beautiful gardens and an enchanting water feature. Several other Church buildings share the "Manzana del Templo" (Temple Square) including a missionary training center, stake center, patron housing facility, and an informative visitors' center—free to the public. The visitors' center's centerpiece is a supernal reproduction of Thorvaldsen's Christus statue. During Christmas, the grounds are decorated with hundreds of thousands of lights in a festive display of the season.

The Mexico City Mexico Temple was the first temple built in Mexico.

The Mexico City Mexico Temple was the second temple built in a Spanish-speaking country, following the Santiago Chile Temple (1983).

The Mexico City Mexico Temple is the largest temple outside of the United States.

The Mexico City Mexico Temple is one of only five temples featuring an angel Moroni statue holding the gold plates. (The other four temples are the Los Angeles California Temple, the Washington D.C. Temple, the Jordan River Utah Temple, and the Seattle Washington Temple.)

Following its completion, the Mexico City Mexico Temple received an international award for artistic use of precast concrete.

The Mexico City Mexico Temple has received favorable attention from the school of architecture at the University of Mexico, becoming the subject of much study.

By its 25th anniversary, the Mexico City Mexico Temple had dropped at least eight feet in elevation due to the rapid subsidence of Mexico's capital city.

Ever since endowments were first given in Spanish in 1945 in the Mesa Arizona Temple, faithful Mexican Saints looked forward with anticipation to the time when they might be blessed with a temple in their own country.

When Church architect Emil B. Fetzer received the assignment to design the Mexico City Mexico Temple, he turned to a book on Mayan architecture, which Heber Grant Taylor and his wife felt inspired to give him 18 years earlier from the library of his grandfather President Heber J. Grant.

During its 10-day open house, more than 110,000 visitors toured the Mexico City Mexico Temple including thousands of government, business, and civic leaders. Mission presidents estimated 2,900 requested visits as a direct result of the open house.

At the dedication of the Mexico City Mexico Temple, Elder Ezra Taft Benson received the distinct impression that God was not pleased with Church members' neglect of the Book of Mormon. Stressing the importance of the Book of Mormon would later become one of the hallmarks of his presidency.

In March 2007, the Mexico City Mexico Temple was closed for a year-and-a-half renovation and remodeling project, which included seismic enhancements, replacement of the precast concrete exterior panels, refurbishment of the angel Moroni statue, revamping of the landscaping, and remodeling of the baptistry, main lobby, corridors, sealing rooms, and ordinance rooms.

The evening before the dedication, some 87,000 poured into Aztec Stadium—venue of the 1968 Summer Olympics and two World Cup finals—to hear the Lord's prophet and to enjoy a cultural event featuring 8,000 youth. President Monson connected with the Saints in his opening remarks, speaking of his childhood experiences with Salt Lake City's Mexican community and fondness for enchiladas. He even surprised the crowd with an impromptu verse of "El Rancho Grande." Following his remarks, the audience was delighted for 80 minutes with regional folk dances, reenactments of Mexican history, and a finale procession of full-time missionaries set to a medley of hymns. The evening closed with an exchange of handkerchief waves between the Lord's servants and the tens of thousands of attendees.1

On dedication day, thousands of Mexican members participated in the two rededicatory sessions, which were held in the temple and also broadcast to meetinghouses in Mexico and Spanish-speaking congregations in the United States. Following the dedicatory prayer, President Monson expressed his love for the Mexican people and his assurance of the continued growth of the Church and of temple building in Mexico. "There will be more," he said.2

In January 2014, the Mexico City Mexico Temple closed for an 18-month renovation of the interior. Over 96,000 people toured the temple during its public open. The evening prior to the rededication, the youth of the temple district presented a cultural celebration entitled A Legacy of Faith and Sacrifice. President Henry B. Eyring, first counselor in the First Presidency, rededicated the temple.