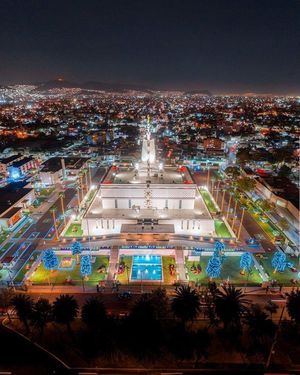 An aerial photograph of the Mexico City Mexico Temple captures the spectacular Christmas light display on the grounds of the temple complex, which celebrate the birth and life of the Lord, Jesus Christ. Visitors are welcomed to walk the grounds and view exhibits at the visitors' center including a replica of Thorvaldsen's Christus statue.

The magnificent Mexico City Mexico Temple was rededicated today in two sessions by President Henry B. Eyring, first counselor in the First Presidency, following an extensive renovation of the interior. The sessions were broadcast to meetinghouses throughout the temple district.

Open house tents are coming down at the Mexico City Mexico Temple as the final preparations are made for the rededication on Sunday, September 13. The evening before the dedication, a youth cultural celebration will be held. Mexico's 13th temple will soon be dedicated in Tijuana.

Beginning this Friday, August 14, and continuing through Saturday, September 5, the beautifully renovated Mexico City Mexico Temple will be open to the public for free guided tours. Take a virtual tour of the interior of the temple.

The public is invited to a free open house for the Mexico City Mexico Temple beginning Friday, August 14, and continuing through Saturday, September 5, 2015 (except Sundays). The temple will be rededicated on Sunday, September 13, in three rededicatory sessions.

Beginning January 6, 2014, the México City México Temple will close for approximately 18 months for an extensive renovation project. The temple will be rededicated following construction work. The temple was rededicated by President Thomas S. Monson in November 2008.

Christ's Birth Celebrated at Temples Across the Globe

During the Christmas season, nativity scenes and thousands of twinkling Christmas lights are a common sight on the grounds of temples of The Church of Jesus Christ of Latter-day Saints, as seen in this photograph of the México City Temple.

The Mexico Area Presidency has sent a letter to Mexican Church leaders directing that Sunday worship services and temple excursions be suspended, following recommendations issued by the Federal Government. Mexico-bound missionaries in the MTC will remain in the MTC.