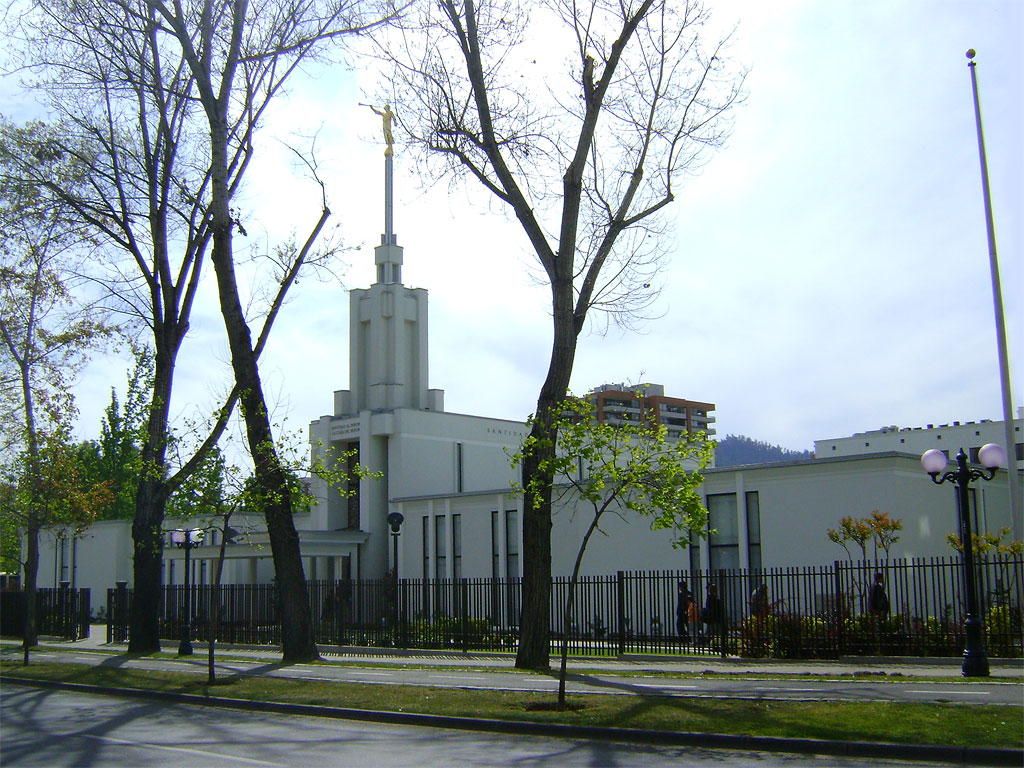 Stucco on brick and reinforced concrete

Situated in Santiago's Providencia district, the site of the Santiago Chile Temple is known locally as "Temple Square." Sharing the block are a meetinghouse, area offices, distribution center, mission headquarters, and patron housing. Beautiful mature trees line the front of the temple while enchanting gardens fill the grounds behind the temple—accented by a focal point water fountain. Unique features of the temple include hand-carved wainscoting in the waiting area, motifs of the copíhue—Chile's national flower—on door handles and art-glass windows, and a floor motif of inlaid Chilean marble and lapislázuli (native stone) in the baptistry and entryway.

The Santiago Chile Temple was the second temple built in South America, following the São Paulo Brazil Temple (1978), and the first built in Chile.

The Santiago Chile Temple was the first temple built in a Spanish-speaking country.

The site for the Santiago Chile Temple was purchased by the Church many years before the temple was constructed with the intention of building a Church school.

The open house of the Santiago Chile Temple drew extensive media coverage and visits from numerous government officials and business leaders—several of whom requested Church literature or missionary visits.

President Gordon B. Hinckley, second counselor in the First Presidency, dedicated the Santiago Chile Temple on September 15, 1983, under the direction of President Spencer W. Kimball.

At the time of its dedication, the Santiago Chile Temple served 140,000 Chilean members, which had joined the Church over the previous 27 years since the Church's establishment in Chile in 1956.

Over three times the expected number of visitors attended the first day of the open house preceding the rededication of the Santiago Chile Temple. A total 62,065 people toured the exquisitely refurbished building.

A cultural celebration was held the evening before the rededication of the Santiago Chile Temple featuring the talents of 4,000 youth.1

"Behold, I will send my messenger, and he shall prepare the way before me: and the Lord, whom ye seek, shall suddenly come to his temple, even the messenger of the covenant, whom ye delight in: behold, he shall come, saith the Lord of hosts."
—Malachi 3:1