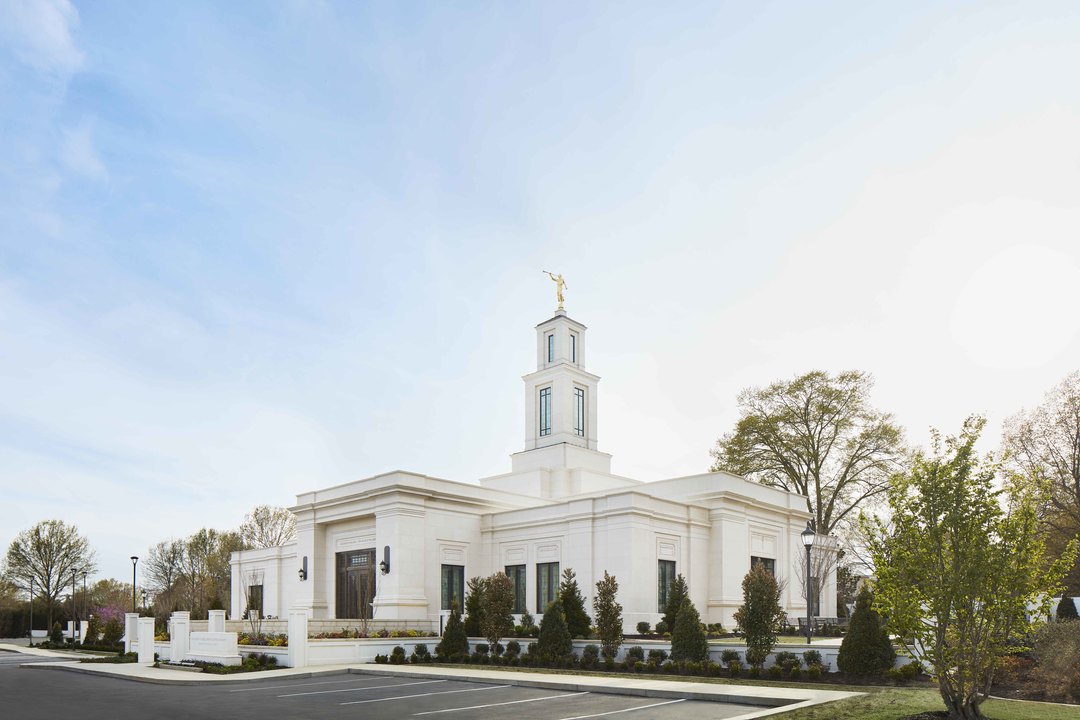 The Memphis Tennessee Temple was the first temple built in the state of Tennessee, though plans for a temple in Nashville had been announced several years earlier and were met with delays.

The Memphis Tennesse Temple was dedicated on the same day as the Reno Nevada Temple.

In 2003, the city of Bartlett, Tennessee, awarded the Memphis Tennessee Temple the "America in Bloom" award. The award came as a surprise to Church representatives as they had not entered the temple in the contest. However, contest committee members can enter buildings they felt should have been, and such was the case with the temple.

On September 29, 2017, the Memphis Tennessee Temple closed for a major renovation that altered the appearance of the interior, exterior, and grounds of the temple. The floor plan was slightly modified for more efficient use of the building, and ventilation issues were addressed. The renovation was followed by a rededication ceremony presided by Elder Jeffrey R. Holland of the Quorum of the Twelves Apostles on May 5, 2019.

The Memphis Tennessee Temple renovation improved the entry and tower of the temple. The steeple was raised 10 feet from its existing height to better correspond with the revised entry. The building’s exterior is clad in a beige limestone.

Gold leaf pinstriping is seen in the instruction, celestial and sealing rooms. Art glass throughout the temple incorporates the infinity bell flower and lazy eight motif and is created in blues, greens and corals.

Antiqued bronze pendant lighting is featured throughout much of the temple. The neoclassic crystal and brass chandelier highlights the celestial and sealing rooms.

Daphne white stone tile from Sorrento, Florida, is utilized throughout the entry, baptistry and brides’ room.

Rugs feature a pawpaw flower field pattern with a lazy eight border in greens, blues and creams in the entry, waiting room and brides’ room.

"This is the beginning of a new temple and a time for reflection," said Elder Gordon T. Watts, first counselor in the North America Southeast Area presidency, who presided at the Memphis Tennessee Temple groundbreaking ceremony. "If necessary, it should also be a beginning of our personal preparation to be worthy in every way to enter and perform labors for the living and the dead." Elder Watts noted the great responsibilities and blessings associated with a temple by listing six specific blessings: First, the temple stands as a "landmark of strength, hope and holiness" to all who are associated with it. Second, it enhances the importance and sacredness of values that promote love, honor, respect and the sanctity of marriage. Third, it is "a reminder of the important work of salvation that will take place within its walls." Fourth, the sacred edifice reminds members—who must be worthy to enter it—"that we must be constantly aware of our personal actions and thoughts." Fifth, "the temple [stands] as a firm foundation that will encourage and entice the rising generation of young people to pattern their lives after that of the Savior." And sixth, the "presence of the temple in the community [sparks] the Spirit of Christ in hundreds of people."

He also noted, "Hundreds, thousands, even millions will be the benefactors of the work that will be done within these sacred walls of this soon-to-be completed temple. I can imagine that many of your ancestors who may have been waiting for years, are shouting for joy at the possibility that they may now receive the sacred, saving ordinances that you can give them."

Elder Griffin reminded members of President Gordon B. Hinckley's concern. "Knowing of the essential saving ordinances that are to be had only in the temples, he wanted to make them available to all Church members no matter where they lived," he said. Speaking of the temple in an interview, Bertha Spencer, widow of L. B. Spencer, the first president of the Tennessee West District, created in 1947, said: "I have prayed ever since I was a girl to have a temple in Memphis."

Darrell Danielson, president of the Memphis Tennessee Stake, noted: "We are excited to have a temple in our area. Early members traveled to Salt Lake City for their first temple experience. Later the trip was cut in half when the Washington D.C. Temple was built. Then came Atlanta followed by St. Louis. Travel time was reduced from days to hours. Now some members will have less than an hour to go to participate in temple work."1