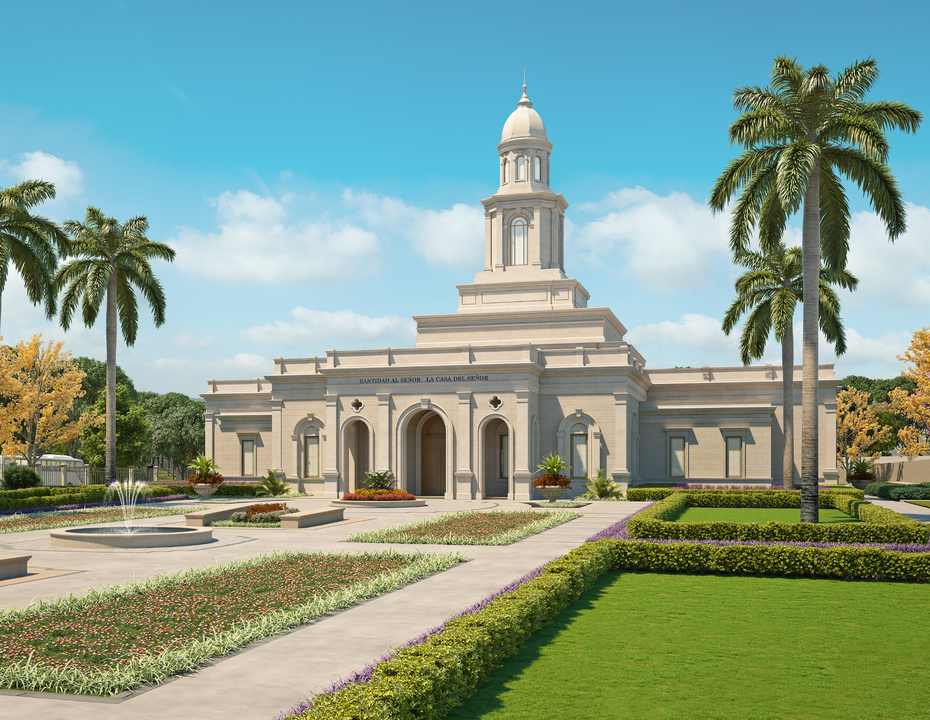 Elder Taylor G. Godoy, first counselor in the Central America Area presidency, presided at the groundbreaking ceremony for the Managua Nicaragua Temple on Saturday, November 26, 2022. The program featured a youth speaker, a pioneering member speaker, a youth choir, and remarks by Elder Godoy. In his site dedicatory prayer, Elder Godoy said: "Bless the members of the Church in this wonderful country, so that at the same time that the temple is built, they can build and strengthen their testimonies of the Savior Jesus Christ with the resolution to be His disciples forever."1

On October 17, 2022, the official exterior rendering of the Managua Nicaragua Temple was released to the public.

On October 17, 2022, the location of the Managua Nicaragua Temple was announced as an 8.9-acre site at the south end of Managua on the highway to Masaya. Plans call for single-level temple of approximately 25,000 square feet.2

President Russell M. Nelson, who had made a promise to Nicaraguan Saints six years earlier that they would have a temple when they were ready, announced the Managua Nicaragua Temple himself in the closing session of the April 2018 General Conference. Aside from the sparsely populated country of Belize, Nicaragua was the only nation in Central America without a temple. Nicaragua is home to nearly 100,000 Latter-day Saints organized into 12 stakes and 4 districts. To participate in temple service, Church members currently cross international borders to the Tegucigalpa Honduras Temple or the San José Costa Rica Temple.3

"I promise you that when you are ready, the Lord will do His part so that you have a temple," said Elder Russell M. Nelson of the Quorum of the Twelve to Nicaraguan members gathered for a member meeting on January 18, 2012. The prophetic promise was pronounced after he encouraged members in their holiness and in their family history work. He further urged members to develop Christlike love for one another, to pray, to acquire knowledge through scripture study, and to cultivate perseverance.

The apostle's visit was not his first to Nicaragua. "Being here today brings back sweet memories," said Elder Nelson, who first visited the country in 1990 with Elder Richard G. Scott, following the dedication of El Salvador for the preaching of the gospel, and again in 1996 with President Gordon B. Hinckley, following the organization of the Atiquizaya El Salvador Stake. "I know that the Church will continue to grow and bless this nation. You will be the means by which the Lord will pour out His blessings." In his closing remarks, Elder Nelson testified of the Atonement of Jesus Christ and gave thanks for the faith, devotion, and tithes and offerings offered by the members in Nicaragua.

The Managua Nicaragua Temple will be the first temple built in Nicaragua and the seventh in Central America.