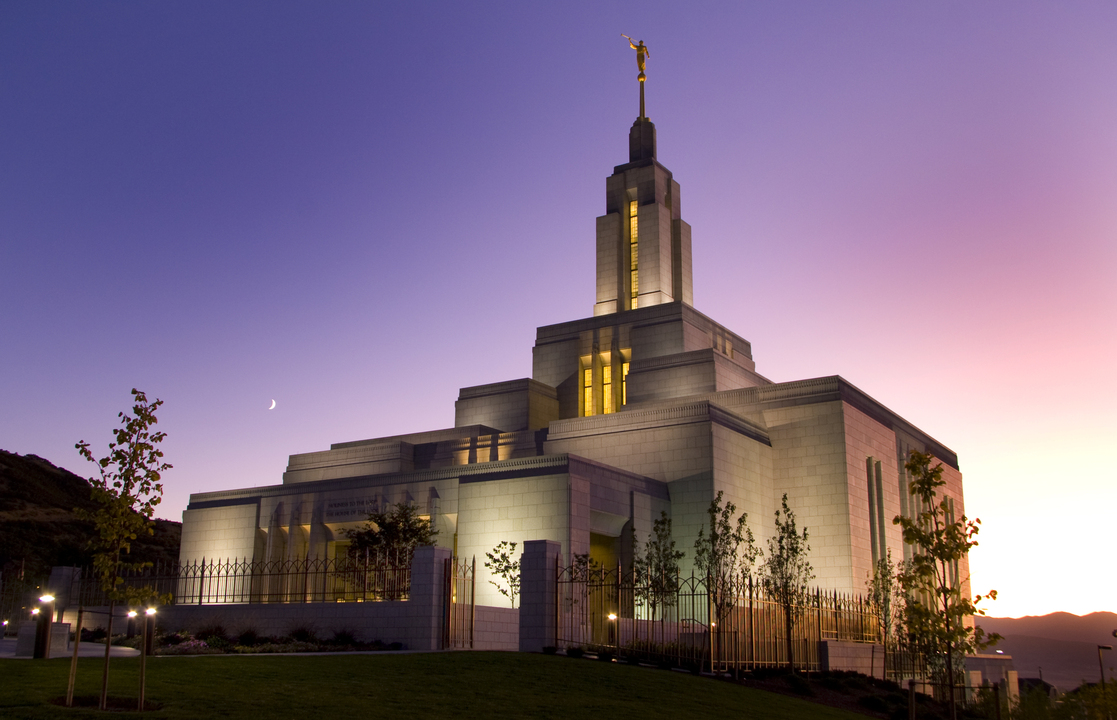 Standing high on a ridgeline near the mouth of Draper's Corner Canyon—featuring 1,021 acres of dedicated open space—the Draper Utah Temple offers a inspiring view of the entire Salt Lake Valley. The beautiful granite edifice shares a site with a meetinghouse and a joint parking lot, constructed at the same time as the temple. Visitors are welcome to roam the beautifully landscaped grounds and take in the spirit of this holy House of the Lord.

All of the art-glass windows created by Utah artist Tom Holdman for the Draper Utah Temple miraculously survived a fire that left only a portion of one window damaged, even though the art studio itself was so badly burned, it was condemned. There are 221 exterior windows, 50 interior windows, and 432 door panels for a total of 35,420 hand-cut pieces of glass. The windows incorporate the Log Cabin quilt pattern used by the early pioneers.

The Draper Utah Temple is built of the finest materials including granite from China, Makore wood from Africa, and limestone from France.

The theme carried through the Draper Utah Temple is of the sego lily—Utah's state flower.

The Draper Utah Temple has the largest sealing room in the state of Utah, seating up to 80 guests.

Ordinance rooms in the Draper Utah Temple feature hand-painted panoramas of mountain scenes, a depiction of Draper's Corner Canyon, and its view of the Salt Lake Valley.

The baptistry of the Draper Utah Temple is located on the downhill western side of the building, which allows for natural light to pass into the room through floor-to-ceiling windows.

During its two-month open house, 684,721 visitors toured the interior of the Draper Utah Temple, making it one of the most widely attended temple open houses in the Church.

During the Saturday morning session of General Conference held October 2, 2004, President Gordon B. Hinckley announced that a third temple would be constructed in the Salt Lake Valley to join the Salt Lake Temple and the Jordan River Utah Temple in serving the rapidly growing number of Church members in the valley. No location was specified at the time of the announcement, spawning lively discussion and speculation along the Wasatch Front.1

Speculation was put to rest several weeks later on Sunday, November 21, 2004, when a letter from the First Presidency was read to Church congregations in the southern Salt Lake Valley announcing Draper as the location of the temple. Rumors of a temple for Draper had already been circulating for quite some time, since—two years earlier—Church representatives told Corner Canyon's developer that the reason for their purchase of additional acreage next to its stake center site was for construction of a temple.2

On February 8, 2005, the Draper City Council unanimously approved a change to zoning ordinances, which removed the only obstacle to construction of the temple. The ordinance permits for "houses of worship" to reach 90 feet high in the residential area of the temple site. This limit, which applies to occupied areas of a building, does not restrict the height of steeples or spires.3

On May 18, 2006, Draper's planning commission approved plans for the temple, which was presented as a 57,000-square-foot facility reaching 166 feet high and capped by a gold-leafed statue of the angel Moroni on a single central spire. A large variety of trees were shown for the grounds in addition to a 492-space parking lot.4

Church President, Gordon B. Hinckley, broke ground and dedicated the site for the temple on August 5, 2006. "It is a great tribute to our people," he said. "They are so faithful in temple attendance and it is for this reason that we construct this beautiful house of the Lord."5

On July 8, 2008, a gold-leafed pedestal and statue of the angel Moroni were hoisted atop the spire of the temple. The Moroni raising marked an important milestone in construction and coincided with completion of the exterior granite facing.