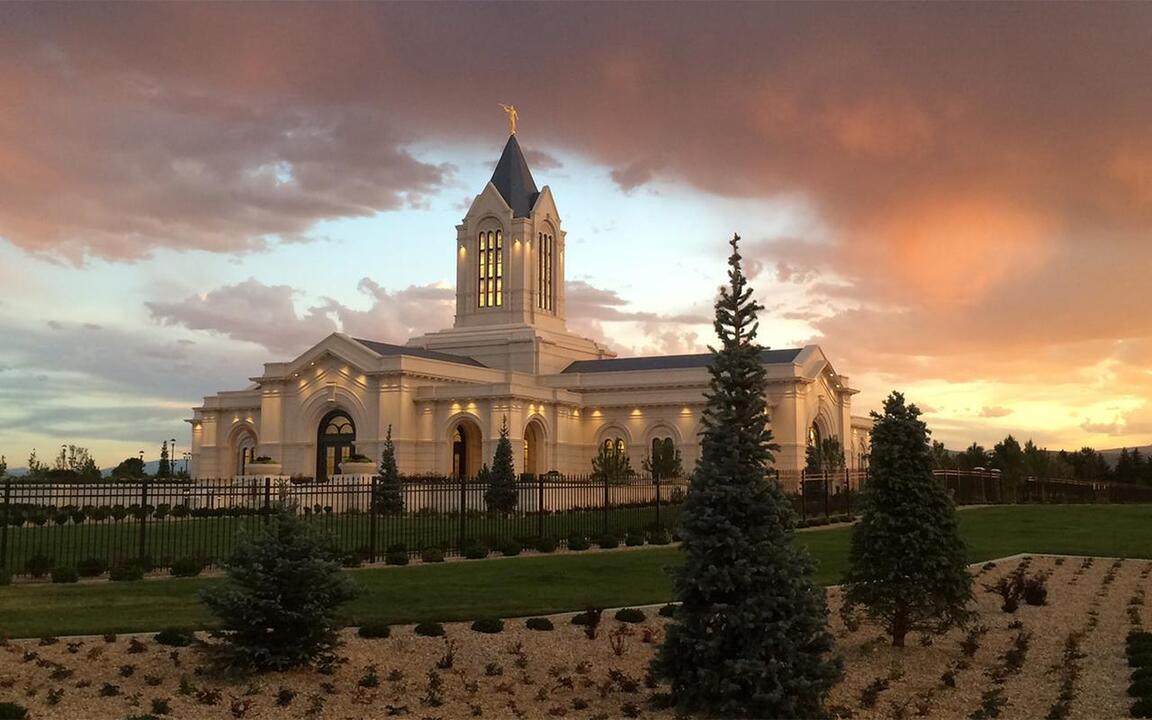 The stately Fort Collins Colorado Temple stands on Majestic Drive at the intersection of Timberline Road and Trilby Road in southeast Fort Collins. A small distribution center shares the property, and a Church meetinghouse is located across the street. The main entrance plaza to the temple is anchored by a beautiful water feature surrounded by numerous planters filled with flowers and shrubs. The grounds are open to the public to enjoy the peaceful environment that emanates from the House of the Lord.

On April 2, 2011, President Thomas S. Monson announced Fort Collins as the site of Colorado's second temple, located approximately 60 miles north of Denver. There were some 140,000 Church members in the state.1 The temple would serve Latter-day Saints living in northern Colorado and southern Wyoming who attended the Denver Colorado Temple or Billings Montana Temple.

On June 8, 2011, the site for the Fort Collins Colorado Temple was officially announced as property located at the southeast corner of Trilby Road and Timberline Road in Fort Collins, across the street from an existing meetinghouse. "We appreciate the many people from Fort Collins who have worked with us during the site selection process," said Russell McClure, president of the Fort Collins Colorado Stake. "We feel this new temple will be a great asset not only to members of the Church in Colorado and the region but also to the people of Fort Collins, who will benefit from the peace and beauty a temple brings."2

On Saturday, August 24, 2013, Elder Ronald A. Rasband of the Presidency of the Seventy presided over the groundbreaking ceremony for the Fort Collins Colorado Temple, marking the formal commencement of construction. In his remarks, Elder Rasband discussed the history of temples in antiquity, drawing parallels to temples constructed in modern times. "In the dedication of Solomon's temple, King Solomon asked 'will God dwell on the earth?' The Lord answered 'my name shall be there.' That sounds familiar to what we're starting here in Fort Collins, Colorado," he said. When the temple is completed, he said, it will be a house of prayer, of revelation, of learning and instruction.3

The statue of the angel Moroni was placed on the Fort Collins Colorado Temple on Wednesday, August 26, 2015. The statue was removed from a crate, attached to a cable, and prepared for its ascent. An audience of Church members, construction workers, and passersby watched with rapt attention as a crane hoisted the statue to the top of the steeple.4

A three-week open house was held for the Fort Collins Colorado Temple from August 19 through September 10, 2016. A total of 105,000 visitors watched a short video presentation on the significance of temples and then walked through the temple interior. Several invited leaders in government, clergy, and education toured the temple including Wyoming Governor Matt Mead and first lady Carol Mead, Colorado Lieutenant Governor Donna Lynn, and Fort Collins Mayor Wayne Troxell.

A day before the dedication of the Fort Collins Colorado Temple, a cultural celebration was performed by young men and women from the temple district who presented the history of the Church in Colorado and Wyoming through song and dance. The event was held at Hughes Stadium on the campus of Colorado State University. President Dieter F. Uchtdorf told the youth to "make the values of the temple the focus of your life. Take on the shine of the life of Christ, and harmony will be among you. Unity will be among you and you will be a majestic example of the principles of the gospel of Jesus Christ."

President Dieter F. Uchtdorf, second counselor in the First Presidency, dedicated the Fort Collins Colorado Temple in three sessions on Sunday, October 16, 2016. At the cornerstone ceremony held just before the dedication, he said, "We seal this [cornerstone] and remind each other that it really is the Savior, it is Jesus Christ, who is the cornerstone in our lives and in His Church, and that's why it is called the Church of Jesus Christ." In his dedicatory prayer, he prayed, "Bless this temple with a mantle of holiness. May it stand as a beacon of everlasting truth and light and as an invitation to come unto Thee. Wilt Thou protect this temple from any harm or defilement. May all who come to this temple do so worthily before Thee. May their hearts be lifted and their minds be elevated to things divine."5

On September 6, 2011, a land-use hearing was held at the Larimer County commissioners hearing room for the proposed site of the Fort Collins Colorado Temple. The property owners' request for a four-lot plat to be reconfigured into three lots and for a residential restriction to be lifted was granted, clearing the way for potential approval of the temple. Some neighbors in the Westchase neighborhood wanted commissioners to deny the request and to stop plans for the temple due to traffic concerns. Others expressed worry over property values, displaced wildlife, and increased vehicle emissions.

Church spokesman Eric Adams noted that the impact on traffic would be minimal, as the temple does not draw large crowds at any one time. Worship is practiced in small groups spread out over the day with the largest room in the temple holding 50 people. The temple and meetinghouse across the street would operate on noncompeting schedules—the temple being used primarily on Fridays and Saturdays with modest use Tuesday through Thursday (closed Sundays and Mondays) and the meetinghouse being used primarily on Sundays with modest use on weekdays.6

On September 14, 2011, a development review outreach neighborhood meeting was held in the Roundhouse Room of Fossil Ridge High School to discuss the development review process for the temple. It was the first of three neighborhood meetings to be held. At the second meeting, sketch plans of the temple would be presented to the neighborhood with time set aside for questions and concerns. At the third meeting, a demonstration would be given to show how public input was considered in the final plan.

On September 20, 2011, a petition was accepted by the Fort Collins City Council to initiate annexation proceedings for the proposed site of the Fort Collins Colorado Temple—an 18-acre parcel located east of S Timberline Rd and south of Trilby Rd. The requested zoning for the annexation was Urban Estate (U-E) where a Place of Worship is a permitted use. A single-family home occupied the property at the time. City staff recommended adoption of the Resolution.

On October 3, 2011, a representative of Landmark Engineering held a Conceptual Review meeting with the City. Preliminary documents reviewed at the meeting indicate that the single-level temple will be 26,600 square feet with a 100-foot spire and 274 parking spaces. A temple president residence is also planned for construction south of the temple.

On October 20, 2011, the Planning and Zoning Board held a hearing to receive public comment on the proposed annexation of the intended temple site. Following the hearing—where no public input was given—the Board unanimously recommended the ordinances to the City Council. This decision was later invalided, however, due to improper notification of the meeting to residents. A second hearing was held on November 3, 2011, where several residents voiced concerns over the proposed development's impact on traffic and on the environment including endangered species. Others expressed their support for the facility, which would beautify the area and not pose the perceived adverse effects.

On December 6, 2011, the temple site was annexed into the City of Fort Collins and zoned appropriately. The City Council held a Hearing and First Reading for the annexation ordinance on November 1, 2011. A Second Reading was held on November 15, which was made official on November 25. A Hearing and First Reading for the zoning ordinance was also held on November 15; the Second Reading was held on December 6. Months of design and approval were still ahead including hearings and approvals for the architectural and site plans, which would be presented to the City's advisory and governing bodies.

On October 15, 2012, the City of Fort Collins Current Planning Division facilitated a neighborhood meeting to discuss the potential development plan for the Fort Collins Colorado Temple. Although a formal application for the temple had not yet been submitted, the proposed building was reportedly 30,000 square feet with roughly 280 parking spaces. The developer's consulting team presented preliminary site plans and gave attendees the opportunity to ask questions and engage in a dialogue with the team. The official rendering of the temple was released to the public in conjunction with the meeting.

On February 21, 2013, the Fort Collins Planning and Zoning Board unanimously approved plans for the Fort Collins Colorado Temple, following a public hearing. Concerns expressed by those in attendance included the height of the steeple and the additional traffic, though it was explained that the temple is designed for small groups participating in religious training and sacred ceremonies.

Plans called for a 30,389-square-foot temple rising 112 feet to the top of the angel Moroni statue. One resident asked that the steeple be lowered to 100 feet, but it was explained that the steeple had already been lowered to its lowest height for visibility throughout the 16-acre site, that steeple height was exempt from the height limit, and that other landmark buildings in the city are taller. The Church did agree to turn off lighting of the steeple and angel Moroni statue by 10:00 p.m. and to widen Timberline Road, adding turn lanes and a sidewalk. Several Westchase residents expressed their support for the project, which would be less intrusive than another high-density residential development and would add to the "rich culture" of the neighborhood.7

"Every foundation stone that is laid for a Temple, and every Temple completed according to the order the Lord has revealed for his holy Priesthood, lessens the power of Satan on the earth, and increases the power of God and Godliness."
—George Q. Cannon