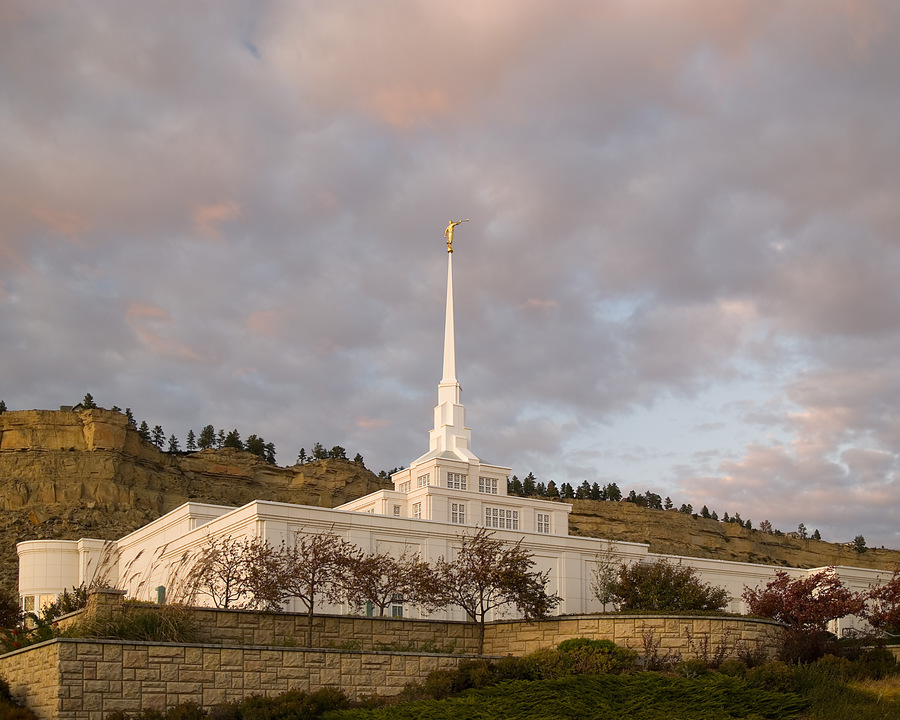 The Billings Montana Temple was the first temple built in Montana.

Billings, Montana's largest city, is a metropolitan hub and commercial and cultural center for a large part of eastern Montana and northern Wyoming. That made it a natural choice for a temple to serve the members of those areas who were filled with faith as the Church grew stronger in the city. Ordinance workers, Maurice and Maude Asay, said at the temple's dedication, "We have believed for the last 25 years that we would have a temple here."

On the exterior, the temple is unique in many ways. The spire, topped by a statue of Angel Moroni, rises from a tiered tower faced with louvered vents that appear to be shuttered windows. The west end of the single story building is accentuated by a stained-glass bay window. The temple grounds are landscaped with lawns, flower gardens and more than 250 trees and 4,500 shrubs. Retaining walls and fence foundations are built of manufactured stones painted to match the prominent, 300-foot-high Rimrock cliffs that border the rear side of the temple property.

Inside, the temple is a model of space efficiency featuring all of the amenities of larger temples—including a laundry, brides' room, chapel, and clothing rental desk—in less total square footage than other recently built larger temples. The temple has two ordinance rooms for a two-stage ceremony. A clear skylight over the main foyer offers patrons a view of the Angel Moroni statue atop the spire.

Sister Rose Griffin Doty of Byron, Wyoming, felt her life was preserved so she could attend the dedication. Sister Doty was born in Burlington, Wyoming, about the time colonists were sent to the Bighorn Basin. Due to her ailing health earlier in the fall, her family arranged a special trip for her to see the nearly-completed temple several weeks before the dedication. However, she said she was strengthened to be able to attend the dedication, in part because she wanted to see President Hinckley with whom she had a special experience. After her husband, Joseph Doty, passed away, she labored in Southern States Mission in the early 1960s and was set apart by President Hinckley. "I have always admired him for his support for me when I was on my mission. I wanted to thank him for a temple and for the prayer he said when he set me apart, which I have always remembered," she said.

Sister Doty is among the many who have faithfully served at the Idaho Falls Idaho Temple in the past and who are grateful that several hours will be cut from the travel time to attend the temple. For many in Montana and Wyoming, the drive to Idaho Falls took from up to six hours in the summer when they could cut through Yellowstone Park, to eight or more hours in the winter when the more direct route was closed.

Emma and Mort Hawkins, who moved to Billings in the 1940s, committed themselves to temple service in the Idaho Falls Idaho Temple despite the long distance from home. They rented in Idaho Falls so that they could live and serve as ordinance workers there. Occasionally, they traveled back to Billings for special family gatherings but, for the most part, dedicated their lives to temple service for more than five years until Brother Hawkins died. Sister Hawkins said, "It was a wonderful opportunity to work in the Lord's house and enjoy the other people there. It was the highlight of our lives besides our family." Now 88 years old, Sister Hawkins is grateful "they're bringing the temples to us. It's going to be good for my family that lives in Billings."1