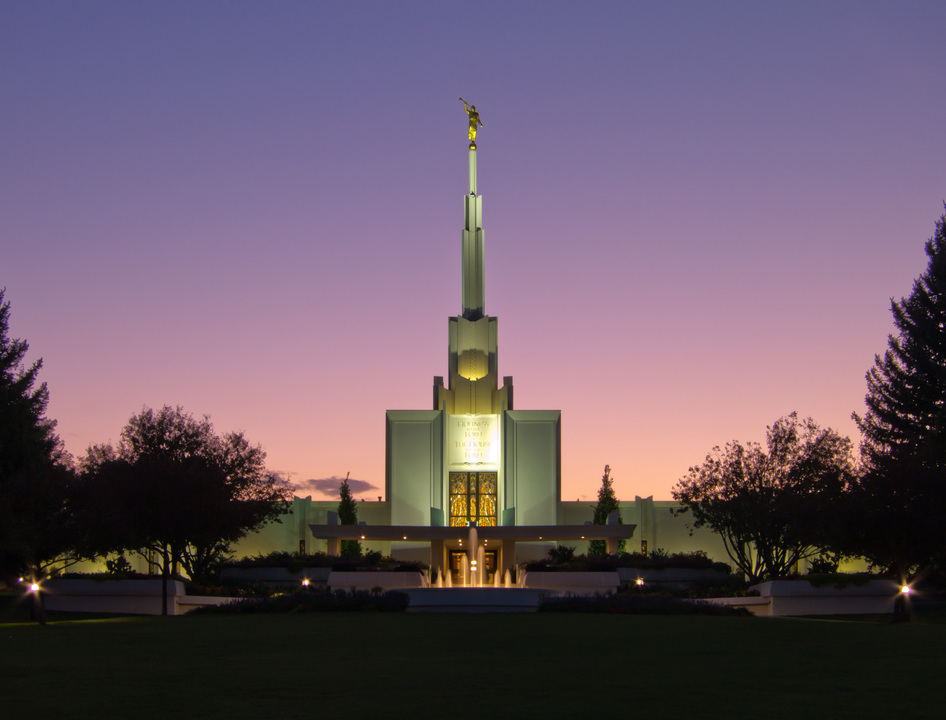 The Denver Colorado Temple is located south of Denver in a beautiful residential neighborhood in the suburb of Centennial. Notable features of the striking white temple and its grounds are thousands of colorful flowers in the growing season, a calming water feature bordered by benches, a wall of colorful stained glass above the temple entrance, and a gold-leafed statue of the angel Moroni atop the heaven-reaching spire.

The Denver Colorado Temple was the first temple built in Colorado.

Historical records indicate that in 1858, the S. M. Rooker family—a member family from Utah—was the first to settle at the site that later became Denver.

In an act of hope and faith, one Denver-area stake started a temple fund years before the Denver Colorado Temple was announced, gathering enough donations to meet its assessment for the construction of the temple far ahead of time.

Securing a suitable site for the Denver Colorado Temple proved difficult. When the originally preferred site became unavailable, two other sites were considered, but both were blocked by traffic-concerned citizens. In the meantime, the original site opened again, and the Church successfully employed lessons learned to gain citizen support for the temple at the preferred location.

Neighbors initially rejected the proposed nightly floodlighting of the Denver Colorado Temple. So, Church officials agreed to turn off the lights by 11:00 PM. In time, however, the neighbors came to appreciate the singular beauty of the temple and asked that the lights remain on all night.

During the three-week public open house of the Denver Colorado Temple, approximately 140,000 visitors toured the building—far more than expected—resulting in the placement of 17,000 copies of the Book of Mormon to members of other faiths and 27,500 guest response cards.

Set aglow each night, the Denver Colorado Temple is—as President Ezra Taft Benson described at the cornerstone ceremony for the temple—a "beacon to members and nonmembers alike…a constant, visible symbol that God has not left man to grope in darkness."

More than 28,000 members attended the 19 dedicatory services of the Denver Colorado Temple where they were honored to hear addresses from numerous authorities in the general leadership of the Church including the First Presidency, ten of the twelve Apostles, ten members of the First Quorum of the Seventy, and Bishop Henry B. Eyring of the Presiding Bishopric.

At a centennial celebration of the Church in Colorado, held September 13, 1997, President Gordon B. Hinckley was presented a pair of Colorado blue spruce trees. He, in turn, presented the trees to Denver Colorado Temple President Russell C. Taylor to plant on the temple grounds. "If you want to call them the Hinckley trees, it's all right with me," he said.

The Denver Colorado Temple closed on August 15, 2011, for a six-week renovation project, which included modernization of the heating and air conditioning systems, roof work, new carpet, conversion of a sealing room into a sealing office, and conversion of the dining room and kitchen into a nonpatron waiting room and temple worker break room.

"What are these which are arrayed in white robes? and whence came they? …And he said to me, These are they which came out of great tribulation, and have washed their robes, and made them white in the blood of the Lamb."
—Revelation 7:13–14