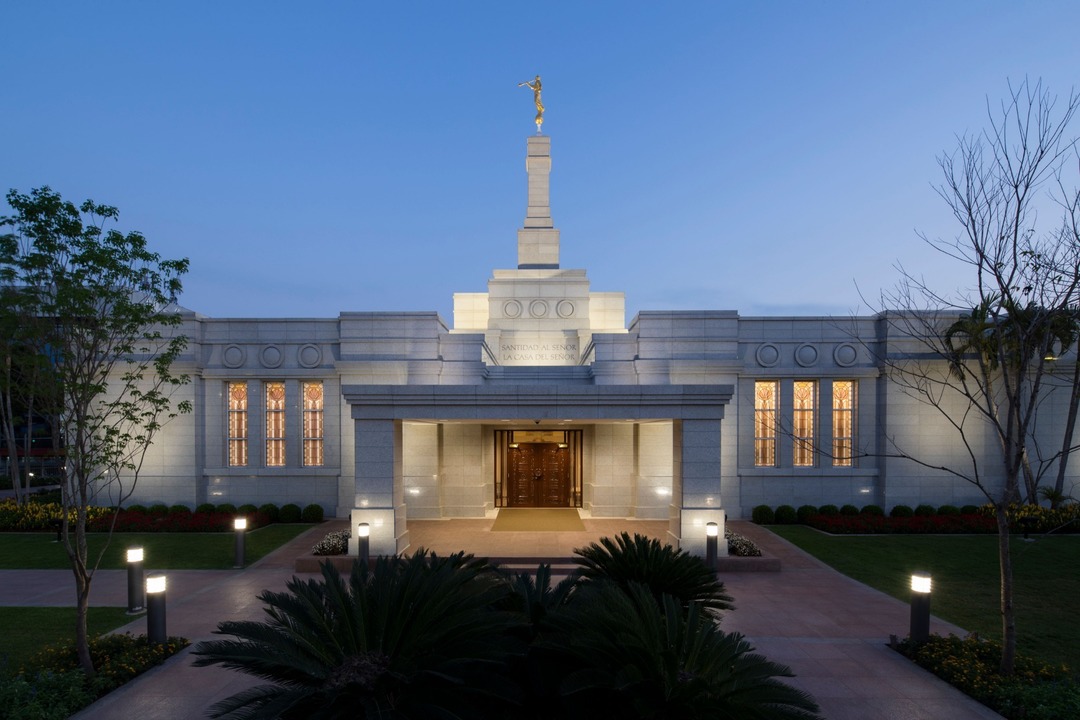 The Asunción Paraguay Temple is located near the center of Asunción in the Mariscal López neighborhood on the corner of Avenida España and Avenida Brasilia—a major city thoroughfare. Sharing the temple site is a meetinghouse, which was constructed as an addition to a former residential mansion and is known locally as Capilla Moroni. Across the street from the meetinghouse are Church offices, a distribution center, and a patron housing facility.

The Asunción Paraguay Temple was the first temple built in Paraguay.

The Asunción Paraguay Temple was built on the site of the first meetinghouse of The Church of Jesus Christ of Latter-day Saints built in Paraguay. The building, constructed in 1964, was demolished to make room for the temple and a new meetinghouse, which incorporated a residential mansion that had been acquired by the Church to increase the size of the property.

Elder Jay E. Jensen, who presided over the groundbreaking ceremony for the Asunción Paraguay Temple, said he felt impressed during the site dedicatory prayer to designate the block for the temple grounds, even though all of the land had not yet been purchased. He said that the hand of Lord opened the path to buy the land needed to complete the temple grounds.

The open house for the Asunción Paraguay Temple generated wide interest from media representatives, civic leaders, and the general public. The week-long event brought 22,482 visitors with nearly 3,000 requesting more information about the Church. Among the invited VIP guests was the First Lady of Paraguay, Mrs. Susana Galli de Gonzalez Macchi, who expressed beautiful words of gratitude for the "magnificent" temple that was being inaugurated in Asunción.

The Asunción Paraguay Temple was dedicated by President Gordon B. Hinckley just two days after he presided over the dedication of the Campinas Brazil Temple. Local media outlets covered the event, featuring quotations from President Hinckley and other Church members who were interviewed.

Once the Asunción Paraguay Temple was dedicated in 2002, every Spanish- and Portuguese-speaking nation in South America had an operating temple. This milestone was reached just 24 years after the dedication of the first temple in South America—the São Paulo Brazil Temple (1978).

The Asunción Paraguay Temple closed on October 29, 2017, for an extensive two-year renovation. It was followed by a one-week open house for the public. The temple was rededicated on Sunday, November 3, 2019.

Faithful Paraguayan members gathered under the clouds of a downpour for the groundbreaking ceremony of the Asunción Paraguay Temple. During the ceremony, the vice chairman of the Asunción Paraguay Temple construction committee, Carlos Roig, stirred to remembrance the delight felt by local members when they received the announcement made during the April 2000 General Conference that plans were underway for building the first temple in Paraguay. Brother Roig paralleled their reaction to the saints mentioned in Mosiah 18:11 who received happy news with great joy. "[We] also responded with joy, tears and appreciation because a temple would soon be built here," he said.

Elder Jay E. Jensen of the Seventy and president of the South America South Area who presided at the groundbreaking, offered the dedicatory prayer giving thanks that the people of this nation would soon receive the fulness of priesthood blessings and ordinances in their own country. He also gave thanks for those persons whose lives would be touched and forever changed by coming to a knowledge of the restored gospel because of the future temple. He expressed desire that the members would dutifully pay their tithes, thus enabling them to receive temple recommends.1