Exterior walls rising; estimated to be completed in late 2023 to early 2024 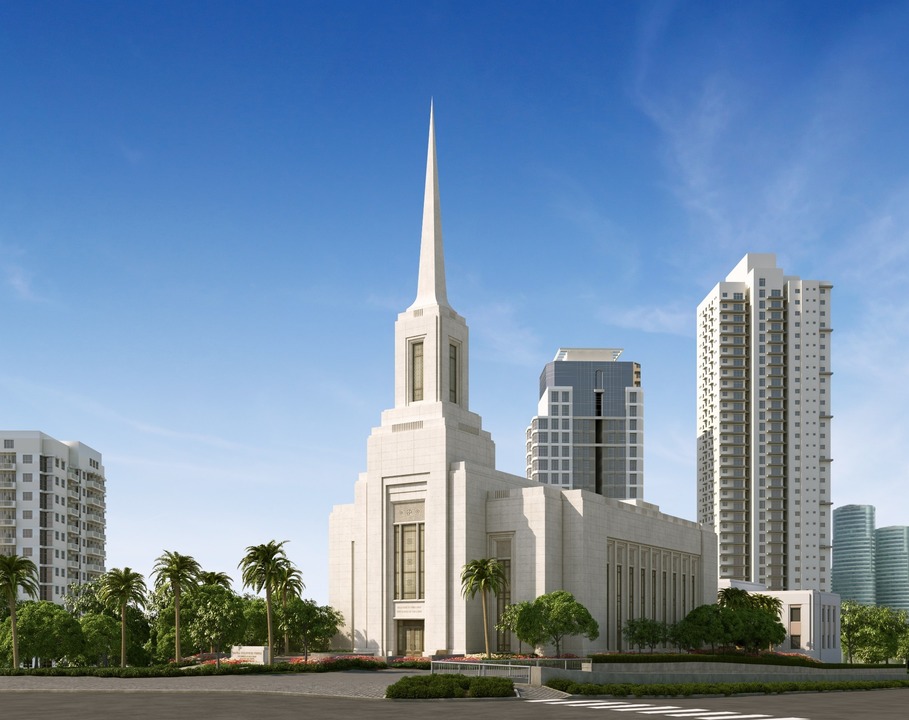 "This is a beautiful place that the Lord has chosen. Through revelation and guidance, it has been found and is now being dedicated to the building of a temple," said Elder Evan Schmutz, Philippines Area President, at the groundbreaking ceremony for the Alabang Philippines Temple held on Thursday, June 4, 2020. The small but sacred service was scaled down to a handful of members to comply with General Community Quarantine (GCQ) rules in place in Metro Manila. In his site dedicatory prayer, Elder Schmutz stated, "[W]e dedicate this chosen ground for the construction of the Alabang Philippines Temple as a house of holiness, a house to be built in Thy Son’s name wherein the important work of salvation may be done." The Area Presidency was directed to conduct the ceremony in coordination with government leaders one month after it had been originally scheduled due to COVID-19 restrictions.1

The Alabang Philippines Temple will be a two-story building clad in granite with a tall, tapering spire over the façade. The interior will be finished using the finest materials and workmanship in woodwork, granite, and decorative painting. Plans also call for the construction of a patron housing facility behind the temple.

The official rendering of the Alabang Philippines Temple was released to the public on February 12, 2020.

Two days after the announcement was made of a temple to be constructed in the greater Manila area, the official Church Newsroom Facebook page for the Philippines stated that the temple would be constructed on the southern side of the Manila metropolitan area in Alabang, Muntinlupa City. The specific site was later revealed as a 2.6 acre property in Filinvest City.

High weekend attendance at the Manila Philippines Temple, which serves over 100 stakes and districts, has created long waits for patrons wishing to participate in ordinance work. The Alabang Philippines Temple will better accommodate temple-attending Saints and provide a closer option for those living on the south side of Metro Manila.

The groundbreaking ceremony for the Alabang Philippines Temple was originally scheduled for Saturday, May 2, 2020 with Elder D. Todd Christofferson of the Quorum of the Twelve Apostles presiding. Due to local restrictions imposed in response to the COVID-19 pandemic, the Philippines Area Presidency was assigned to preside over the ceremony a month later.