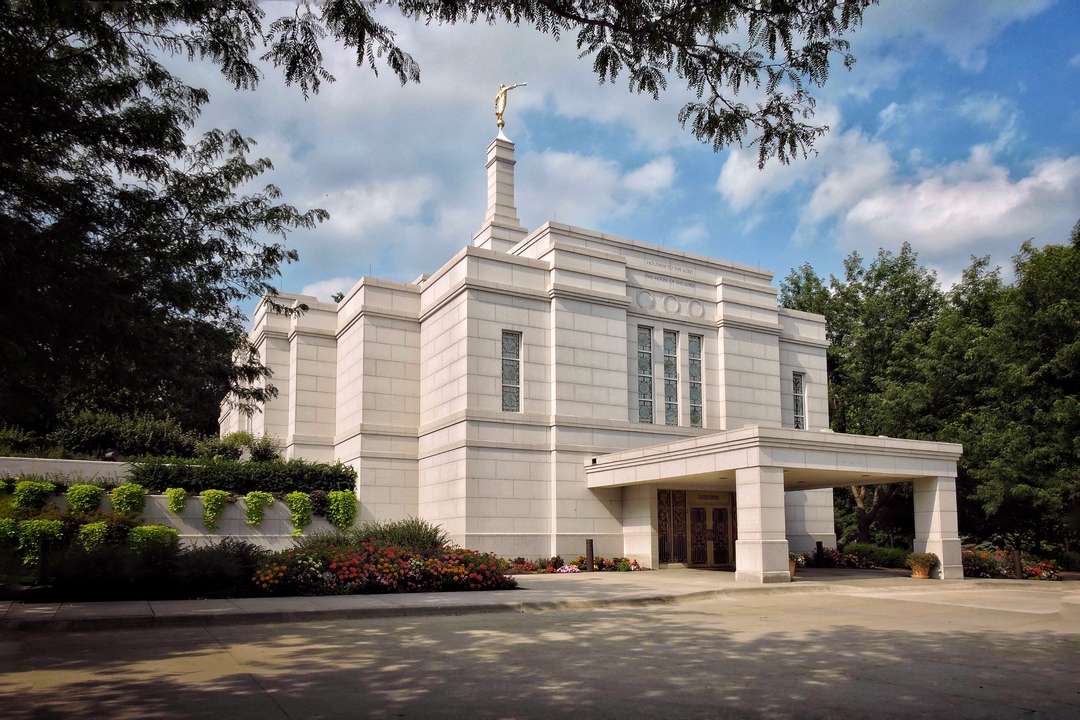 The Winter Quarters Nebraska Temple was the first temple built in Nebraska.

The Winter Quarters Nebraska Temple is a sister building to the Snowflake Arizona Temple.

The Winter Quarters Nebraska Temple is one of three temples built in locations of historic significance for the early Church. (The other two temples are the Palmyra New York Temple and the Nauvoo Illinois Temple.)

The dedicatory services of the Winter Quarter Nebraska Temple were broadcast over the Church's encrypted satellite system to stake centers and Church facilities throughout North America.

Elder Hugh W. Pinnock of the Seventy and president of the North America Central Area presided at the groundbreaking ceremony for the Winter Quarters Nebraska Temple held at the temple site adjacent to a Church-owned pioneer cemetery in Historic Winter Quarters in Florence, a district of Omaha. Nearby is the Mormon Trail Center at Historic Winter Quarters, dedicated in 1997 by President Gordon B. Hinckley. Addressing the congregation prior to giving the dedicatory prayer, Elder Pinnock mused: "It would be impossible to discuss the Winter Quarters groundbreaking and the future temple to be located here without discussing Council Bluffs [Iowa] just across the [Missouri] river, the Mormon Battalion that was mustered there and that departed from that place. And yet, it's difficult talking about Council Bluffs without acknowledging Mt. Pisgah and Garden Grove, Iowa, which also provided temporary places of rest and consolidation for the saints as they left Nauvoo, [Illinois] and as we focus momentarily upon the many pathetic, painful problems the saints had encountered in Nauvoo which led to their expulsion.

We also see, in our mind's eye, the beautiful temple which stood there in Nauvoo and which is now being reconstructed. Or what about the glorious revelations and visitations that occurred in the temple at Kirtland [Ohio], where the Savior appeared along with Moses, Elijah and Elias? Or back still further to Palmyra [New York], where a young Joseph Smith knelt in a grove of trees and there communicated with the Father and the Son and, a little later, Moroni, and from that experience we have the remarkable Book of Mormon." In fact, Elder Pinnock said, the temple groundbreaking at Winter Quarters is in some ways a culmination of a broader chain of events that commenced with the recent temple groundbreaking in Palmyra and continued with the one in Nauvoo in October. "And now, here in Winter Quarters is the third historic site where a temple will be erected in these latter days, where members and non-members will be blessed to have a glorious temple erected on the very spot where we are today."

Elder Truman F. Clawson, visitors center director, who conducted the services, referred to the bronze statue of a father and mother burying their child at Winter Quarters. "Now today," he said, "on this end of the hill, we will take shovels in our hands to dig not a grave but the foundation of a special building, a temple, to be built for the blessing of all who choose to enter that they may also bind together forever their families. And so, the magnificent view from here allows us to contemplate both the past with its dead and the future represented by the beautiful new temple which begins today."

Omaha Mayor Hal Daub also referred to the site. "I hope you felt as my wife, Mary, and I did as we approached this special place, that we indeed are gathered on a promontory, a prominent place, a hillside with its special history and its most significant view, a quiet place, indeed, a historic place," he said. "This promontory has a special significance to this church. It has a special significance to the city of Omaha. And so, on behalf of all the citizens of our community, I want you all to know how delighted we are, how excited we are about the progress that is being made here by the people of this church." He said it is a church "that is growing, that is full of life and vitality and holds hope and promise for the families and for the future of the Church's membership. The Church itself is headquartered in Salt Lake City, Utah, that destination for those who here traveled in 1846 and spent that terrible winter, [and the next year] traveled to that place that became the Church's city promised by God, leaving behind this place, now with the cemetery that is owned by the Church, a beautiful historical center that has been completed, and now the Winter Quarters Temple. So as historic as is this place, it will now become even more historic. And it is for that that those of us who are not members of the Church have great respect and admiration for the endeavors that have occurred and that are now about to occur. Florence is a beautiful place. This high promontory, as it sees the rolling river pass by it, bears the misery and the memory of so many who have been here and who are interred here. Let us always revere, let us always remember and let us recognize this temple will stand as a monument and testament to the good will of God and the peace and harmony of all mankind."1