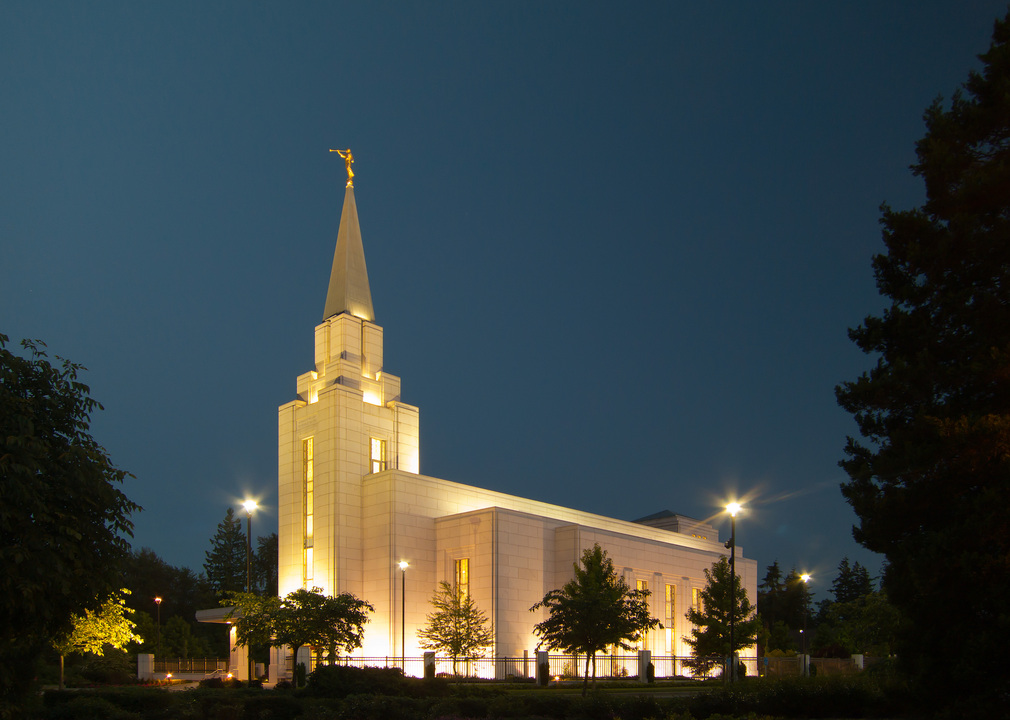 Located on an elevated site near the Trans-Canada Highway, just north of picturesque Langley on the east side of Metro Vancouver, the Vancouver British Columbia Temple stands as an inspiring momument of faith in the Lord, Jesus Christ. Sharing the site are the Langley meetinghouse, which houses Distribution Services, and the temple president's residence. The south end of the property features a grassy and beautifully wooded retreat that has been incorporated into the immaculately kept temple grounds.

On March 10, 2009, to a crowd of about 200 onlookers, the steeple of the Vancouver British Columbia Temple was installed followed by placement of the gold-leafed angel Moroni statue.

The maturation of the Church in Langley began with a small branch organized in the 1950s. Services were held on Norris Road in the home of the Mitchells, who arranged to obtain an old pump organ, built benches from scrap lumber, and rearranged their living room every Sunday morning to accommodate the approximately 20 area members. After a year, membership had grown to 35 members, and the Mitchells received notice of a job transfer to Chilliwack—about 50 kilometers east of Langley. Before leaving, they secured a building location for the branch.1 Growth of the congregation continued, reaching a major milestone on November 21, 1960, when the first stake was created in British Columbia—the Vancouver Stake—with two wards in Vancouver and wards in Chilliwack, Langley, Fleetwood, New Westminster, North Shore, Richmond, and White Rock.2

In 2006, President Gordon B. Hinckley, accompanied by Abbotsford British Columbia Stake President Paul D.M. Christensen, visited the Lower Mainland to examine potential temple sites for British Columbia's first temple. All of the available properties viewed that day had been found wanting, but while driving east on 82nd Avenue from the Langley meetinghouse, President Hinckley gestered toward a beautiful piece of land and declared, "That would be a nice place to build a temple." The 11-acre parcel, obscured by a large hedge, was composed of three smaller parcels—none of which were for sale and one which had recently sold—but the Church eventually acquired each one. The beautiful land is at the highest elevation in the Township.3

A formal announcement from the First Presidency came a short time later by way of letter dated May 25, 2006. When Gerald and Linda McLean of the Calgary Alberta Foothills Stake received the news, they were astonished to discover that one of the parcels the Church had purchased for the temple was their former residence of four years where they had reared two children and given birth to two more before relocating to Alberta. They later learned that the temple itself would stand on their old property. In answer to a letter sent to President Monson's office, the entire McLean family received tickets to the temple dedication.4

A public hearing was held June 18, 2007, at Township Hall to get public feedback on the proposed temple, meetinghouse, and residence, as detailed in the rezoning application. Public concern focused on increased traffic, height of the spire, nightly floodlighting, and environmental impact. Other participants helped allay these concerns by explaining that patron visits are spread throughout the day, minimizing traffic impact, and that sophisticated directional floodlighting prevents overspill onto adjoining land. The temple grounds were described as a neighborhood asset, which feature walkways among gorgeous landscaping—open to the public for daytime or evening strolls.5

Elder Ronald A. Rasband of the Presidency of the Seventy presided at the groundbreaking ceremony for the Vancouver British Columbia Temple on Saturday, August 4, 2007. Beautiful weather and heavenly music accompanied the event—the music being provided by a choir of members from the Lower Mainland. President Paul D.M. Christensen, president of the Abbotsford British Columbia Stake, addressed the congregation, telling the remarkable story of the temple site's selection and acquisition. Numerous priesthood and civic leaders participated in the ceremonial shoveling, marking the formal commencement of construction.6