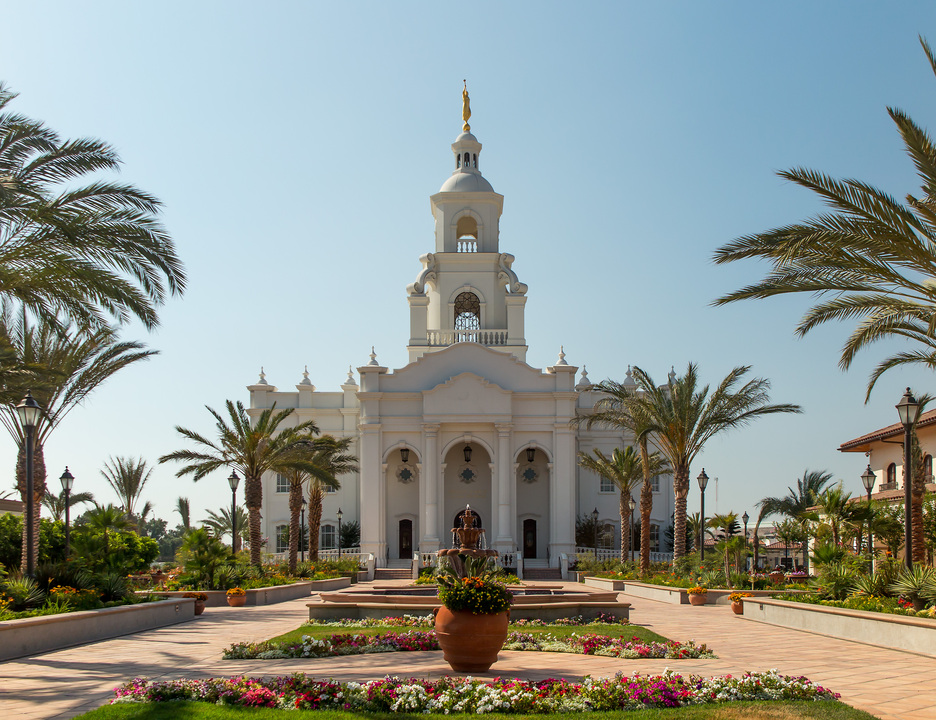 The Tijuana Mexico Temple stands in southeastern Tijuana on Paseo del Río near the beautiful Cerro Colorado, which bears white letters near the peak that proclaim: JESUCRISTO ES EL SEÑOR (Jesus Christ is Lord). The design of the temple reflects the Spanish Colonial influences that characterize much of Mexican architecture, especially the Spanish missions found throughout Mexico and the southwestern United States. The brilliant white exterior symbolizes the holy purpose of the temple, which is crowned with a distinctive central tower, lifting the eyes heavenward. Towering palm trees, a tiered fountain, and colorful landscaping decorate the grounds. Administrative offices, a distribution center, a cafeteria, and other multipurpose facilities also share the temple site.

The Tijuana Mexico Temple was the thirteenth temple built in the country of Mexico and the first built in the state of Baja California.

The Tijuana Mexico Temple was announced by President Thomas S. Monson during the Saturday Morning Session of General Conference on October 2, 2010. Church members in Tijuana belonged to the San Diego California Temple, which stood just 30 miles (50 km) to the north. However, travel restrictions and long delays at the U.S.-Mexico border forced many members to make the 8- to 10-hour drive to the Hermosillo Sonora Mexico Temple to participate in temple ordinances.1

The groundbreaking ceremony for the Tijuana Mexico Temple was held on Saturday, August 18, 2012. Some 2,000 faithful Latter-day Saints gathered. The design of the landmark building—which bears a notable resemblance to old Spanish missions—was chosen for a reason, according to Elder Benjamín De Hoyos of the Seventy, first counselor in the Mexico Area presidency, who presided at the event. "Those early Spanish friars were very valiant in their preaching and building," he said. "And today, we in Mexico are very comfortable with the style of those churches. The temple will be an emblem for the entire Tijuana community."2

The public open house for the Tijuana Mexico Temple brought more than 70,000 guests who toured the sacred edifice. Friends and relatives of Church members were moved to tears by the beauty of the temple and its family-centered purpose.

The night before the dedication of the Tijuana Mexico Temple, hundreds of youth participated in a cultural celebration highlighting the history of the Church in Mexico performed through dance and music.

President Dieter F. Uchtdorf dedicated the Tijuana Mexico Temple in three sessions on December 13, 2015. Thousands of Mexican members participated remotely in the services, which were broadcast to meetinghouses across the country. At the cornerstone ceremony, he called the temple a lighthouse: "It is a wonderful place. It is a place of spiritual celebration. We have had in all of Mexico this weekend a wonderful spiritual celebration. And this temple is the reason."

The dedicatory prayer began, "As we approach Thee in prayer, O God our Eternal Father, we lift our voices in thanksgiving and love on this historic day to dedicate the Tijuana Mexico Temple unto Thee. Our hearts reach out to Thee in faith and prayer. This temple is an answer to the prayers of Thy faithful people, and a fulfillment of Thy promises to them. We are jubilant and our hearts are filled with praise to Thee."3