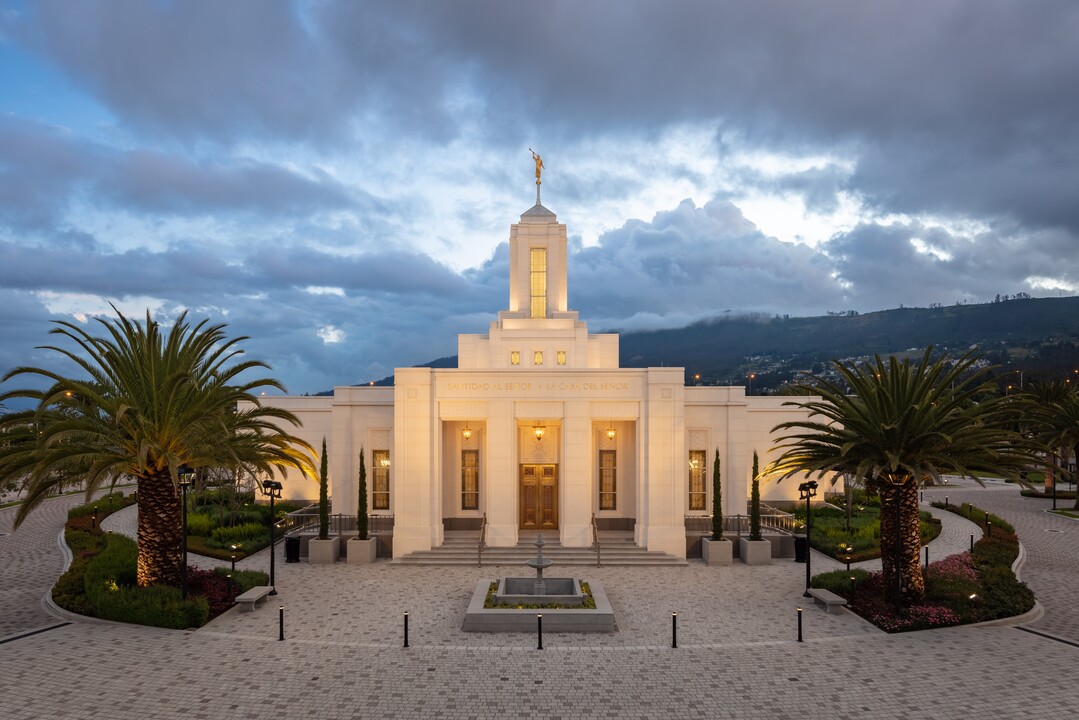 Nestled in a long, narrow valley high in the Andes mountains, Quito is known for being one of the highest capital cities in the world at 9,350 feet above sea level. The Quito Ecuador Temple is located in the eastern suburb of Cumbayá at the junction of Ruta Viva and Escalón Lumbisí in the Tumbaco valley. An L-shaped housing facility shares the temple site, located directly across from the temple entrance. Royal palm trees accentuate the beautifully landscaped temple grounds that may be enjoyed by the public.

Prior to the announcement of the Quito Ecuador Temple, Ecuador was the country with the highest number of members with only one temple. Members in Quito would travel 270 miles to reach the Guayaquil Ecuador Temple. Saints in the Imbabura region, north of Quito, generally arranged 13-hour overnight bus trips to attend the temple, participating in two endowments sessions and a lunch before reboarding the bus and returning home.

On April 3, 2016, during the Sunday morning session of the 186th Annual General Conference, President Thomas S. Monson announced that Ecuador's second temple would be constructed in the capital city of Quito.1 At the time of its announcement, there were seven operating stakes in the city, which is the second most populous city in Ecuador with a population of 2.5 million people. The most populous city is Guayaquil where the nation's first temple was constructed.

The official rendering of the Quito Ecuador Temple was released on March 7, 2019, in conjunction with the groundbreaking announcement.

Elder Enrique R. Falabella, president of the South America Northwest Area, presided at the groundbreaking ceremony for the Quito Ecuador Temple on Saturday, May 11, 2019. Special guests in attendance included the Interior Minister, Dr. Maria Paula Romo, and several religious leaders. Elder Hugo Montoya, a counselor in the area presidency, spoke to the congregation of more than 800 people. "As members we support each other to serve the citizens of this country. The temple will be a refuge. We should not be distressed despite our problems," he said. "If we can be in a safe place, this place is the temple."2

The public was invited to tour the Quito Ecuador Temple from Friday, October 14, through Saturday, October 29, 2022, with no tours held on Sundays. The temple was formally dedicated in three sessions on Sunday, November 20, 2022. Elder Quentin L. Cook of the Quorum of the Twelve Apostles presided.3

The design and manufacture of the exterior artistic stained glass windows were carried out by the Vidrart offices, located in Ecuador. The patterns are abstract florals and the colors that appear are blue, dark green, light green, red, yellow and white, all of which represent the tones of the flowers of Ecuador.

The fountain was designed by the RVC offices, located in Quito. The walls and fountain are covered in natural andesite stone, with an Ecuadorian floral pattern.

One of the most notable design elements that is repeated throughout the temple is the floral motif. This motif was inspired by the geranium, a very representative flower of the city of Quito. The geranium is found in outdoor gardens, local parks and home balconies throughout Quito.

The large and small rugs were designed and made by Rugs International. The embroidered design on the rugs reflects the floral patterns found throughout the temple. Its importance comes from the floral richness of Ecuador, which transmits that air of Quito in the rooms.

The temple stands 320 feet tall and is topped by a golden statue of Moroni, a Book of Mormon prophet who is highly significant to Latter-day Saints for his role in the Restoration of the gospel of Jesus Christ.