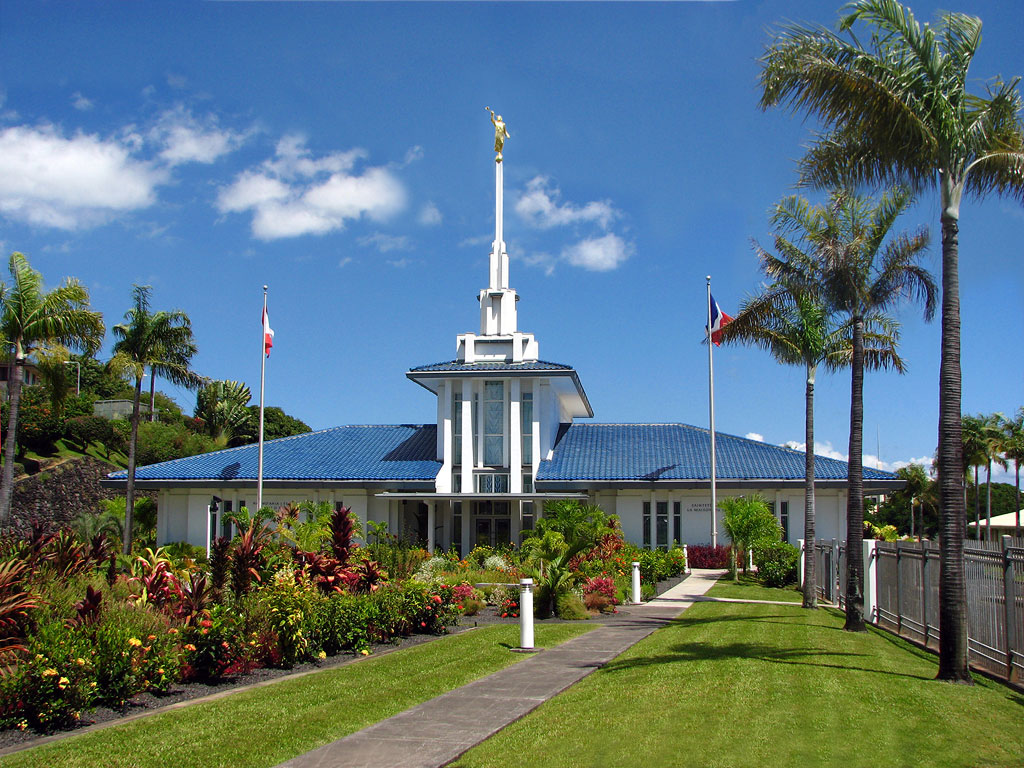 Located in the commune of Pirae in the urban area of Papeete—the capital of French Polynesia—the Papeete Tahiti Temple is characterized by its striking blue roof and meticulously manicured gardens. Visitors are welcome to stroll over the winding sidewalks of the temple grounds to admire the beautiful temple and its surrounding foliage.

The Papeete Tahiti Temple was the fifth temple built in Polynesia and the first built in Overseas France (French Polynesia).

Before the dedication of the Papeete Tahiti Temple, Tahitian members crossed 2,500 miles of the Pacific Ocean to attend the Hamilton New Zealand Temple.

Tahiti's second stake was organized just a year before the Papeete Tahiti Temple was dedicated.

When the Papeete Tahiti Temple opened its doors to the public for a 10-day open house, over 16,000 visitors toured the building.

Under the direction of President Spencer W. Kimball, President Gordon B. Hinckley, second counselor in the First Presidency, dedicated the Papeete Tahiti Temple over a three-day period in October 1983.

During the public open house that preceded the rededication of the Papeete Tahiti Temple, 36,800 people partook of the heavenly setting inside the renovated building.

The Papeete Tahiti Temple was closed in August 2005 for an extensive expansion and remodeling project. It was rededicated in November 2006—23 years afters its original dedication.

The grounds of the Papeete Tahiti Temple were expanded in 2009 after the Church acquired a large parcel of adjacent land, which permitted the addition of more parking and gardens, the straightening of the only access road, and a reconfiguration of the front entrance. These projects improved visibility of the temple as frontage along the main road greatly increased.

In August 2005, the Papeete Tahiti Temple closed for 15 months to undergo an extensive renovation and expansion project. With over 2,000 additional square feet, new rooms were added to the temple including a bride's room, waiting room for non-patrons, and additional office space; the baptistry and one of the sealing rooms were both enlarged; the mechanical and electrical systems were overhauled; and the interior was completely redecorated. The renovation concluded with a spiritually charged public open house attended by 36,800 people.1

Following the open house, the temple's completion was solemnized in a grand weekend celebration commencing with a member meeting presided by Elder L. Tom Perry. He brought the greetings of 96-year-old President Gordon B. Hinckley, who enjoyed the services in Salt Lake City via satellite. Elder Perry addressed the gathering of thousands of saints in a stadium decorated with brightly colored plants and flowers donated by members. "As we try to do our part, in all righteousness," he said, "the Lord will bless us in all things. This is His work that we are praising."2

A spectacular cultural event followed, which climaxed with thousands of returned missionaries marching into the stadium to the stirring hymn "Called to Serve." In a grand display, the missionaries carried the flags of their countries of labor—a sitrring representation of the international influence of this island nation. And in a final grand gesture, a replica of the temple rose among them. Thousands of youth filled the field followed by several families and the new temple presidency dressed in white, crossing the field to the temple.3

Elder Perry rededicated the temple the next day—23 years after its original dedication—in two sessions attended by approximately 10,000 Tahitians from six stakes and three districts. Services were transmitted to local stakes centers and also broadcast via the Church satellite system to Salt Lake City, New Caledonia, and to the BYU-Hawaii campus. "The people are just wonderful," said Elder Perry. "There are not a friendlier people in all the earth than the people here in Tahiti."4