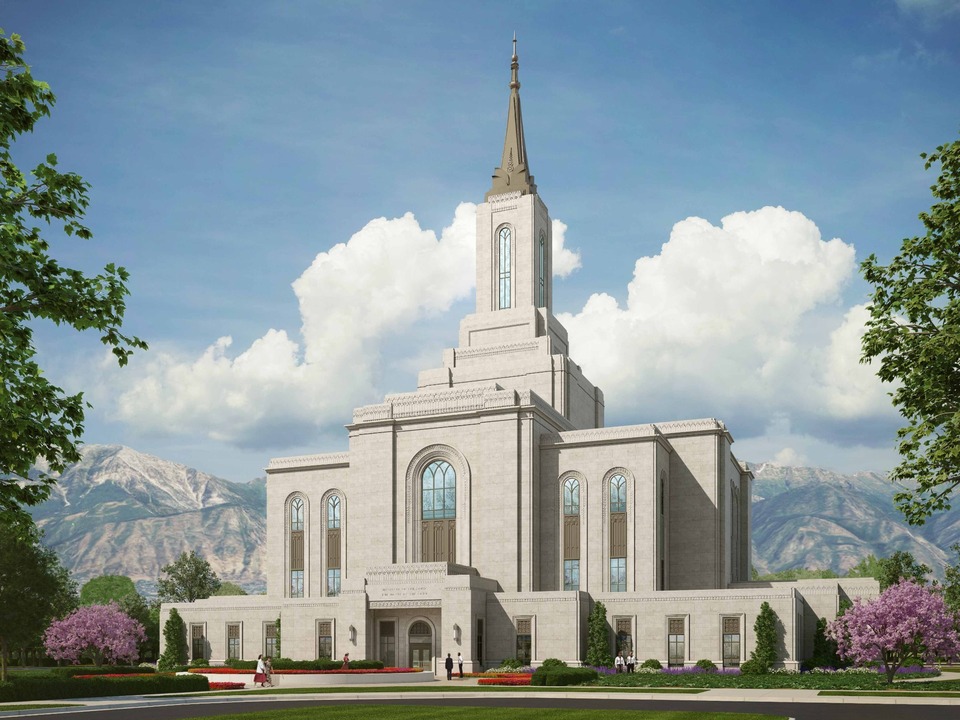 A small gathering of 30 attendees broke ground for the Orem Utah Temple on Saturday, September 5, 2020. Elder Craig C. Christensen, president of the Utah Area, presided at the event and said in his remarks: "The Orem Utah Temple will become an added refuge of strength in an increasingly uncertain world—a holy place where we learn and live more fully the great plan of happiness made possible by our Savior, Jesus Christ." Elder Evan A. Schmutz, a member of the Utah Area presidency who grew up in Orem, said: "[The temple] will act as a beacon, drawing the gaze of millions as they pass by this hallowed ground, and inviting the devoted service of hundreds of thousands of faithful Latter-day Saints, as the ordinances of salvation are offered to the living and the dead."1

On June 24, 2020, an official exterior rendering of the Orem Utah Temple was released.

The Orem Utah Temple will be a three-story building of approximately 70,000 square feet with a central spire. A 20,000-square-foot meetinghouse will also be constructed at the temple site.

On December 11, 2019, the location of the Orem Utah Temple was announced. The temple will be constructed on a 16-acre tract of land at approximately 1471 South Geneva Road in the southwest corner of Orem, just west of I-15 near Utah Valley University.2 The property was purchased in 2004 from a descendant of Latter-day Saint Niels Williamson who emigrated from Norway in 1870. Three of his great-great-grandchildren watched the groundbreaking for the temple from the fence that separates the temple plot from their own land.3

The Orem Utah Temple was announced by President Russell M. Nelson on October 5, 2019, during his closing remarks at the General Women's Session of General Conference. There are 26 stakes organized in the densely populated community of Orem, located between the Provo Utah Temple and Mount Timpanogos Utah Temple. Attendance is very high at these two temples, which were nearly running at capacity before the Payson Utah Temple and Provo City Center Temple were dedicated. The construction of the Saratoga Springs Utah Temple and Orem Utah Temple will further alleviate demands on these temples and provide more opportunities for temple service among the Saints in Utah County.4