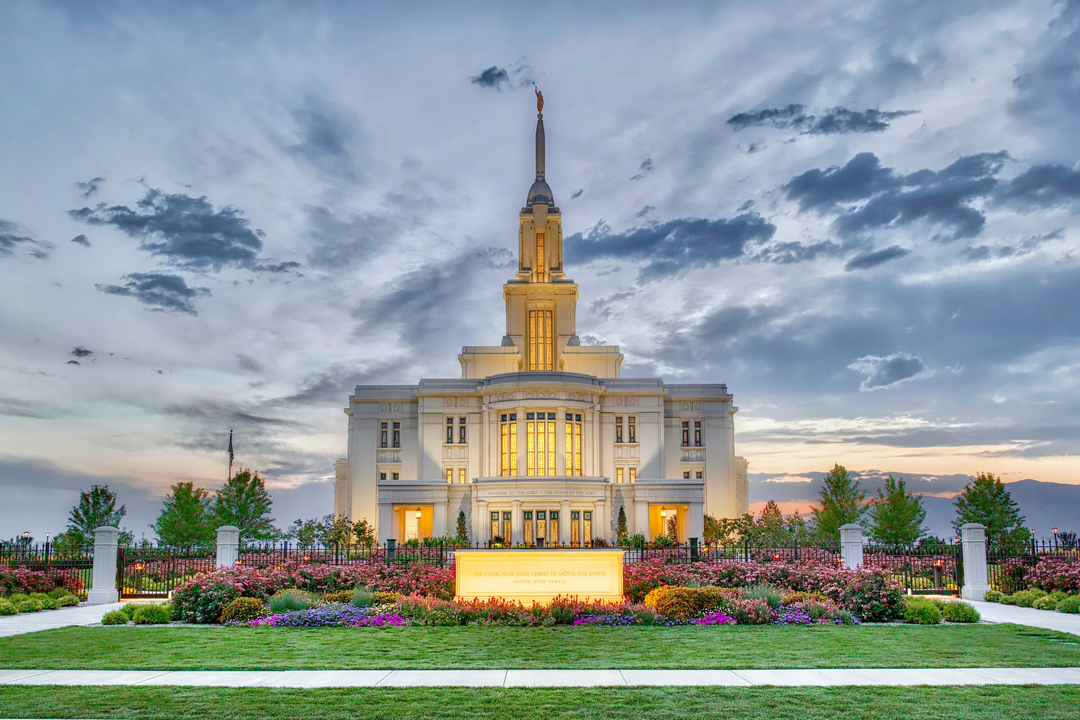 On October 10, 2013, hundreds of community members gathered to the Payson Utah Temple site to witness the raising of the figure of the angel Moroni atop the newly installed spire.

On October 8, 2011, several thousand gathered to the site of the Payson Utah Temple with light rainfall and temperatures in the 30s to participate in a ceremonial groundbreaking. Elder Dallin H. Oaks of the Quorum of the Twelve presided. In his remarks, he noted, "Standing adjacent to I-15, the major north-south artery in Utah, the Payson Utah Temple will be a dominant and visible influence on the millions who pass by here by day and by night."1

On July 14, 2010, City Planner Jill Spencer presented a staff report on the proposed South Meadows Annexation, which would extend the city boundaries of Payson to include 250 acres of land generally located between 1130 South and 1600 South and between Interstate 15 and 930 West, including the site of the Payson Utah Temple. The annexation sponsors requested acceptance in order to finalize donation of the temple site to the Church. Following annexation, the Nebo School District anticipates its own construction project—a new elementary school near the temple to accommodate growing population in the area. Planner Spencer noted that all property owners around the temple are supportive of the annexation and that staff is working to address their concerns. A motion to recommend approval of the South Meadows Annexation was carried.2

On July 21, 2010, City Manager Rich Nelson presented to the City Council a draft outline of a Request for Proposal (RFP) for a master plan for the area surrounding the temple. He explained the need for the plan including assurance that traffic would flow well among Walmart, the Woodbury property, the temple, and the transportation area. A motion carried to approve the RFP but to increase the amount from $30,000 to $50,000 and to have staff prepare another RFP to include hire of a temporary planner.3

On August 4, 2010, City Attorney Dave Tuckett explained that an RFP had not been put out as approved in the previous meeting because Mountainland Association of Government had been contacted to see if its services could be utilized on the project. He indicated that resources were available to assist with boundary coordination with Santaquin and that a coordination of resources from the Church may also be available. The Council agreed to move in this direction. A public hearing was also held to receive input on the proposed South Meadows Annexation. Following presentation of the proposal, a short discussion was held, which focused largely on the rights to keep animals on the property. The City Council made a final decision regarding the annexation based on a review of all pertinent data and public input. No qualified protests to the annexation were received.4

On August 6, 2010, the deed conveying the temple site from the Denise Y. Dehart Revocable Trust to the Corporation of the Presiding Bishop of The Church of Jesus Christ of Latter-day Saints was officially recorded by Utah County.

On April 6, 2011, students enrolled in the Masters of Business Administration program at Brigham Young University made a presentation to the City Council of their analysis of various land use and transportation proposals that may affect the general plan, including recommendations for the Payson City Temple Area. The students proposed residential development around the temple with lot sizes no smaller than 1/3 acre. They explained that low density housing was preferred because it followed the successful model of other temples and that it kept the area less crowded and more open. Their consultation with Church representatives confirmed the preference of residential.5

On December 14, 2011, the Payson City Planning Commission recommended approval of the applications for the temple including allowing a decorative steel fence along 930 West where solid fencing would normally be required. Although the landscaping plan did not include as many trees as required, it included a compensating number of plants and shrubbery—four times the mandated amount. Church project manager for the temple, Nate Perriton, said the goal is to create a sense of openness. The Commission also recommended allowing the Church to defer installment of sidewalks on the undeveloped portion of the property.6

On January 4, 2012, the Payson City Council unanimously approved a set of applications for the temple including a site plan, conditional-use permit, and boundary adjustment. The conditional-use permit allows the temple to stand in an agricultural-residential zone, to exceed the zoning height restriction to a height of 208 feet, and to have fewer parking spaces than required—justified by a shared parking model with the adjoining meetinghouse, which provides an additional 200 spaces, thus exceeding the requirement. The Church indicated that exterior lights would be extinguished nightly at 11:00 p.m., but council members requested that staff work with Church representatives to find a way to keep them on longer without disturbing neighbors. Construction is anticipated to begin in the spring.7

The Payson Utah Temple is located in southwestern Payson on a gently sloping parcel near the intersection of 930 West and 1550 South, adjacent to a recently constructed meetinghouse in the Payson Utah Mount Nebo Stake. The site offers scenic mountain views and a convenient location, just a mile from the 800 South exit of I-15.

On January 25, 2010, President Thomas S. Monson announced plans for the construction of a new temple in Payson, Utah. He said, "Temples answer those soul-searching questions of the purpose of life, of why we are here and where we are going. They are sanctuaries from the storms of life and bless the lives of members of the Church who worship within their sacred walls." The new temple will serve the growing membership in southern Utah County and help alleviate demands on the heavily attended Provo Utah Temple. This announcement brings the total number of operating and planned temples in Utah to 15.8

During the four-week public open house of the Payson Utah Temple, there were 475,542 visitors that toured the building.