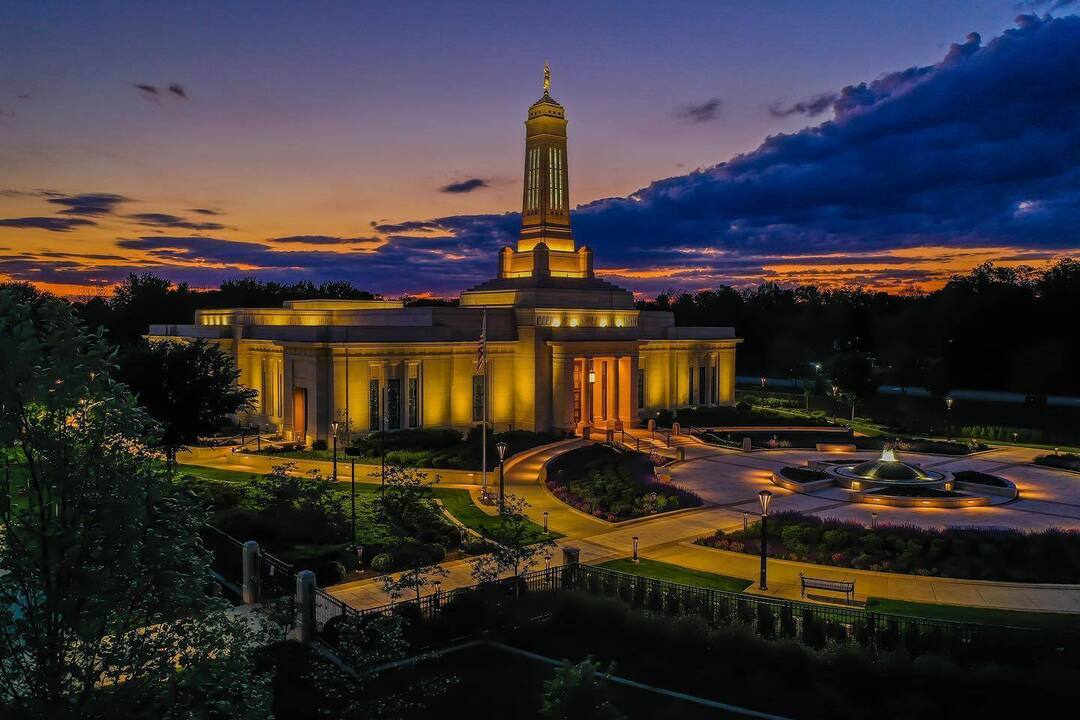 The Indianapolis Indiana Temple stands on the southwest corner of West 116th Street and Spring Mill Road in Carmel, Indiana—a picturesque suburb located on the north end of Indianapolis. The temple is easily accessible from U.S. 31, two miles north of its interchange with I-465. Sharing the temple site is a beautiful meetinghouse with an open courtyard.

The design of the stately spire of the Indianapolis Indiana Temple draws inspiration from the historic memorials and monuments found in the heart of Indianapolis, such as the Indiana World War Memorial and the Soldiers' and Sailors' Monument.

The groundbreaking ceremony for the Indianapolis Indiana Temple was held Saturday, September 29, 2012. Elder Donald L. Hallstrom of the Presidency of the Seventy presided. He was accompanied by Elder Gregory A. Schwitzer of the Second Quorum of the Seventy.

On March 16, 2011, four Church representatives presented preliminary plans to the Carmel Technical Advisory Committee for Phase I of its 48-acre development, which features the Indianapolis Indiana Temple and an adjoining meetinghouse. Parking, maintenance, and operations will be shared between the two facilities, which will operate on noncompeting schedules—the temple being used primarily on Fridays and Saturdays with modest use on weekdays and the meetinghouse being used primarily on Sundays with modest use on weekdays. A utility building will store the power, water, gas, generators, and transformers for both facilities. At the meeting, standard review comments were given by department representatives who were provided copies of the plans for further review.1

On April 25, 2011, Church representative Kerry Nielsen delivered a presentation to the Carmel Board of Zoning Appeals, seeking special use approval to construct a religious complex in a residential zone. The concept site plan was presented along with a rendering of the meetinghouse and of The Gila Valley Arizona Temple, a comparable facility to the Indianapolis temple. During the public hearing, various citizens voiced concerns with the project. Their desires included (1) more time to learn about the project, (2) a traffic impact study, (3) evidence of the impact on property values, (4) a firm commitment to residential—not commercial—for the balance of the property, (5) proper maintenance of the residential land before its development, (6) additional information on the residential development, (7) no changes to the west retention pond, and (8) maintenance of the treeline buffer. Nielsen stood to address these concerns and directed citizens to a website where they could watch unscripted videos of neighbors of other Mormon temples candidly commenting on the impact of traffic and lighting on the neighborhood and on property values.

Staff recommended approval to the Board with two conditions: (1) engineering department approval of the construction documents and traffic study and (2) forestry department approval of an engineered landscape plan. Following staff comments, Board member Leo Dierckman addressed Nielsen, firmly stating the conditions on which he would support approval including a commitment from the applicant to (1) maintain the proposed open space to the west, (2) develop a maximum of 30 residential lots, (3) rename the temple with no reference to Indianapolis, such as Carmel Indiana Temple or Indiana Temple, and (4) complete the Architectural Design, Exterior Lighting, Landscaping & Signage (ADLS) approval process. He paid high compliments to members of the Mormon church for dedication to their faith. After 70 minutes of discussion, a motion was sustained on staff recommendation to table the item to the May 23 meeting.2

On May 23, 2011, the Board of Zoning Appeals resumed its special use hearing where Kerry Nielsen stood to address concerns voiced at the previous meeting. He noted that Church representatives had contacted every neighbor who had expressed disfavor with the project in order to obtain feedback, answer questions, and provide additional explanation. He described the respectful construction practices that would be followed and noted the many favorable aspects of the project including retention of a tree buffer to the west, enlargement and improvement of the retention pond, and cultivation of 60 percent of the temple site as open space. Neighbors stood to express additional concerns including (1) motorists using the new roads around the temple complex as a shortcut from 116th to Springmill during high-traffic hours, (2) retention of the treeline as is—no walkways through the trees or around the pond, (3) increase in traffic not only because of the temple but also because of recently approved developments in the area. Nielsen addressed these concerns, showing graphics of an additional buffer of hedges planned along the treeline and pond; there would be no activity in these areas, but they would be maintained. Staff stated that City engineering and forestry are satisfied with the plans and support the project as a good transition and buffer from residential.

Before going to a vote, Board member Leo Dierckman asked for firm commitments from the applicant including (1) that the tree buffer would be dedicated on the plat as a tree preservation area, (2) that the balance of the property would be developed under S2 residential zoning at a density not exceeding 2.4 units/acres, (3) that a minimum of 200 feet would be maintained between the middle of the road and westmost property line, (4) that an additional buffer would be planted as part of the temple construction project, and (5) that the stub road would be configured in some way to discourage shortcut traffic. Dierckman noted that he had dropped the naming restriction he had imposed in the previous meeting once he understood the naming convention practiced by the Church. Nielsen agreed to these commitments. Following a motion, the members of the Board voted 5-0 in favor of approval of the special use.3

On December 19, 2012, at a Board of Public Works and Safety Meeting, a request for dedication of right of way for the Indianapolis Indiana Temple, submitted by Banning Engineering, was on the agenda.