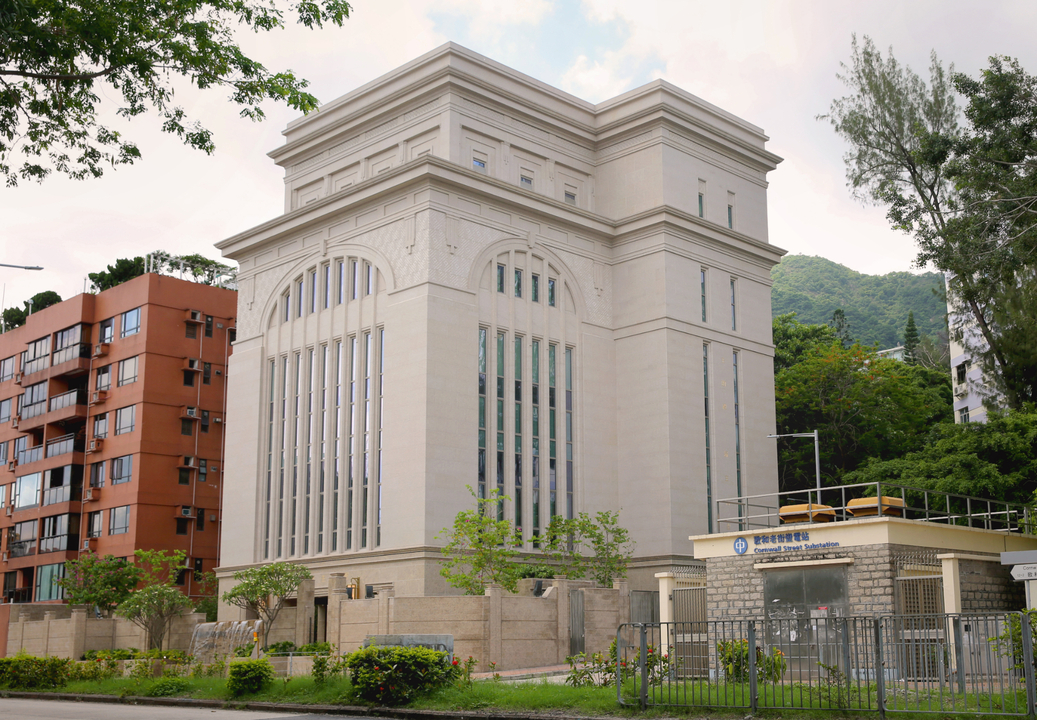 The Hong Kong China Temple is located in the quiet residential district of Kowloon Tong, a suburb of Hong Kong on the Kowloon Peninsula. The striking edifice, inspired by Hong Kong colonial architecture, features vertical columns of art glass, ornamented exterior walls, and a captivating water feature outside the enclosed temple grounds. Across the street from the temple is a three-story Church facility containing a meetinghouse, mission offices, housing facilities, and a distribution center.

The Hong Kong China Temple was the first temple built in China and the second built in mainland Asia, following the Seoul Korea Temple (1985).

The Hong Kong China Temple is the only temple that opens each quarter on Sunday to accommodate members, mostly Filipino sisters, who are employed as domestic workers six days a week.

The Hong Kong China Temple is the only temple to have had a spire and angel Moroni statue permanently removed as part of a renovation. The spire stood atop the building from the time of its dedication in 1996 until its renovation closure in 2019.

Hong Kong was under British rule at the time the Hong Kong China Temple was dedicated, but sovereignty transferred to China just over a year later on July 1, 1997.

The Hong Kong China Temple was originally named the Hong Kong Temple until it was renamed in 1999 following the announcement of a uniform naming guideline.

The Hong Kong China Temple was originally a multipurpose building containing a meetinghouse, family history center, mission office, and apartments, as envisioned and sketched by President Gordon B. Hinckley in the nighttime hours following a pleading prayer for inspiration while on a trip to Hong Kong to locate a site for the temple.

The Hong Kong China Temple originally housed a temple (subbasement, 1st, 3rd, 4th, and 5th floors), a meetinghouse (basement and 1st floor), a family history center (subbasement), a small mission office (2nd floor), and three apartments (2nd floor) for the temple president and matron, mission president and companion, and mission office missionaries. The sealing rooms were located on the 5th floor; the two endowment rooms, celestial room, and women's dressing rooms on the 4th floor; the men's dressing rooms, temple offices, and waiting area on the 3rd floor; the recommend desk on the 1st floor; and the baptistry in the subbasement.

Elder David O. McKay of the Quorum of the Twelve Apostles dedicated China for the preaching of the gospel on January 9, 1921, within the walls of the "Forbidden City" in Beijing.

Elder Matthew Cowley, a member of the Quorum of the Twelve Apostles, and Chinese native Henry Aki officially opened missionary work in Hong Kong by prayer on July 14, 1949, from the Peak—the highest point overlooking the city of Hong Kong.

On January 22, 1994, Elder John K. Carmack of the Seventy presided over the groundbreaking ceremony for the Hong Kong China Temple. "What we do here is spiritually significant and historic as we break ground and start the Hong Kong Temple," said Elder Carmack. "Elder McKay dedicated the land, Elder Cowley commenced the missionary work from the Peak, and we commence a temple to the Lord. This day will loom large for Hong Kong and all of Asia."1

The angel Moroni statue was installed atop the spire of the Hong Kong China Temple on December 12, 1995. Several hundred spectators gathered to witness the Moroni raising. A replacement statue set in place on August 5, 2016, just over 20 years following the dedication. It was permanently removed in 2019 as part of a major renovation of the interior and exterior.

During its public open house, over 13,000 people toured the interior of the Hong Kong China Temple including over 500 VIP guests and 25 ministers of other faiths.

The Hong Kong China Temple was dedicated in seven sessions over two days on May 26–27, 1996. President Gordon B. Hinckley, who presided at the dedication, had participated in the dedication or rededication of all but five of the Church's operating temples. In his dedicatory prayer, he said, "We pray that this harvest of souls may continue, that in the future as in the present, Thy people may be free and secure in their worship and that none shall hinder the service of missionaries called to this area. Bless all who befriend Thy Church, all who defend Thy people, and all who assist those called to teach the everlasting gospel. We pray that Thy work may grow and prosper in the great Chinese realm, and may those who govern be ever receptive to those called and sent as messengers of revealed truth."

Following the dedication of the Hong Kong China Temple, President Gordon B. Hinckley became the first president of the Church to visit mainland China when he arrived in Shenzhen—a "sister cultural city" of the Polynesian Cultural Center in Hawaii.

The Hong Kong China Temple closed on July 8, 2019, for a nearly three-year renovation. The exterior stone was replaced, and the shape and placement of windows changed. The dome, spire, and angel Moroni statue were replaced with a small tower. The floor plan was reconfigured to create a better patron experience, including converting the former meetinghouse space into temple space. Asian-inspired art glass was installed both inside the temple and in the exterior window openings. New furniture and artwork was placed throughout the building.

A week-long open house was held in May 2022, following the renovation of the Hong Kong China Temple. A total of 3,036 visitors toured the interior of the sacred structure.

Elder Gerrit W. Gong, whose mother's family is ethnic Chinese, rededicated the Hong Kong China Temple on Sunday, June 19, 2022. The rededicatory sessions were broadcast across the vast temple district. In his rededicatory prayer, he said, "As we rededicate this temple, we also rededicate ourselves. Please help us live with even more faith and righteousness; even more love and kindness for families and neighbors; and even more care for those in need. Heavenly Father, let this House of the Lord be a place of light, a beacon of truth and testimony."

As part of the renovation, several exterior details were updated while keeping the original design. The primary structure of the building stayed the same but existing concrete was reinforced and a substructure of steel was introduced to attach the exterior stone cladding.

Giallo Ornamental stone was used on the base of the temple up to the first floor, which then transitions to Sunset Gold up to the roof. Both of these stones were derived from the Jianming Quarry in Xiamen, China.

The temple grounds are filled with beautiful flowering trees, shrubs, and groundcover that were chosen to create a place of reverence and reflection. Local horticulturists provided the best options and spacing for each plant throughout the site.

The existing water fountain, exterior fences, and walkways did not change from the original design and layout. The materials were updated, and the stone was replaced with Giallo Ornamental stone.

The Chinese meander motif, also known as the cloud and thunder pattern, can be found throughout the temple. This pattern signifies the cycle of rain: the clouds, and then the thunder, and then the rain, which gives new life.

The carpet carving in the sealing and celestial rooms, which was manufactured by Rugs International, features the cloud pattern in a soft creamy color.

Flooring materials consist of Giallo Tafouk tile and Gold Red Green floral nylon rug, depending on the area of the temple.

Two different types of decorative paint were used throughout the Hong Kong Temple: decorative stencil designs and mural designs. The decorative stencil design is based on the patterns commonly found on ancient Chinese ceramic plates, bowls, and jars. The main design starts in the entry, baptistry and bride’s Room. Slight layers of complexity are added as you move from the instruction room into the celestial and sealing rooms.

The main subject of the Hong Kong Temple art glass is the Yulan magnolia tree, which is a tree native to China. It produces an elegant white flower streaked with light pink. The white flower has been a sign of purity since ancient times. The colors of the art glass represent the natural color and variation of the Yulan magnolia flower. The art glass in the celestial room is meant to act as a traditional Chinese screen with a green border and light golden background color.

The thunder pattern can be seen in the font railing and details of the furniture pieces.

The lighting in the Hong Kong Temple was designed to be a modern representation of the traditional wooden lantern. The chandeliers throughout take the hexagonal shape of many Chinese lanterns. The ornate wooden frame is represented by a simple bronze frame slightly flaring at the top and bottom. Translucent acrylic panels or crystals represent the rice paper lens. A single crystal prism hangs from the bottom of the chandeliers, representing the red tassels that hang from traditional Chinese lanterns.

The interior of the temple is filled with elements that are inspired by ancient Chinese architecture and design. The gypsum board ceiling in the celestial room is patterned after a simple type of Chinese ceiling where minimum beams are used. In a traditional Chinese temple, three of the walls were typically constructed of heavy masonry with wood posts projecting upward. The fourth wall was mainly wood construction and contained portals in and out of the temple.

Decorative millwork throughout the temple showcases three uniquely Chinese characteristics. First, the Chinese screen is used as a decorative pattern on panels and doors. Second, the wood grain of the decorative panels is an asymmetrical swirling pattern that mimics the strong wood grain on traditional Chinese boxes. Third, the fretwork in the upper portion of the ordinance room walls helps give a gardenlike feel to the rooms and is reflective of a motif commonly seen in Chinese design. The hardware features an escutcheon plate with a square patterned border that matches the rhythm of the art glass. The lever was chosen because the hexagonal shape is similar to ancient Chinese bronzework.

The doors are wood with locally sourced hardware.

The thunder pattern can be seen in the font railing and details of the furniture pieces.2