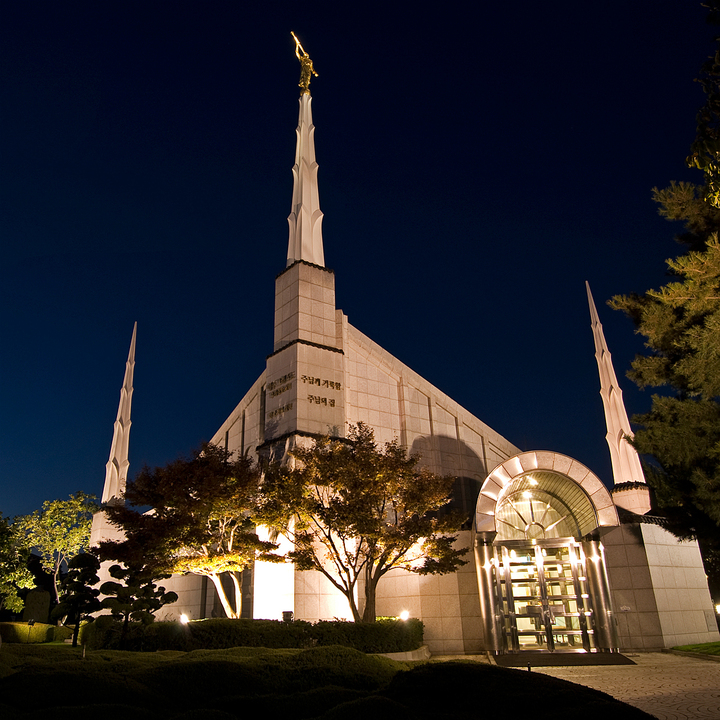 The Seoul Korea Temple stands on a hill overlooking the prestigious Ewha Womans University, Yonsei University, and Sogang University to the south, east, and west. To the north is the expressway to the Gimpo International Airport, Korea's second largest airport. Traveling patrons may stay in the dorm space of an auxiliary building. Surrounding the temple are peaceful, handsome gardens that are open for the public to admire.

The Seoul Korea Temple was the first temple built in mainland Asia (and in South Korea).

Kim Ho Jik, a high-ranking government and educational figure, was the first native Korean to join the Church on July 29, 1951, while attending Cornell University in New York. A son and daughter were among the first four Koreans baptized in their native land.

On August 2, 1955, President Joseph Fielding Smith dedicated the land of Korea for the preaching of the restored gospel on a hill overlooking war-torn Seoul. Kim Ho Jik was among the few participants.

The Korean saints first began expressing their urgings for a temple in Korea beginning in the early 1960s. During that time, Park Jae Am asked Elder Gordon B. Hinckley if there would ever be a temple in Korea. Elder Hinckley reportedly smiled and promised in a very encouraging tone that if the saints stayed close to the Lord and were obedient to the Church that there would one day be a temple in the Land of the Morning Calm.

President Spencer J. Palmer, who became mission president over Korea in August 1965, directed purchase of the Shinch'on property, where the Seoul Korea Temple now stands, in that same year.

The first Korean temple group (six couples) flew to Hawaii on July 31, 1970, after overcoming enormous obstacles including an immigration department policy that did not allow couples to leave the country together except in extremely unusual circumstances—an obstacle that worked against Korean members time and time again.

The first Institute building outside of North America was built on the site of the Seoul Korea Temple several years before the temple was constructed.

Plans for the Seoul Korea Temple were announced just before General Conference in 1981. Contributing to the Church's decision to build a temple there was the Korean's exceptional devotion to honoring their ancestors and keeping their records. One beloved Korean member named Kim San shared his own ancestral records that dated back to A.D. 927.

The Seoul Korea Temple was originally planned to be a very simple structure with just two endowment rooms and a sealing room. However, it was enlarged and redesigned three times primarily because the Korean Saints had given up so much of their savings toward building their temple.

A mission office and meetinghouse were razed to make way for the Seoul Korea Temple.

More than 13,000 toured the Seoul Korea Temple during its public open house.

Although a healthy President Ezra Taft Benson was installed as president of the Church just a month before the dedication of the Seoul Korea Temple, he chose to follow through with plans to send President Gordon B. Hinckley to dedicate the edifice.

Just a few years after the dedication of the Seoul Korea Temple, a major subway entrance was added two blocks away from the temple, making travel for members fast and economical.

"And thou shalt bring Aaron and his sons unto the door of the tabernacle of the congregation, and wash them with water. And thou shalt put upon Aaron the holy garments, and anoint him, and sanctify him."
—Exodus 40:12–13