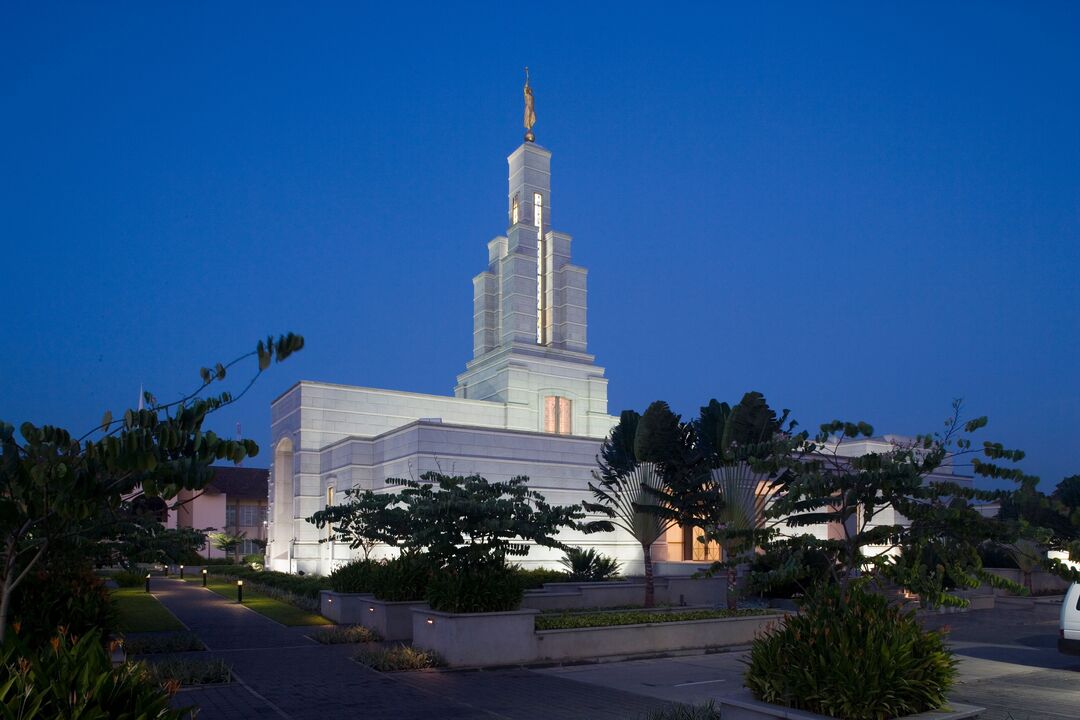 The Accra Ghana Temple was the first temple built in West Africa and the second built in Africa, following the Johannesburg South Africa Temple (1985).

The first Missionary Training Center in Africa opened in Tema, Ghana (just east of Accra) in 2002.

The announcement of the Accra Ghana Temple by President Gordon B. Hinckley came after he had challenged members to make a special effort to fellowship new converts to the Church. "Put your arms around them, make them feel at home. Teach them the doctrines of the kingdom. Befriend them and help them in every way possible," he said. "I make you a promise that if you will do that you will be blessed with a temple in your midst."1

The day of the announcement, at an outdoor gathering of some assembled members in Accra's Independence Square, President Hinckley said, "You've gone a long time without a temple. When I was here five years ago [as a member of the First Presidency], we tried to find a place to build a temple. We didn't find anything and we didn't say anything to anybody. But efforts Monday, February 16, were more fruitful. This morning we approved the purchase of a beautiful piece of ground," President Hinckley announced.2

Ground was broken on Friday, November 16, 2001. Intended to begin at 8:00 that morning, the ceremony was delayed 45 minutes while awaiting the arrival of the Vice President who had returned earlier that morning from New York and graciously accepted an invitation to attend. The combined Christiansborg and Lartebiorkoshie stake choir thrilled the waiting crowd with inspiring music. Upon his arrival, the ceremony commenced; and Elder Nelson gave the concluding remarks. Groundbreaking followed with participation by Elder Nelson, the Vice President, stake presidents, and other dignitaries. The event was covered by a local radio station and Ghana Television.3

Fifteen months after presiding over the groundbreaking ceremony for the Accra Ghana Temple, Elder Russell M. Nelson of the Quorum of the Twelve Apostles returned to the construction site while on assignment to Ghana and Nigeria in February 2003. Ghanian Vice President Alhaji Aliu Mahama, who broke ground for the temple with Elder Nelson, met with the apostle in the Osu Castle. Elder Nelson says, "We have a very good relationship."4

"A temple is a place in which those whom He has chosen are endowed with power from on high—a power which enables us to use our gifts and capabilities—to bring to pass our Heavenly Father's purposes in our own lives and the lives of those we love."
—David B. Haight