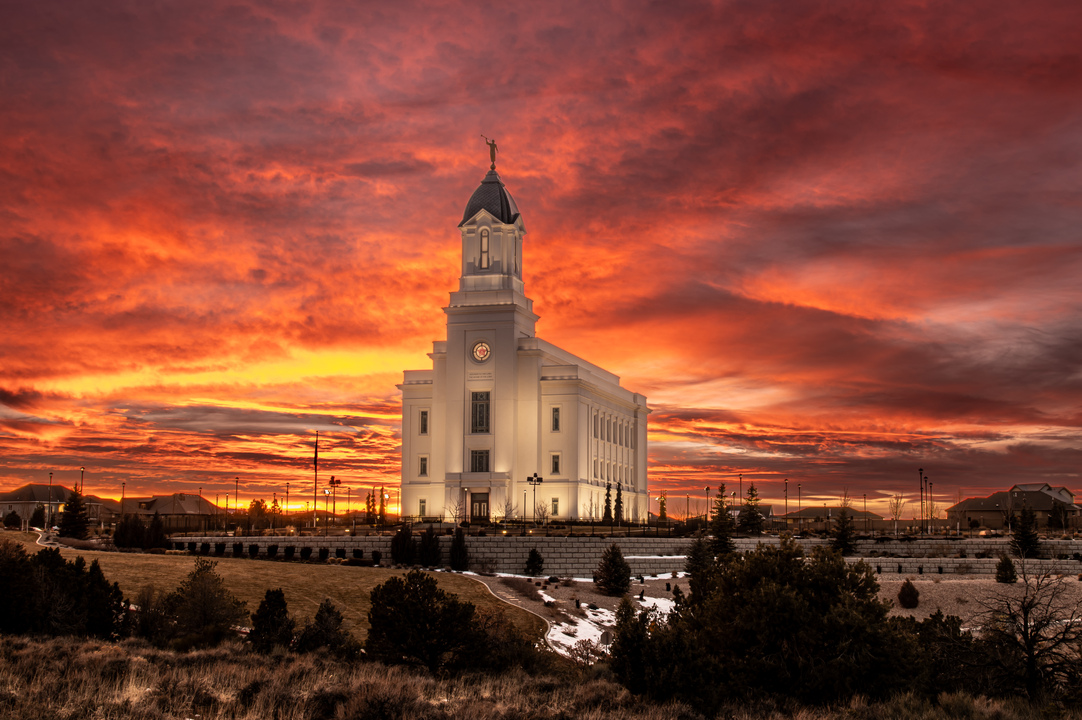 The Cedar City Utah Temple sits high on Leigh Hill, the tree-covered hill that rises west of the city center. The well-groomed site commands a beautiful view of the valley and mountains to the east. The exterior design of the three-story temple shares similarities with the historic Box Elder Stake Tabernacle in Brigham City, Utah. The manicured grounds are open to the public for peaceful strolls or contemplation.

The Cedar City Utah Temple was the seventeenth temple built in the state of Utah and the first built in Iron County.

Shortly after leading the Saints to the Salt Lake Valley, Brigham Young called 100 men to Iron County to extract ore from the rich veins found in Southern Utah. These pioneers traveled to the Cedar Valley where they persisted in hard work and loyalty despite the harsh conditions.

In September 2012, seven months before the announcement of the Cedar City Utah Temple, ground on Leigh Hill was subdivided into three parcels including a 21-acre parcel on the west side of S Cove Dr. The Church finalized purchase of that parcel the following November.1

On April 6, 2013, during the Saturday morning session of the 183rd Annual General Conference, President Thomas S. Monson announced plans to construct the Cedar City Utah Temple.2 Numerous members visited the presumed temple site that weekend, as the acquisition of the property by the Church was already well known.3 Members of the Church in Cedar City had belonged to the St. George Utah Temple, located approximately 50 miles to the south. The temple was serving members from 48 stakes in Southern Utah, Eastern Nevada, and Northern Arizona.

Ground was broken for the Cedar City Utah Temple on Saturday, August 8, 2015. Elder L. Whitney Clayton of the Presidency of the Seventy presided. He was joined by Elder Kent F. Richards of the Seventy and executive director of the Temple Department and Elder Dane Leavitt of the Seventy. "As we break ground, symbolically today," said Elder Clayton, "we remember the founders of Cedar City 167 years ago and remember the broken picks and broken shovels. We stand on their shoulders. They endured much to prepare the area's foundation for a city they would never see." Services were broadcast live to the 17 stake centers in the temple district, allowing Latter-day Saints across the region to participate in the historic event.4

The angel Moroni statue was set in place atop the tower of the Cedar City Utah Temple on September 15, 2016, to a large crowd of onlookers.

The words of the beloved hymn High on the Mountain Top filled Centrum Arena as the youth cultural celebration for the Cedar City Utah Temple began on Saturday, December 9, 2017. Joel H. Johnson—founder of Enoch, Utah, and one of the original pioneers sent by Brigham Young to Iron County—penned the words to the hymn amidst the rigors of settling the harsh environment: "High on the mountain top, a banner is unfurled. Ye nations, now look up; it waves to all the world. In Deseret's sweet, peaceful land, on Zion’s mount behold it stand!" The youth production was aptly named A Light on a Hill, Iron in Our Will.5

President Henry B. Eyring, first counselor in the First Presidency, dedicated the Cedar City Utah Temple on December 10, 2017. At the cornerstone ceremony, he paid tribute to Brigham Young and the early pioneers saying, "I know that he’s looking down on us right now, and I think we owe something to him and to the pioneers who must be so aware of this day. We honor them as we now seal the cornerstone."6

In his dedicatory prayer, President Eyring plead with the Father: "We seek Thy favor, our Father in Heaven, upon all those who reside in the temple district and all who visit here. Bless the students and their families who gather here. Prosper them as they honor Thee and Thy Son. Forbid the adversary from having power or influence over them."

The exterior is primarily of precast concrete panels with sections of gypsum fiber reinforced concrete. Forterra of Salt Lake City, Utah, did the fabrication and installation.

The design of the glass reflects local flora in a traditional style and was used in all windows, including those in the tower and exterior doors. Architectural Nexus and Holdman Studios of Lehi, Utah, designed the glass, which was fabricated by Glass Images of Orem, Utah.

A mixture of native plants and traditional ornamentals appropriate for the climate beautify the grounds. Reflecting the natural environment of southern Utah, they require minimal maintenance. The landscape architect was Architectural Nexus, and the landscaping was installed by Intermountain Plantings of Bluffdale, Utah.

Fencing is of a premanufactured ornamental steel product by Ameristar of Tulsa, Oklahoma, with custom steel pilasters at gate locations. All are painted dark bronze. Walkways are natural concrete with geometric, decorative control joints. Both entries feature a paver pattern using stone from Brown’s Canyon in Heber, Utah. Installation was by European Stone Company of Salt Lake City.

Carpeting throughout the temple was manufactured by Bentley Prince Street of Industry, California, and designed by Architectural Nexus. Sealing and celestial rooms feature carpet carvings by Half Moon Studios in Salt Lake City, Utah. The rug in the bride’s room was manufactured by Rugs International in Shanghai, China, from a custom traditional pattern with indigenous flora. Stone and tiles from Israel, Turkey, Spain and Iran were provided by Dal-Tile in New York City, New York, using designs created by Architectural Nexus. They were installed by European Tile of Salt Lake City.

The interior art glass, designed by Architectural Nexus and Holdman Studios, is found in the second level chapel and transoms over some doorways and features designs mirroring local flora. Etched decorative glass of traditional style is used in the baptistry area. Two historic windows from the old Astoria Presbyterian Church in Queens, New York, adorn each entry lobby. Holdman Studios of Lehi, Utah, performed their restoration.

Patterns on the millwork represent the flora of the area and are of the traditional Sheraton style. In the celestial and sealing rooms millwork is highlighted with gold leaf. The wood used in the inlay designs of the welcome desks in the entry lobbies is mahogany, larch, and sapele and makore from Africa. Architectural Nexus designed the millwork and decorative patterns.

The top railing is a decorative sapele piece, designed by Architectural Nexus. The glass panels surrounding the font are etched in a traditional Sheraton style with corner panels featuring a floral pattern. Metals throughout are bronze or other bronze-finished metals.

The traditional rail and stile door is of sapele, and the metal hardware is antique bronze, made by Historic Arts and Casting of West Jordan, Utah. Decorative patterns and millwork used are of the local flora and in traditional style.

Paint in varying degrees of lightness is used throughout the temple. The bride’s room features a wall covering made by Lee Jofa located in Dallas, Texas. The celestial and sealing rooms have a wall covering by Lincrusta. An embossed material with a heavy texture, it is painted in place.

Decorative paint using floral and traditional patterns and medallions and moldings were used in the sealing and celestial rooms. Crown moldings are found throughout the temple, growing larger and grander during the progression to the celestial room.

The temple’s original artwork includes “Field of Choice” by Chris Manwaring, Utah; “Kolob Canyon Evening” and “Bryce Canyon” by David Meikle, Utah; “Kolob Canyon” by Linda Curley-Christensen, Idaho; “Circle of Cliffs” by Ken Stockton, California; “With Healing in His Wings” by Michael Malm, Utah; “The Kolobs” by Frank Magleby, Oregon; and “Neither Do I Condemn Thee” by Del Parson, Utah.