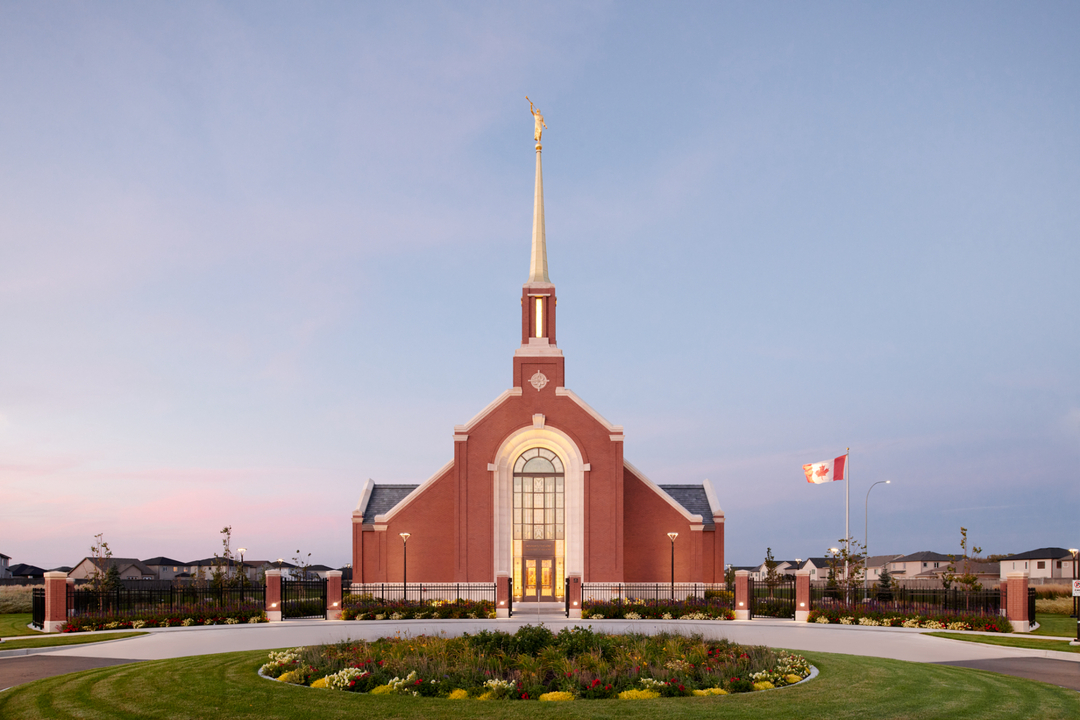 The Winnipeg Manitoba Temple stands on a beautiful tract of land at the entrance to The Neighbourhoods of Bridgwater located in the southwestern portion of the city. The design for the temple draws inspiration from the churches of early Winnipeg. It features a red brick exterior, slate roof, and gold-colored spire over the main entrance. Original art glass windows depict the prairie crocus.

The Winnipeg Manitoba Temple was the ninth temple built in the country of Canada and the first built in the province of Manitoba.

During a twelve-city tour of Canada in 1998, President Gordon B. Hinckley addressed an audience of over 1,500 members who had gathered in the Winnipeg Manitoba Stake Center to hear the prophet. He complimented the Saints and said, "I have asked your stake president how far you go to the temple. Some drive 14 hours." He continued, "Some time you will have a temple. But not now. Keep on driving. I urge everyone of you, don't wait for it." In his closing remarks, he promised, "Every man, woman, boy and girl in this Church is important. The Lord will bless you as you serve Him in righteousness."1

Thirteen years after President Hinckley's visit, President Thomas S. Monson announced the construction of the Winnipeg Manitoba Temple at General Conference on Saturday, April 2, 2011. President Monson had served as president of the Canadian Mission from 1959 to 1962. He was instrumental in leading the growth of the Church in eastern Canada and spoke often about his experiences there.

A community open house was held on August 25, 2016, for elected officials, multi-faith leaders, neighborhood group leaders, community residents, and local Church leaders regarding the proposed Winnipeg Manitoba Temple. Attendees viewed site plans, elevations, and a colored rendering of the temple. Information was presented on the history of the Church in Manitoba as well as the purpose and significance of temples to members of the Church. The architect shared specific information regarding the building and plans for construction in the Bridgwater Forest community. Great interest, enthusiasm, and anticipation were evident as attendees asked questions and made comments.2

On September 12, 2016, shortly after the community open house was held, plans for the Winnipeg Manitoba Temple were officially approved by the local government.

The formal groundbreaking ceremony for the Winnipeg Manitoba Temple was held on Saturday, December 3, 2016, at 12:00 noon. Elder Larry Y. Wilson of the Seventy and executive director of the Temple Department presided at the services, which were broadcast to local Church meetinghouses for the general public. Invited community, government, and interfaith leaders were also in attendance.3

At a special devotional broadcast held on Sunday, October 24, 2021—a week ahead of the dedication of the Winnipeg Manitoba Temple—Elder Gerrit W. Gong of the Quorum of the Twelve Apostles submitted three invitations to the listening youth. He said: (1) If your circumstances permit, please plan to attend the October 31 dedication of the Winnipeg Manitoba Temple. (2) Commit today to live worthy to hold a temple recommend; then use it to bless others. (3) Let the holy temple "draw you close to God our Eternal Father and His Beloved Son, our Savior and Redeemer Jesus Christ."4

The fifteen-day public open house for the Winnipeg Manitoba Temple was held October 9 through October 23, 2021. Invited guest tours began two days earlier on October 7. "We know that the Latter-day Saints in Manitoba and Northwestern Ontario are excited to share this sacred space with their friends and neighbors," said Elder Arnulfo Valenzuela, the second counselor in the Church’s North America Central Area presidency. "This is the first temple in the province, and we believe it will be a wonderful addition to the community."5

On Sunday, October 31, Elder Gerrit W. Gong of the Quorum of the Twelve Apostles presided at the four dedicatory sessions for the Winnipeg Manitoba Temple. It was the first temple to be dedicated in 20 months due to postponements made in response to the COVID-19 pandemic. Elder Gong counseled: "Find joy on the covenant path. You will find the Savior at the center of everything connected to the temple. Become part of the wonderful excitement and blessing of the work of salvation for family members and friends on both sides of the veil."6

The original design of the exterior called for Tyndall Stone, the native stone of Manitoba. However, the material, a dolomite limestone, was deemed too soft for the building. Instead, the choice was made to use a classic Park Rose red brick together with limestone for all the decorative stone elements. This design makes the Winnipeg temple unique because it is the first temple done in red brick that is not a remodel or renovation. The exterior also features accents of San Sebastien granite along the base of the building.

The style of the temple was based on the concept of a little English country church. The design was influenced by the Copenhagen Denmark Temple, as well as small country churches in Canada, the United States and the United Kingdom. The building has a cruciform plan with a protruding entry and steeple tower.

The exterior fence is fabricated with black painted-steel picket panels between brick and stone masonry gateposts. The brick matches the Park Rose brick on the temple, the stone cap is Indiana limestone and the base is San Sebastien granite from Quebec.

There are 128 trees planted on the temple grounds, including shade, flowering and evergreen varieties. There are also over 1,000 shrubs.

The roofing is a terra cotta clay tile that resembles natural slate. The Slate Gray Ludo slate tiles were manufactured in New Lexington, Ohio, by Ludovici Roof Tiles. The roof materials were installed by Westwood Roofing of Winnipeg.

The interior was designed to have an understated classical elegance that would not detract from the sacred ceremonies that occur in the temple. The rooms are done in soft purples, aqua and green. The Prairie Crocus, the provincial flower of Manitoba, is a prominent motif throughout the temple. It is seen in the art glass, rugs, woodwork carvings and door hardware.

Manitoba is known as the Keystone Province because of its location in the country. Arches and keystones are a prominent feature throughout the temple, beginning with the large entry portal.

The altars in the Instruction Room and Sealing Room are made of wood from Canada and upholstered with mohair fabric from Italy and Belgium.

The art glass throughout the building features the Prairie Crocus design in purple, green and gold. The glass was created by the architectural design team and Holdman Studios in Lehi, Utah, and installed by Glass 8 of Winnipeg.

There are two original pieces of artwork in the temple. A painting called “The Work of the Sabbath, John 5:12” hangs in the main corridor just past the entry. The painting “Why Weepest Thou” is located just outside the Bride’s Room. The artist of both pieces is Albin Veselka of Rexburg, Idaho.

The porcelain mosaic blue tile in the font basin and the marble in the font base were fabricated in Turkey and installed by Antex of Winnipeg. The glass panels were created by Vitrum in Langley, British Columbia. The guardrails have an African Mahogany handrail. The newel posts and support structure are machined from solid aluminum, finished in a bronze-coloured powder coating. They were fabricated by General Metals of Winkler, Manitoba. The twelve oxen supporting the font are a bronze-finished resin casting fabricated by 3D Art in Salt Lake City, Utah.

The decorative paint in the Bride’s Room, Instruction Room, Celestial Room and Sealing Room features geometric elements with the Prairie Crocus. It was installed by Jenny Baker of Foothills, Alberta. Prefinished decorative casting for the ceiling bulkheads and upper friezes were fabricated by Allen’s Commercial Arts in Logan, Utah.

The doors throughout the building are fabricated with rails and stiles and feature decorative patterns in African Mahogany. They were supplied and installed by Art Magic Carpentry of Winnipeg. The decorative antique brass hardware was fabricated in India by Arte Hardware.

The stone tile found throughout the temple was quarried in Turkey and installed by Antex of Winnipeg. The main tile is called Mieli Sand and the accent tile is called White Cliffs. The carpet was fabricated by Bentley Carpet of California. The carpet carving in the Celestial Room and Sealing Room was done by Halfmoon Studio of Salt Lake City, Utah. The handmade area rugs in the main entry corridor and the carpet in the Bride’s Room were designed specifically for the temple and feature the Prairie Crocus. They were made in Guangdong, China.

The furniture in the temple is done in neoclassical style using Sheraton and Hepplewhite furniture. The chairs and sofas were made by companies in Italy, North Carolina, Michigan, New York and Utah. Several of the desks and tables feature the Prairie Crocus motif.

The light fixtures are in traditional, neoclassical and Romanesque styles and are made of crystal and brass with an antique gold or gold finish. The fixtures were fabricated by St. Louis Lighting in Missouri and Swarovski Lighting of Plattsburgh, New York. The installation was done by McCaine Electric of Winnipeg.

The medium-stained millwork is African Mahogany. The cornice moldings, window casings and panel molding are made of Canadian Poplar. The millwork was fabricated and installed by Art Magic Carpentry of Steinbach, MB.

The instruction spaces have wainscot paneling made of wood moldings with a stone base. The wainscot begins with less detail in the first room in the temple and transitions to more detailed design in the Instruction Room and Celestial Room. The wainscot was fabricated and installed by Art Magic Carpentry of Steinbach. The walls in the Celestial Room and the Sealing Room feature damask wall inserts made in Korea.7

"Temples are the greatest university of learning known to man, giving us knowledge and wisdom about the Creation of the world. Endowment instructions give guidance as to how we should conduct our lives here in mortality."
—Robert D. Hales