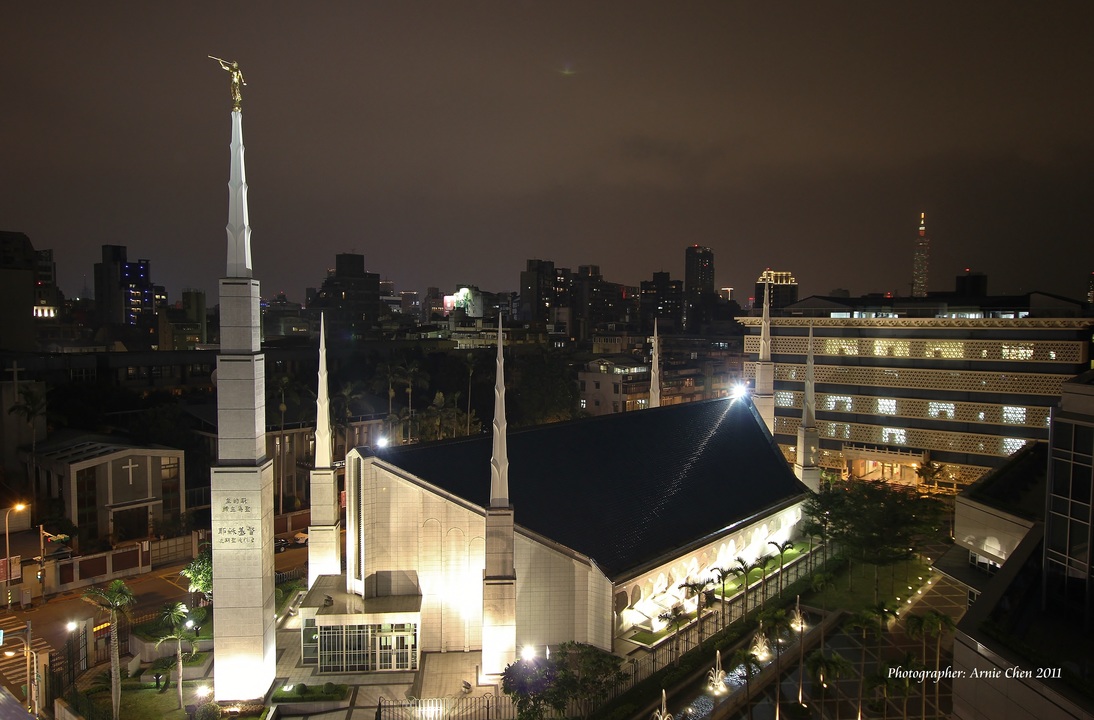 Situated just east of the National Chiang Kai-shek Memorial Hall on Ai-Kuo (Love of Country) Road, the Taipei Taiwan Temple stands out in its urban setting for its elegance and lofty spires. Adjoining the temple are other church buildings including a stake center, patron housing facility, and office building. Mature trees, terraced landscaping, and a striking series of fountains beautify the surrounding grounds.

The Taipei Taiwan Temple was the third temple built in Asia and the first built in Taiwan.

At the first regional conference in Taiwan, held August 14, 1975, President Spencer W. Kimball explained the purpose of the temple that had been announced for Tokyo, Japan. "You, too, can have one," he said. "We leave the blessings of the Lord upon you, upon your posterity, and upon this land."

The mission home in Taipei, which stood next to the stake center, was razed to make way for the Taipei Taiwan Temple.

The Taipei Taiwan Temple was constructed with respect for local tradition including a stunning blue tile roof that complements nearby National Chiang Kai-shek Memorial Hall.

The open house of the Taipei Taiwan Temple attracted over 20,000 visitors including high-ranking government officials, prominent businessmen, and religious leaders of other faiths. Many requested the missionaries to visit them.

Both protesters and adorers descended on the Taipei Taiwan Temple during its public open house. Protesters, sent by a Protestant group in Hawaii, attempted to disrupt the event by creating a commotion outside the gates, though they were kindly invited to tour the temple and view informative displays. Other visitors who toured the temple were captivated by the spirit of the building—many expressing that it was the most beautiful building they had ever seen.

At the time the Taipei Taiwan Temple was dedicated, there were three stakes on the island. Twenty-five years later, membership had grown to ten stakes and two districts.

At the dedication of the Taipei Taiwan Temple, President Gordon B. Hinckley noted that a prison once stood on the temple site. He taught that through the sacred ordinances of the temple, the Lord had provided a way to release souls from their spiritual prisons.

Citizens of Taipei are so impressed by the beauty of the Taipei Taiwan Temple that it has been nominated as one of the most beautiful buildings in the city and studied numerous times by students of architecture.

"In my distress I called upon the Lord, and cried to my God: and he did hear my voice out of his temple, and my cry did enter into his ears."
—2 Samuel 22:7