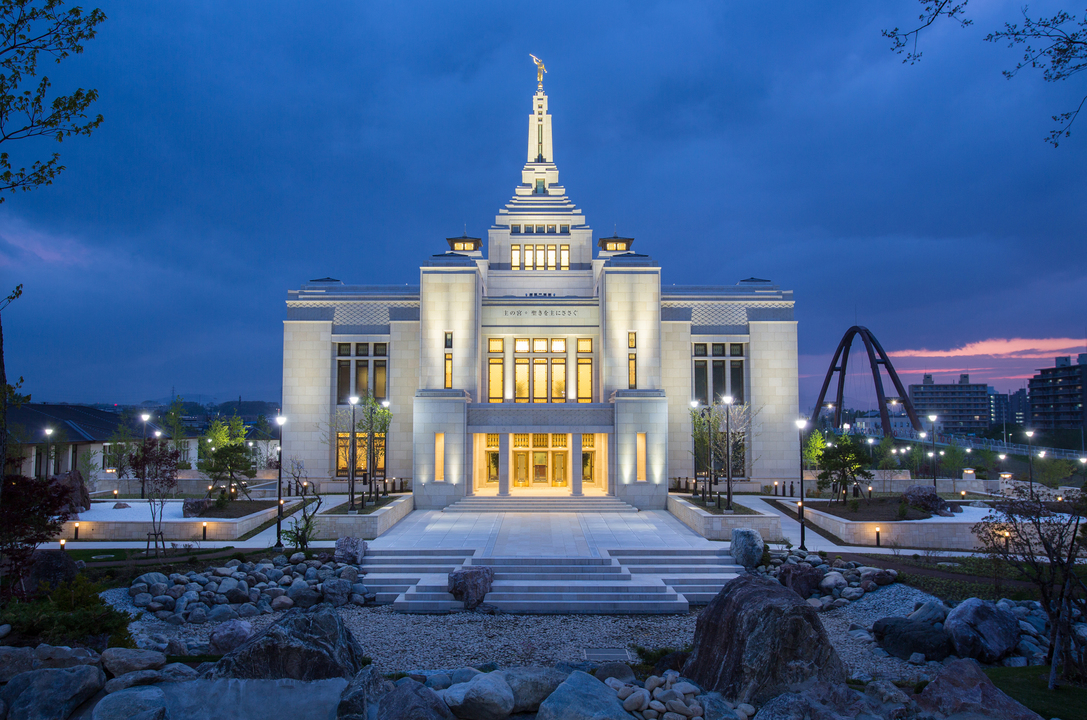 The beautiful Sapporo Japan Temple anchors a complex of supporting buildings including an arrival center, a patron housing facility, a temple missionary housing facility, a combined residence and office for the Japan Sapporo Mission, and space for a future meetinghouse. The captivating architecture and grounds of the temple offer the beauty of Japanese culture and tradition, featuring distinctive trees and plants, large landscaping stones, and an enchanting pond and waterfall spanned by a pedestrian bridge.

The Sapporo Japan Temple was the eighth temple built on the continent of Asia and the third built in the country of Japan, following the Tokyo Japan Temple (1980) and the Fukuoka Japan Temple (2000).

Missionaries of the Church first arrived in Sapporo in 1905. By 1924, the mission had closed, leaving behind a handful of members—most of whom could not be located following World War II. When the mission reopened in 1948, missionaries returned to Hokkaidō, and the Church began to grow. As early as the 1960s, Hokkaidō members held to a belief that a temple would be built among them one day as described at the groundbreaking ceremony by Elder Koichi Aoyagi in a reflection of his own missionary experience there: "I was a missionary here in Hokkaidō 46 years ago. The members in the Sapporo Branch back then said to me, 'Someday we will build a temple in Sapporo.' I am happy that this day has come."1

On July 17, 1949, Elder Matthew Cowley made the first prophecy regarding the temples of Japan during the dedicatory services for the old Tokyo mission home—now the site of the Tokyo Japan Temple. Elder Harrison Ted Price, a missionary serving in the Northern Far East Mission, recorded in his journal: "In this prayer, he told of countless blessings from the Lord that have been enjoyed here to date, and went on to prophesy—'there will someday be many church buildings—and even TEMPLES built in the land.'"2

On October 3, 2009, President Thomas S. Monson announced the construction of the Sapporo Japan Temple during the Saturday morning session of the 179th Semiannual General Conference.3

News of the announcement—so long desired by the Saints of Hokkaidō—was met with shouts for joy, prayers of gratitude, and tears from an overwhelming sense of the Spirit. President Hiroyuki Domon of the Sapporo Japan West Stake said, "My heart was literally burning like a fire. There are no words to express my joyous feelings." He further explained, "We started to have one vision five years ago. 'Let us build a temple in this northern island.…It is our dream, it is our mission.'…We have prepared ourselves so that we may be worthy to enter the temple and the Lord has given us the greatest blessing."4

On May 2, 2010, the location of the Sapporo Japan Temple was announced as a large parcel of land on the Atsubetsu River, adjacent to the campus of Hokusei Gakuen University. A charming, well-known pedestrian bridge decorated with colorful circles and supported by a soaring, graceful arch—known locally as "Rainbow Bridge"—crosses the river at the north edge of the temple site. The land was once occupied by the Shin Sapporo Golf Center and offers convenient access from the Hokkaidō Expressway and the Ooyachi Subway Station.5

On Saturday, October 22, 2011, Elder Gary E. Stevenson, president of the Asia North Area, presided at the groundbreaking ceremony for the Sapporo Japan Temple with his counselors, Elder Michael T. Ringwood and Elder Koichi Aoyagi, and their wives. Tents, umbrellas, and plastic raincoats were in abundance as wind and rain showered over the services. "I am thankful for this historic groundbreaking—even in this downpour," Elder Stevenson said. "Everything today was wet with rain, but the spirit of the saints was not dampened at all. They came with their hearts open and with complete joy as they saw the image of the temple at the groundbreaking ceremony. You could see that their eyes and hearts were just filled with joy to know that they are going to have a house of the Lord on the island."6

The former prime minister of Japan, Yukio Hatoyama, was a special guest at the groundbreaking. He flew to Sapporo to participate in the ceremony, and in his brief remarks, he pointed out the contribution of the Church and its members to the people of Tohoku, following the devastating earthquake and tsunami that struck in March 2011. "You have made many social contributions in a spirit of service. I cannot express my feelings toward the quiet service you have rendered with kindness on behalf of the people." Prime Minister Hatoyama joined in the ceremonial turning of ground, and as he left, he paused to wave to the crowd. The congregation erupted into spontaneous applause as a reflection of gratitude to this former leader of their nation who honored them with his presence on a wet but special day.7

A two-week open house was held for the Sapporo Japan Temple from July 8 through July 23, 2016, where more than 13,000 guests took the opportunity to tour the interior of the building.

On Saturday, August 20, 2016, the youth of the Church in the area participated in a cultural celebration to honor the history of Japan and the history of the Church in the country. President Russell M. Nelson said, "We have the exciting privilege of being part of this latter-day work, when the gospel will go to every nation and those people of Japan particularly now will be able to have all the blessings of the temple."

President Russell M. Nelson of the Quorum of the Twelve Apostles dedicated the Sapporo Japan Temple in three dedicatory sessions on Sunday, August 21, 2016. He was accompanied by Elder Gary E. Stevenson, also of the Quorum of the Twelve, and Elder Larry Y. Wilson of the Seventy and assistant executive director of the Church's Temple Department. All sessions were broadcast to meetinghouses throughout Japan. In his dedicatory prayer, President Nelson prayed, "We thank Thee for Thy blessings to this nation of Japan and its people. Wilt Thou bless the leaders and citizens of this land, that harmony and courtesy may be preserved in their culture. Please bless Thy children here to keep Thy commandments and prosper in this land."8