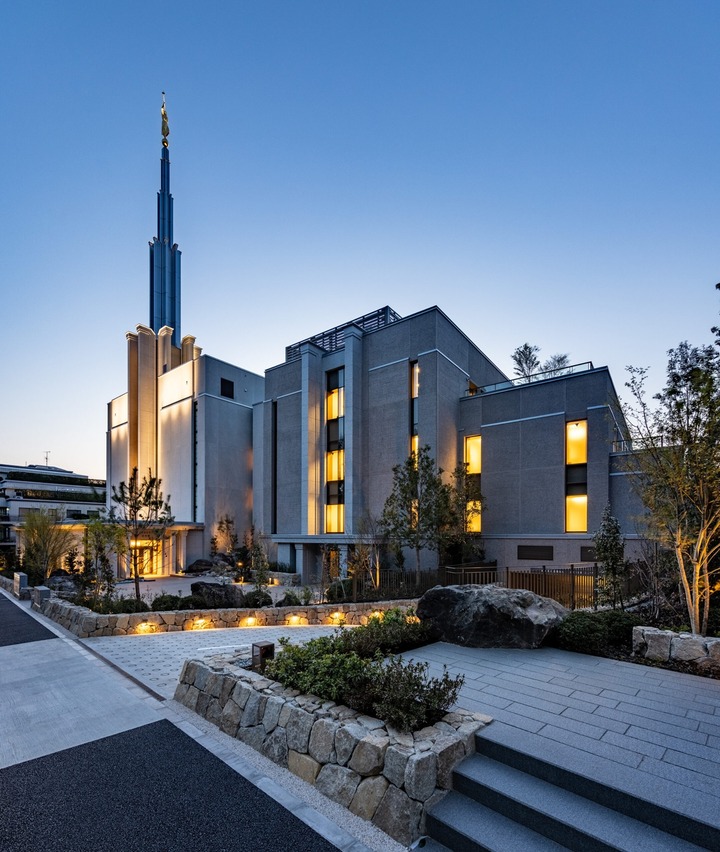 Structural steel and reinforced concrete faced with 289 panels of precast stone, having the appearance of light gray granite

The Tokyo Japan Temple is located in one of the loveliest residential areas of Tokyo across from the lush vegetation of historical Arisugawa Memorial Park. The site was chosen for its location near many schools and embassies. Transportation to the temple is excellent, as only a five-minute walk is required from the Hiroo subway station. Next door to the temple is a four-story annex building that functions as a meetinghouse, patron housing facility, arrival center, visitors' center, family history center, area and mission office building, and underground parking facility.

The Tokyo Japan Temple was the first temple built on the continent of Asia (and in the country of Japan).

The Tokyo Japan Temple was the first temple to be built in a non-Christian nation.

The Tokyo Japan Temple had originally been named the Tokyo Temple until it was renamed in 1999 following the announcement of a uniform naming guideline.

The Tokyo Japan Temple is one of only two temples where a traditional groundbreaking ceremony was not held. (The other is the Paris France Temple.)

The Tokyo Japan Temple was originally a multipurpose building containing a distribution center, an apartment for the temple president and matron, and housing for temple workers and patrons in adjoining annexes.

The original floor plan of the Tokyo Japan Temple included two instruction rooms and a celestial room on the fourth floor; a chapel, five sealing rooms, and ordinance worker space on the third floor; dressing rooms, a bride's room, and a temple president and matron residence on the second floor; a foyer, offices, youth center, clothing rental, cafeteria, laundry room, and distribution center on the first floor; and a baptistry and mechanical area in the basement.

On Sunday, July 17, 1949, Elder Matthew Cowley made the first prophecy regarding the Tokyo Japan Temple at the dedicatory services for the old Tokyo mission home—the site where the temple now stands. Elder Harrison Ted Price, a missionary serving in the Northern Far East Mission, recorded in his journal: "In this prayer, he told of countless blessings from the Lord that have been enjoyed here to date, and went on to prophesy—'there will someday be many church buildings—and even TEMPLES built in the land.'"1

On August 9, 1975, President Spencer W. Kimball announced the building of a temple in Tokyo at an area conference held in the Nappon Budokan Arena in Tokyo. Before the prophet and his translator could finish the announcement, the congregation broke into spontaneous applause. They lifted their hands high in support of the proposal and wiped away tears of gratitude.2

After President Kimball announced that the temple would be built on the former mission home property, Elder Gordon B. Hinckley and others still considered other locations because the architect and contractors had hoped to build on a larger lot. No better property could be found, but for some inexplicable reasons, the Church was able to acquire land on either side of the mission home. The Nomura Investment Company offered its property to the Church for 2.6 million dollars, even though the company had already been offered more than 3 million dollars by another buyer. The additional room allowed Church architect, Emil B. Fetzer, to design a more beautiful and functional building including the addition of annexes for temple worker apartments and patron accommodations.3

Mission President Harrison T. Price, who was present as a missionary for Elder Cowley's dedication of the mission home and prophecy of the temple in 1949, was called to supervise demolition of mission headquarters to make way for the temple.4 One of the contractors was suprised to learn the building project was a temple. He recognized that the Buddhist and Shinto religions built shrines and temples and that Christian churches built meetinghouses and cathedrals, but he had never heard of a Christian church building a temple. He was told the temple would be "a sacred building, a holy house, where the glorious work of salvation for the living and the dead would be carried out, where baptisms for the dead and other ordinances would be performed to bring about the joining of wife to husband, children to parents, for the living as well as the dead, and where families would be sealed together for time and for all eternity."5

An open house was held for the Tokyo Japan Temple from September 15 through October 18, 1980. A media day was held two days earlier on September 13 when ribbons were cut and about 650 businessmen, politicians, university professors, ambassadors, and media reporters toured the interior. At the conclusion of the open house, a total of 48,000 visitors had walked through the newly constructed temple.6 Out of respect for the temple, some attended in their religious robes.

President Spencer W. Kimball dedicated the Tokyo Japan Temple over three days: October 27–29, 1980. In his dedicatory prayer, he said, "Bless, we pray Thee, the presidency of this temple and the matron and all the officiators herein. Endow them with wisdom and with the gift of discernment. Help them to create a holy atmosphere in this place so that all ordinances may be performed with love and a sweet, spiritual tone that will cause the members to greatly desire to be here, and to return again and again."

Some years after the temple was dedicated, the Church was able to acquire another adjoining lot where a multipurpose building was constructed to house apartments for temple missionaries and the president and companion of the Japan Missionary Training Center, meeting facilities for a Tokyo ward, dorm rooms and classrooms for the Missionary Training Center, and dorm rooms for out-of-town patrons. A small parking lot was also added for Church employees and Sunday services. The annex building was completed in July 1986. 7

On December 10, 2004, a gilded statue of the angel Moroni statue was added to the previously unornamented spire of the Tokyo Japan Temple. Hundreds of onlookers applauded the event. Although rain was forecasted for the 10th, the day was beautiful and clear. The scaffolding was taken down the following week, revealing a more beautiful and magnificent temple than before.8 On July 23, 2005, a magnitude 5.9 earthquake struck Tokyo causing the trumpet in the hand of Moroni to be knocked to the ground. The temple sustained no major damage.

On September 29, 2017, the Tokyo Japan Temple closed for a nearly five-year renovation. In addition to mechanical and seismic upgrades, floor plan improvements were made, especially in the baptistry. The building was redecorated with new furniture and furnishings that reflect the Japanese style of Shibui. Light fixtures were inspired by traditional Shoji lanterns with glass that looks like rice paper. The vibrant carpets were inspired by traditional kimono patterns, including in the bridal room. The grounds were improved with new landscaping around the entire property.

A two-week open house was held prior to the rededication of the Tokyo Japan Temple from June 3 through June 18, 2022. A total of 19,000 people toured the interior including many people of influence in Japan from government, commerce, education, and religion.

President Henry B. Eyring, second counselor in the First Presidency, presided over the rededication of the Tokyo Japan Temple in three sessions on Sunday, July 3, 2022. He was joined by Elder Gary E. Stevenson of the Quorum of the Twelve Apostles who has strong ties to Japan. A rededicated temple in Tokyo "is a great thing for this nation," said President Eyring. "It is a great thing in the world to have a temple of God. I feel grateful just to be here."9

In his dedicatory prayer, President Eyring prayed for missionary work in Asia: "Now we pray for Thy blessings upon Thy people, on the faithful missionaries who invite Thy children to come unto the Savior and choose the only way to come unto Thee. With great faith, we implore Thee to guide the missionaries in Japan and throughout Asia to find those who are seeking the happiness available to them only through covenants with Thee, made through sacred priesthood ordinances."

The temple is located in one of the loveliest residential areas of Tokyo, across from the lush vegetation of historical Arisugawa Memorial Park. It is made with structural steel and reinforced concrete faced with 289 panels of precast stone, giving the appearance of light gray granite.

The landscape architects chose many indigenous plants for the landscape palette. These include Japanese maples, bamboo, and other important plant material in Japanese landscapes. Landscaping is now around the entire temple, whereas before it was very limited.

The temple has a waterfall and two Japanese-style shallow ponds as landscape features. These features are natural looking and provide wonderful “soft” noise and visual appeal to the plaza space.

The art glass windows include earth-toned colored glass borders with carved, frosted glass center panels for the main windows and simple frosted center panels for the side windows. Before the renovation, the temple only had art glass in the center main window while side windows were clear with added draperies. The art glass windows were designed by Shaun Harrison of RDP and fabricated by Holdman Studios of Lehi, Utah.

Patterns used in the art glass, carpets, and fabrics were all selected to replicate or be reminiscent of, traditional Japanese patterns seen in kimono fabric, shoji screens, and other historic Japanese art.

The general carpet is a nylon product manufactured in the US and installed by Japanese contractors. The bride’s room, celestial room, and sealing room carpets are all hand-tufted wool products that were fabricated in China and installed by Japanese contractors. The loose rugs in the lobby are both nylon and wool and fabricated in China. Both the bride’s room and entry rug designs are based on historic kimono fabric patterns.

Flooring materials consist of stone and ceramic tile, depending on the area of the temple. Due to some constraints of the existing structure, some of the areas have a stone and porcelain tile combination. In other locations, there is also stone mosaic tile used.

The font railings and glass were fabricated by Japanese subcontractors.

The basic design throughout most of the temple takes design ideas from the traditional Japanese lantern with glass that looks like rice paper. As the rooms progress in importance, they get more ornate and include crystals in the ordinance rooms. The decorative lighting was designed by Shaun Harrison of RDP. The fabrication and installation were by Yamagiwa of Japan, the same company that did the Sapporo Temple decorative lighting.

The ceilings and crown moldings were designed, fabricated, and installed by Japanese consultants and subcontractors. Most of the ceilings are simple painted gypsum board or stepped ceilings with complementary trim in stained wood or painted wood materials.

The millwork was fabricated in Japan by Japanese subcontractors.

The doors are wood with locally sourced hardware.

Six consoles in the corridors of the third and fourth floors were customized to include hand-painted doors based on historic Japanese screens. There are three different scenes: cherry blossom, chrysanthemum, and the pine tree.