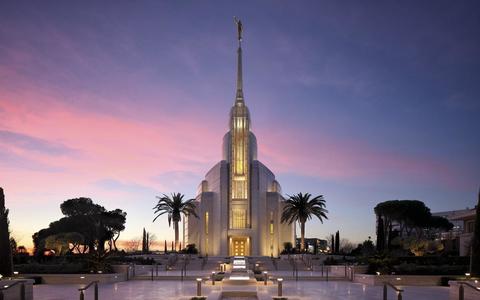 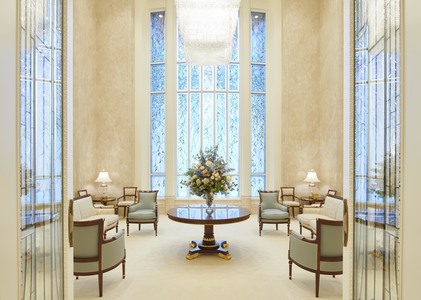 In a historic assembly of the entire First Presidency and the Quorum of the Twelve Apostles in the Eternal City, President Russell M. Nelson dedicated the much-anticipated Rome Italy Temple today, following the cornerstone ceremony. The day before, in another moment of Church history, President Nelson became the first president of the Church to meet with a sitting pope. "We had a most cordial, unforgettable experience," said President Nelson. Following the visit, the day ended with a youth devotional at the stake center located at the temple site. President Nelson and his wife, Wendy, were accompanied by President M. Russell Ballard who said: "I want to testify to you that God’s love for you…is real. You are His sons and His daughters. He loves you. He wants to bless you. The Lord has given you a beautiful temple." 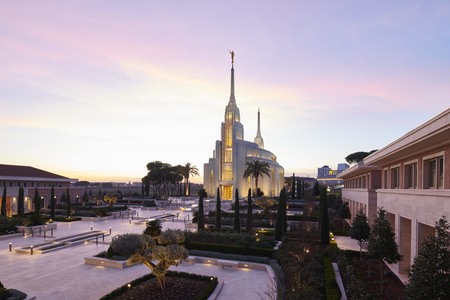 The entire First Presidency and Quorum of the Twelve Apostles will accompany President Russell M. Nelson for the dedication of the Rome Italy Temple to be held in seven sessions this Sunday, March 10 through Tuesday, March 12, 2019. It is believed to be the first time in Church history that all 15 apostles have gathered in one location outside of the United States. 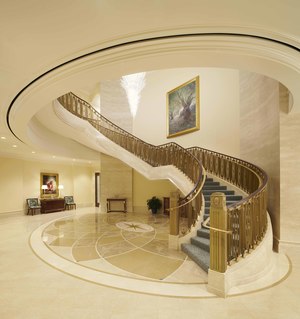 If you weren't able to make the trip to Rome to tour the newly completed Rome Italy Temple, you'll appreciate this virtual tour of the temple complex led by Elder David A. Bednar and Elder Ronald A. Rasband of the Quorum of the Twelve Apostles. Tours of the Rome Italy Temple officially began this week for the general public. After donning white booties, guests are guided to the stake center for a video presentation, followed by a walking tour of the temple. Exquisite Italian details are incorporated throughout the temple complex, creating an immediate connection for Italian visitors. 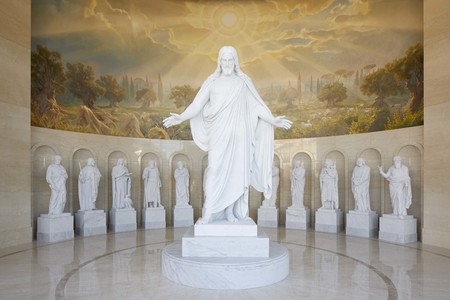 An invitation to tour the Rome Italy Temple has been issued from Church headquarters including an official video and accompanying photographs showcasing the interior. Tours of the temple begin Monday, January 28, and continue through Saturday, February 16, 2019. The temple will be dedicated in March. 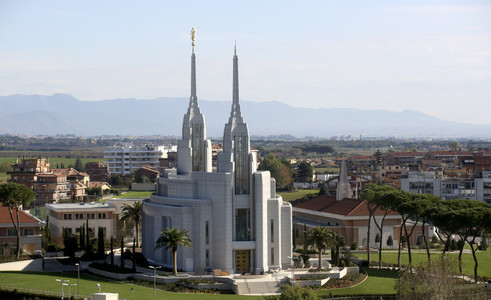 After more than eight years of construction, the breathtaking Rome Italy Temple will finally open to the public at the end of this month beginning Monday, January 28, and continuing through Saturday, February 16, 2019. Visitors will also have the opportunity to see the stunning reproductions of Thorvaldsen's Christus statue and twelve apostles housed in the visitors' center. 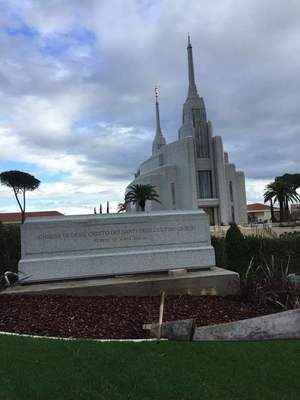 An official letter from the First Presidency has announced that the week-long dedication previously scheduled for the Rome Italy Temple has been shortened to three days: Sunday, March 10, 2019 through Tuesday, March 12, 2019. The open house and youth devotional dates remain the same. The temple will open for ordinance work on Tuesday, March 19, 2019. 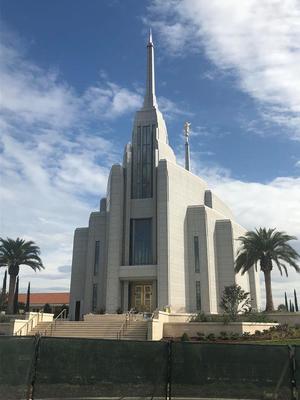 Are you interested in volunteering at the much-anticipated open house for the Rome Italy Temple? If so, please visit the official volunteer website for details and instructions. A massive mural was recently installed in the visitors' center on a curved wall above the marble reproductions of the original twelve apostles. 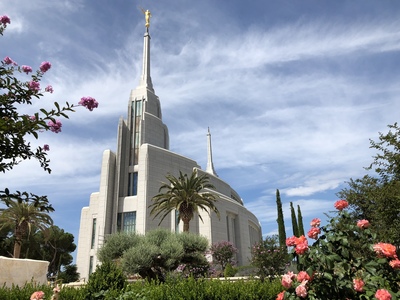 Free tickets are now available for the public open house of the Rome Italy Temple beginning January 28, 2019 and continuing through February 16, 2019. The dedication of the temple will be held during the week of March 10–17, 2019. 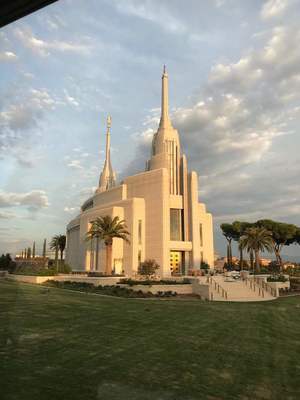 The temporary information center being operated at the Rome Italy Temple closes tomorrow as the construction site enters its final months of preparations for the public open house and dedication that will be held early next year. A permanent visitors' center will be part of the new temple complex. 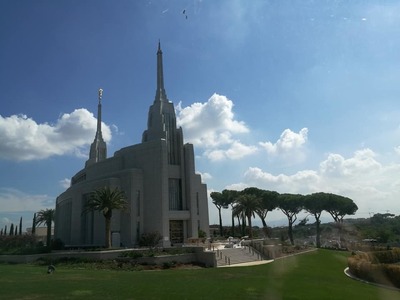 Want to Come to the Rome Italy Temple Dedication?

If you are interested in attending the dedication for the Rome Italy Temple, please complete this official survey provided by the Temple Department. The temple will be dedicated March 10–17, 2019.

With scaffolding removed from the north and south sides of the Rome Italy Temple, observers can catch a glimpse of the highly colorful art glass filling the window openings and new additions to the landscaping including rows of Italian cypress trees flanking either side of the building.

The grounds around the Rome Italy Temple are taking shape as crews lay irrigation lines for the garden areas and fence posts are dropped around the perimeter. Beautiful palm trees were planted several weeks ago at each corner of the temple, and art glass installation continues.

Construction of the Rome Italy Temple is making encouraging strides following some delays that were experienced earlier this year. Installation continues on 800 panes of art glass while palm trees and other plants are added to the grounds. Scaffolding is being removed from the east tower.

The office trailers at the Rome Italy Temple have been donated to local organizations as office space was relocated to the patron housing.

The Rome Italy Temple (videos) reached a much-anticipated milestone today with the placement of the gold-leafed angel Moroni statue atop the tallest spire. This event marks a significant development toward completion.

New missionary arrivals are welcomed to the Italy Rome Mission with a visit to the beautiful four-building Rome Italy Temple complex, which has been under construction for over six years. Art glass for the temple is expected to be shipped for installation in the spring.

Special Fast of Thanksgiving for the Rome Italy Temple

With construction proceeding steadily and stably at the Rome Italy Temple, members have been invited to participate in a special fast of thanksgiving this Sunday. During a July visit, President Uchtdorf said: "The temple will not be ready this year, but WE need to be ready for the temple this year."

President and Sister Uchtdorf were received as special guests at the Rome Italy Temple last Sunday. "It will be a magnificent and beautiful temple," he said.

Building for Eternity in the Eternal City

For the many Saints who are eager to see the completion of the Rome Italy Temple, building for eternity has felt like eternal building! And although many months of construction remain, when the temple is completed, it will be fit to stand through the eternities as the Lord's House in Italy.

A View of the Rome Italy Temple Site

Construction continues on the Rome Italy Temple, which began over five years ago. The framework for the two spires was attached in November and has been surrounded by scaffolding. The stake center and visitors' center can be seen on either side of the temple.

Getting a Closer Look at the Rome Italy Temple Site

A new series of photographs of the Rome Italy Temple, taken on New Year's Day, shows the temple site from a variety of perspectives and locations. In late December, Elder Dallin H. Oaks and his wife, Sister Kristen M. Oaks, toured the temple site as part of a visit to Italy. Elder and Sister Oaks spoke at a special fireside held in Rome on December 27.

The final section of framework for the eastern spire of the Rome Italy Temple has been installed. The spire will soon be faced with stone cladding.

New construction progress can now be seen at the Rome Italy Temple where the framework for the eastern spire has been installed. In the coming days, the framework will be clad with stone and topped by a gold-leafed figure of the angel Moroni. Several months of construction remain.

For most of the year, construction at the Rome Italy Temple has been limited and focused largely on replacing materials or redoing work. As of September, however, regular construction is moving forward. Due to a subcontractor change, scaffolding was removed and is now going back up.

Scaffolding has seemed like a permanent fixture at the Rome Italy Temple, which has surrounded the building for approximately three years. This week, the final scaffolds were taken down, changing the appearance of the exterior of the temple for the first time in 18 months. Heavy equipment can be seen on site, signaling an end to long construction delays and a revival of large-scale construction efforts, which are expected to continue well into next year.

In the coming weeks, construction activity is expected to resume at the Rome Italy Temple complex where the four buildings stand with nearly completed exteriors. Several new contractors, including Church employees, will be flown to Rome to guide the work to completion.

Members in Italy have been invited to participate in a special fast on January 25 for the completion of the Rome Italy Temple.
LOAD MORE NEWS

"As we touch the temple and love the temple, our lives will reflect our faith. As we go to the holy house, as we remember the covenants we make therein, we will be able to bear every trial and overcome each temptation."
—Thomas S. Monson