15th dedicated temple in operation; scheduled to close for renovation following the dedication of the Orem Utah Temple 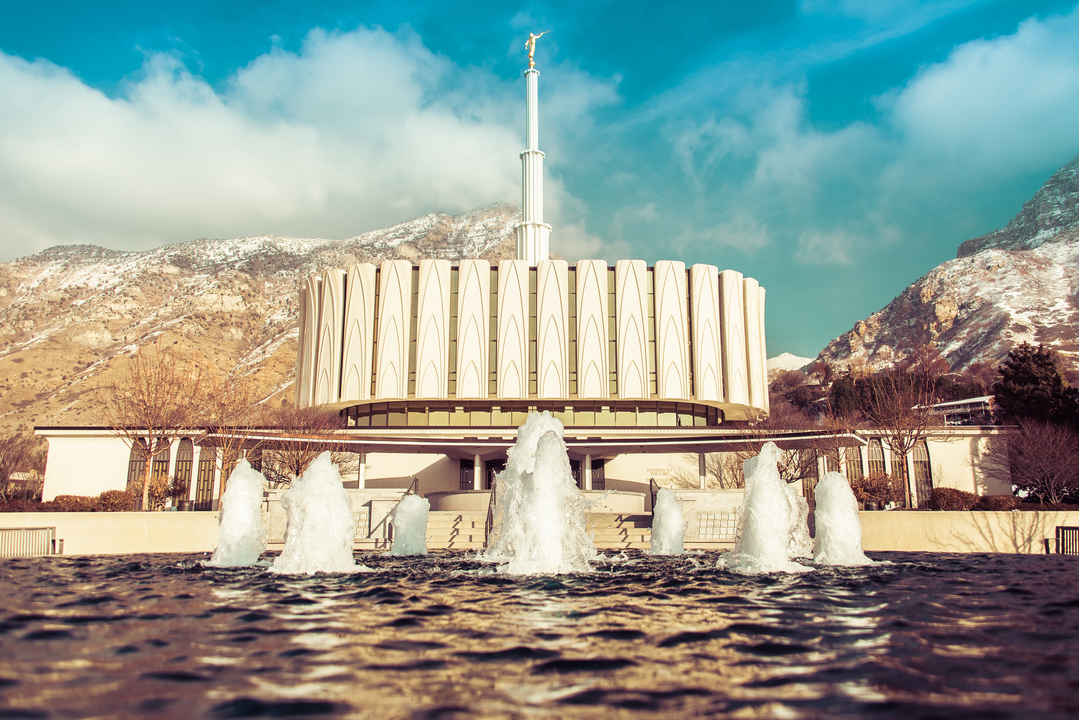 9 February 1972 by Joseph Fielding Smith (read by Harold B. Lee)

In his concluding remarks at the Sunday Afternoon Session of the October 2021 General Conference, President Russell M. Nelson announced that the Provo Utah Temple would be close for reconstruction following the dedication of the Orem Utah Temple.

Located on Provo's east bench near the mouth of magnificent Rock Canyon, the Provo Utah Temple claims a stunning backdrop of towering mountains. The extensive temple grounds are decorated with a cascading water feature and numerous flowers, shrubs, and trees. Across the street is the Missionary Training Center (MTC) where thousands of young missionaries reside year round preparing for missionary service around the world. The campus of Church-owned Brigham Young University (BYU) borders the temple to the southwest.

The Provo Utah Temple is one of only four temples with six instruction rooms. (The other three temples are the Ogden Utah Temple, the Jordan River Utah Temple, and the Washington D.C. Temple.)

The Provo Utah Temple and Provo City Center Temple were the second pair of temples to be built in the same city, following the Jordan River Utah Temple (1981) and Oquirrh Mountain Utah Temple (2009) in South Jordan, Utah.

The Provo Utah Temple was originally named the Provo Temple.

The announcement of the Provo Utah Temple and Ogden Utah Temple was prompted by a statistic computed in the mid-1960s that 52 percent of all ordinance work was performed in three temples: the Logan Utah Temple, the Manti Utah Temple, and the Salt Lake Temple.

The original design for the Provo Utah Temple included a gold-leafed statue of the angel Moroni atop a gold-colored spire. The statue was eventually eliminated from the design, though one was added over 31 years after its dedication as part of a renovation project in 2003 that also changed the spire color from gold to white.

President Joseph Fielding Smith presided at the dedication of the Provo Utah Temple, but at his request, the prayer he had written was offered by President Harold B. Lee, first counselor in the First Presidency.

The Provo Utah Temple was dedicated in just two sessions by seating attendees—in addition to the temple—in the Marriott Center, George Albert Smith Fieldhouse, Joseph Smith Building, Harris Fine Arts Center, and Knight-Mangum Hall (Language Training Mission) on the BYU campus. Over 70,000 attended in what was the largest temple dedication in history.

In the late 1970s, a feasibility study was prepared by the Provo Temple presidency for the establishment of a Provo Temple Visitors Center. The study included statistical compilations of responses to a survey sent to stake presidents within the temple district. However, no visitors' center was ever established.

"In the temple we face the sunlight of truth. The light of the temple, that understanding, shines upon us as does the light of the sun. And the shadows of sin and ignorance and error, of disappointment and failure, fall behind us. Nowhere quite equals the temple."
—Boyd K. Packer