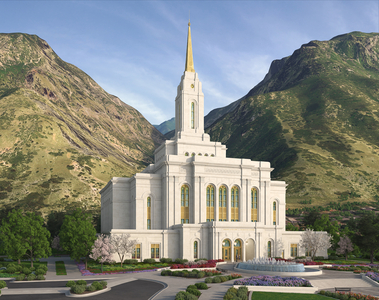 Church officials have given the public a glimpse of the planned design for the Provo Utah Temple, which will be reconstructed following the dedication of the Orem Utah Temple. The three-story edifice will stand at the same location as the existing building and feature striking gold accents including the spire. Just as it was constructed originally, the temple will not have an angel Moroni statue. A statue was added in 2003 as part of a renovation project that also turned the spire from gold to white. No specific date for the closure of the temple has been announced.

Ogden's "Sister Temple" in Provo Has No Plans For Makeover

Following the announcement that the Church would completely transform the exterior appearance of the Ogden Utah Temple, questions began to fly regarding its counterpart in Provo. Would it receive the same treatment? Church officials say no plans are on the table.