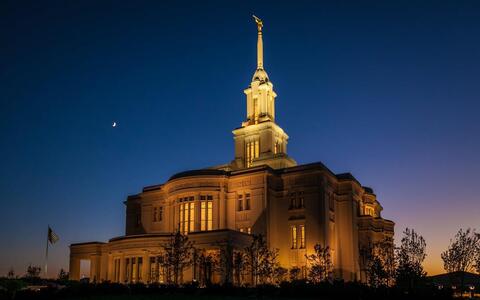 Watch the Temples Through Time video presentation created by Church headquarters to hear the perspectives of scholars, ministers, people of faith, and members of The Church of Jesus Christ of Latter-day Saints share thoughts about temples, old and modern, and how they connect people with heaven. 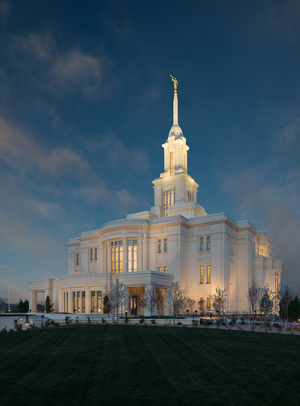 A letter issued today from the First Presidency to all Church members states: "After careful and prayerful consideration, and with a desire to be responsible global citizens, we have decided to suspend all temple activity Churchwide at the end of the day on March 25, 2020. This is a temporary adjustment, and we look forward to the day when the temples will reopen. Please be assured of our sincere love and appreciation for your devotion and faith."

President Henry B. Eyring, First Counselor in the First Presidency, dedicated the Payson Utah Temple today. It is the fifteenth in Utah and the third in Utah County. A fourth Utah County temple will soon be dedicated in Provo.

Over 475,000 people toured the Payson Utah Temple during its month-long open house, which concluded on Saturday. The temple is now being prepared for dedication in three sessions on Sunday, June 7, 2015.

Beginning today and continuing through Saturday, May 23, hundreds of thousands of visitors will descend upon Payson, Utah to tour the interior of the new temple. Those unable to tour the temple in person may enjoy this virtual tour of the interior.

VIP and media tours have begun at the new Payson Utah Temple—the third in Utah County. Tours for the general public begin on Friday and continue for four weeks. A preview of the interior can be found at the Newsroom site.

Free reservations for the Payson Utah Temple open house are now available through the online reservation system. The month-long open house beings on Friday, April 24, and ends on May 23.

A road grader spreads gravel over the auxiliary parking lot being created for the large number of visitors expected at the Payson temple open house. Free tickets for the event will be issued through an online reservation system beginning Monday.

While construction trailers are leaving the grounds of the Payson Utah Temple, delivery trucks are arriving, carrying a variety of furniture and furnishings for the beautiful new temple. The public open house begins in just 7 weeks.

Free reservations for the Payson Utah Temple open house will be accepted beginning Monday, April 13, at 10:00 a.m. Chain-link fencing was recently removed from the front of the temple, and winter coverings were lifted off the flower beds.

With the open house fast approaching, work is wrapping up on the Payson Utah Temple.

Janene Baadsgaard, the sister writing the official history of the Payson Utah Temple is seeking your experiences to include in the book.

It was a white Christmas at the Payson Utah Temple as Winter Storm Eris delivered plenty of snow to communities throughout the Rockies. The striking new edifice is scheduled to open to the public for a month-long open house in the spring, beginning Friday, April 24.

The First Presidency has announced that a free public open house for the Payson Utah Temple will be held from Friday, April 24, through Saturday, May 23, 2015, excluding Sundays. The temple will be dedicated in three sessions on Sunday, June 7.

Exquisitely illuminated in the crisp December air, the Payson Utah Temple glowed white and bright last night. Utah's fifteenth temple will serve the growing LDS population from Spanish Fork on the the north to Delta on the south.

Construction workers have installed an entrance gate at the Payson Utah Temple, helping to complete the decorative fencing that surrounds the temple grounds. The temple stands on a 10-acre parcel near a church building in the Mount Nebo stake.

Planting Bulbs and Flowers at the Payson Utah Temple

The grounds of the Payson Utah Temple are being further beautified with the planting of tulip bulbs and pansies around the monument sign. Work on the extensive interior is anticipated to continue through the winter months.

The protective coverings wrapped around the exterior doors of the Payson Utah Temple are coming down, revealing the beautiful dark-stained, wood-grained doors inlaid with art glass that matches the temple's vine motif.

Keeping an Eye from the Sky on the Payson Utah Temple

As the Payson Utah Temple enters its final months of construction, a striking aerial photograph has captured the beauty of the majestic building and its symmetrical grounds. The new temple enjoys a peaceful setting surrounded by farmland and quaint Payson residences.

Payson residents and passers-by were treated with a beautiful spectacle last night as the exterior lighting system for the Payson Utah Temple was turned on for testing. Utah County's third temple is expected to be dedicated next year.

Large deliveries of trees and plants are arriving at the Payson Utah Temple site, as landscaping efforts continue in the garden areas nearest the edifice. Finish work advances on the interior, which will feature beautiful natural stone accents.

Quick work is being made of delivery of a dark topsoil to the flowerbed surfaces at the Payson Utah Temple using a conveyer belt system. Work started at the southeast corner of the building and will continue around the remainder of the grounds.

At the beginning of this week, the first water test of the fountain on the east side of the Payson Utah Temple was successfully initiated. The site plan shows water features on both the east (front entrance) and west sides of the building.

Numerous boxes sit outside the Payson Utah Temple holding beautiful natural stone, like marble, for the interior trim and accents being installed inside the building. On the outside, work continues on the fence, sprinkler system, and landscaping.

Construction workers at the Payson Utah Temple continue to make progress on the installation of a long decorative fence that will surround the perimeter of the property. Sprinkler lines are visible around the grounds where vegetation is planned.

At the Payson Utah Temple, the chain-link construction fence on the southwest side of the property has been removed, as a permanent wrought-iron fence is installed. Several months of work remain to complete the temple interior.

Only a few pieces of art glass remain to be installed in the spire of the Payson Utah Temple, which is no longer surrounded by scaffolding. The glass will be installed once workers no longer require an opening for passing in materials.

More posts and balusters of the decorative fence have been installed around the Payson Utah Temple site. Work on window installation continues, which has taken longer than expected. The temple is anticipated to open next year.

The grounds of the Payson Utah Temple are filling with life as trees and shrubs are added to the parking lot islands. Black lamp posts have also been installed, giving patrons both shade from the heat and light during the night.

The southeast corner of the Payson Utah Temple site has been filled with hundreds of buckets holding plants and flowers that will soon be planted into the garden areas of the temple grounds. Work continues on installing art glass windows.
LOAD MORE NEWS