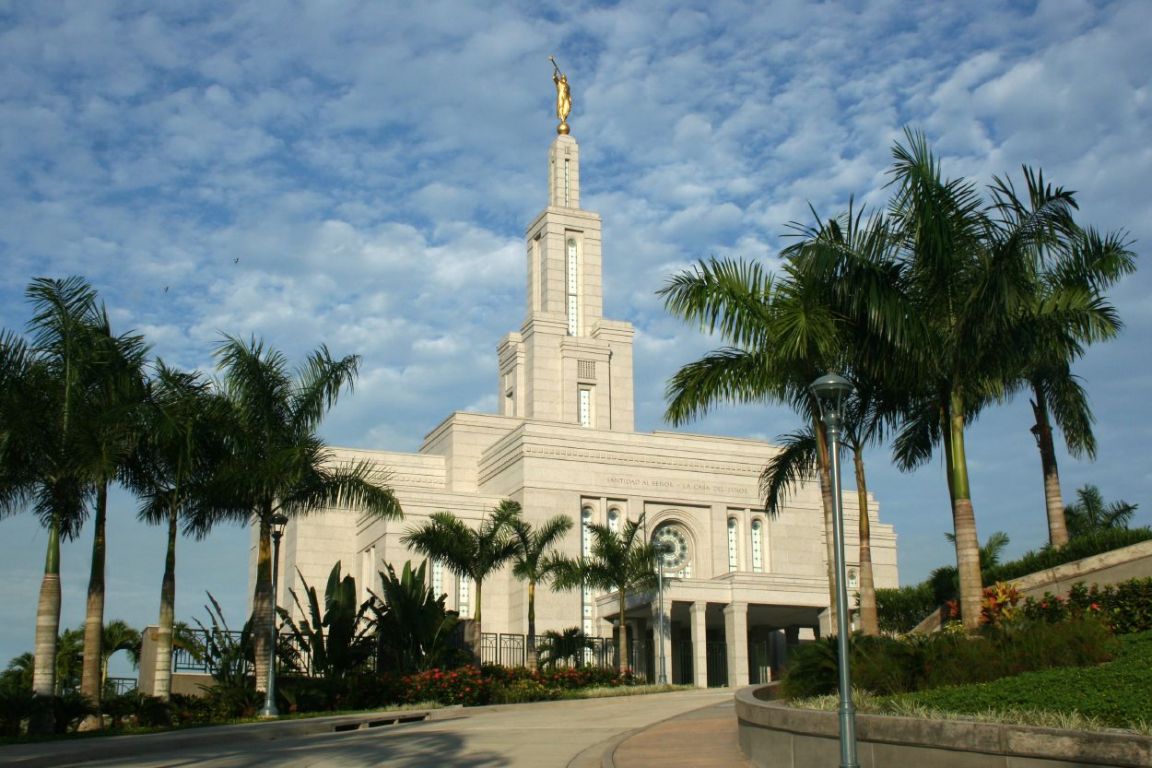 The lush hillside location of the Panama City Panama Temple overlooks the famed Panama Canal, traveled by ships and vessels from around the world. The temple stands adjacent to the Cárdenas meetinghouse, which was extensively remodeled during the temple's construction. A large facility at the rear of the property provides housing for the temple presidency, temple missionaries, and temple patrons. The beautiful landscaping is punctuated with numerous palm trees, colorful foliage, and a serene water feature.

The Panama City Panama Temple was the third temple built in Central America, following the Guatemala City Guatemala Temple (1984) and the San José Costa Rica Temple (2000), and the first built in Panama.

The first congregation of The Church of Jesus Christ of Latter-day Saints in Panama was organized in 1941. The Panama City Panama Temple was dedicated 67 years later.

The public open house of the Panama City Panama Temple saw nearly 33,000 visitors tour the interior of the sacred edifice before its dedication.

President Thomas S. Monson's trip to dedicate the Panama City Panama Temple was his first time in the country of Panama.

During a visit to Panama in December 2000, President Gordon B. Hinckley prepared the Saints for a temple announcement at a member meeting. He told the congregation of 5,000 that the Church would find a way build a temple there if they faithfully paid their tithing and kept the other commandments. He recognized that the cost of the temple would far exceed their tithing contributions but promised that the Lord would bless them through the exercise of their faith to obey that law. Less than two years later, the official announcement was made.1

Construction of the temple began on October 30, 2005, when groundbreaking services were held. Elder Spencer V. Jones of the Seventy presided, promising blessings to families who study the scriptures, hold family home evening, and pray together consistently. Although Hurricane Beta threatened the Panamanian shores the day before, it headed north the day of the groundbreaking, leaving blue skies for the ceremony.2

On Friday, May 4, 2007, a figure of the angel Moroni was installed atop the single central spire of the temple. Members reported that the Moroni setting was a glorious occasion for all the Saints of Panama. They thrill in having this symbol of the restoration in their own country.3

Prior to its dedication, the temple opened to the public for two weeks, gaining the positive attention of several media agencies. Nearly 33,000 toured the building who likewise enthusiastically received the temple as a beloved symbol of Panama. Comments from visitors seemed to center around the special feelings they felt: "I think this is the most special place I have ever visited. I felt the Creator's presence." "The peace felt inside the temple is incredible. In every room, you feel close to the Lord." "Being inside the temple is like being in heaven. It's special."4

On Saturday evening, August 9, 2008, a Cultural Celebration was held the evening before the dedication of Panama's "temple in the jungle"—a reference to its rainforest location. A thousand Panamanian youth filled the floor of the Figali Convention Center in Amador thrilled to perform for an audience of thousands of fellow Saints including Church President Thomas S. Monson and his second counselor, Dieter F. Uchtdorf. "I've long wanted to come to Panama," President Monson said, noting his arrival that day was his first steps on Panamanian soil. A rich and colorful variety of cultural dances and local folklore culminated in a message of leaving cultural differences behind to unite as one—a fitting honor to the work performed within the temple walls.5

Dedication day commenced with the traditional cornerstone ceremony, which proceeded to a backdrop of storming rains. The choir remained unfazed by the roar of thunder—its beautiful melodies ringing through the humid air. Delighted children from the congregation joined President Monson at his bidding to seal the cornerstone of the temple. The dedication brought delight to children and adults alike. Panama City resident Ernesto Tejada said, the temple "has given me more optimism—it's given me more hope."6

The day following the dedication of the temple, President Monson and other Church leaders met with Panamanian President Martin Torrijos and his wife, Vivian Fernandez de Torrijos. President Torrijos extended his gratitude for the humanitarian efforts offered by the Church in Panama, including numerous projects for children such as wheelchair distribution, vaccine initiatives, and literacy programs. President Monson presented a sculpture illustrating a child's first steps to the Torrijos family, which they gratefully accepted. President Torrijos asked questions regarding the construction and dedication of the temple. President Uchtdorf explained the great strength and blessings that the temple would bring to all the residents of Panama.7