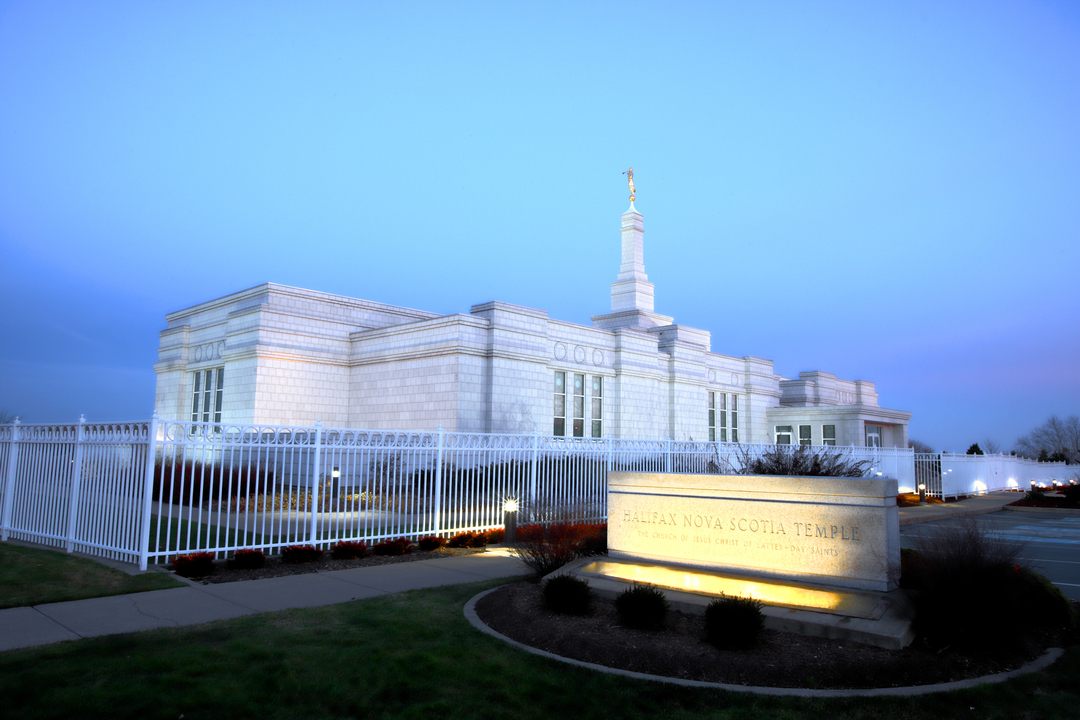 A mechanical problem with the plane to be used by President Gordon B. Hinckley to travel to the Halifax Nova Scotia Temple dedication resulted in a historic first: the dedication of two temples on the same day. The Regina Saskatchewan Temple, scheduled to be dedicated by President Hinckley the next day, was instead dedicated by Elder Boyd K. Packer, acting president of the Quorum of the Twelve Apostles, while President Hinckley presided over the postponed dedicatory sessions for the Halifax temple. Richard Moses, second counselor in the Dartmouth Nova Scotia Stake presidency and chairman of the local temple committee, noted, "When the dedication was postponed, members showed no irritation, but inquired what they could do, like opening their homes to help offset the expense of those who would need to stay an extra night to attend the dedication." He added, "It is impossible - there are not words - to adequately express our gratitude for this temple. No longer do we just look at a picture of a temple. Now, when my daughters look out their bedroom window, they see the softly lighted figure of the Angel Moroni standing as a beacon over the area."

To attend the dedication, members in the Bay Roberts, Grand Falls and Corner Brook branches drove six to eight hours to a sea port where they ferried to Nova Scotia during the night, then drove four more hours to the temple. Members from Maine drove eight hours to attend. Members in New Brunswick and on Prince Edward Island also drove many hours. "These are faithful people who don't consider attending the temple to be a sacrifice," President Moses said.

The influence of the temple reached deep into the hearts of many non-members, continued Pres. Moses, noting the concern expressed by a reporter of the province's largest newspaper. "After completing a tour during the open house, and obviously touched by what he was feeling, the reporter commented that there was no way he could write what he felt in the small space he would be given for the article." On another occasion, "A man dressed in leather and sporting many tattoos came to the open house. He was quiet during the tour and sat by himself in the celestial room. Soon, tears were flowing." A member brought his non-member mother to the open house. Sitting in the celestial room she said, "I've never felt closer to God."

During construction, "we found the counsel of Elder Jay E. Jensen of the Seventy to be true: the Spirit is in the details," said President Moses, noting how the members found joy in making the temple as perfect as possible. When several flecks of grouting were found on the bottom of the baptismal font after last-minute tile work done the day before the dedication, members were willing to drain, then re-fill the font."

President Moses recounted an experience one evening in Charlottetown, Prince Edward Island, that demonstrates the love of the members for the temple. "We were taking a tour through the temple district to give a report on the progress of the temple and show them a sample of the granite stone. At one point, I asked for volunteers to crochet altar cloths. A blind sister sitting on the front row quickly volunteered. 'I'd like to do this,' she said, and rather forthrightly, requested a pattern. A hush fell over the others as they considered the sacrifice she was making. Then they quickly volunteered."1