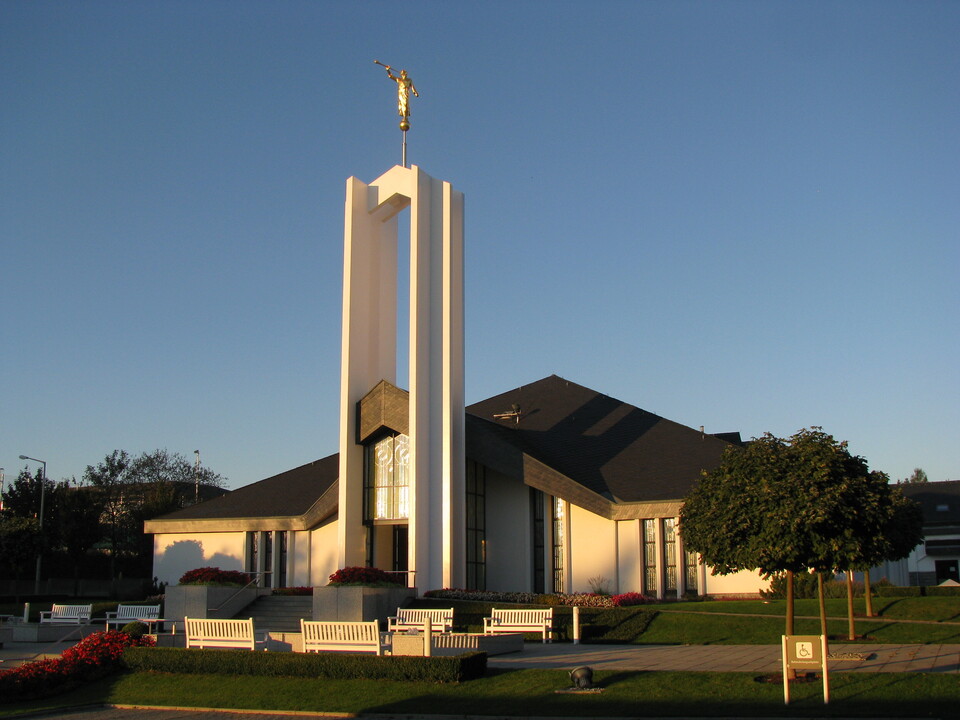 The Freiberg Germany Temple stands in the northwest section of beautiful and historic Freiberg. Citizens of all faiths feel an owernship and pride in the building, which they refer to as "our" temple. Distribution Services and housing for the temple president, missionaries, and patrons are located west of the temple while a meetinghouse stands to the north. The attractive grounds are lovingly maintained and open to the public.

At 7,840 square feet, the Freiberg Germany Temple was the smallest temple the Church had ever constructed.

Following diligent efforts by the Church to obtain permission for its faithful couples to attend the Bern Switzerland Temple, the government asked if it might consider building a temple in East Germany. The Church gratefully accepted the invitation and built the Freiberg Germany Temple.

Though just 40,000 Germans called the city of Freiberg home, crowds of 89,871 attended the two-week open house of the Freiberg Germany Temple—some waiting up to three hours in the rain for a chance to get inside.

In 1990, five years after the dedication of the Freiberg Germany Temple, the German Democratic Republic (East Germany) was reunited with the Federal Republic of Germany (West Germany).

An angel Moroni statue was added to the Freiberg Germany Temple on December 20, 2001, sixteen and a half years after its dedication as part of a major renovation and expansion project.

On September 7, 2002, President Gordon B. Hinckley presided at the rededication of the Freiberg Germany Temple, which he had originally dedicated over 17 years earlier. In the months that preceded the rededication, the temple was closed for extensive renovation and expansion that raised the quality of construction and decor to higher standards. Additional square footage extending to the east approximately doubled the size of the temple. New amenities included installation of twelve oxen to support the baptismal font, a non-patrons waiting room, a matron/brides room, and an office for the temple president. On December 20, 2001, the previously statueless spire was topped by a gold-leafed statue of angel Moroni.1

President Dieter F. Uchtdorf, second counselor in the First Presidency, returned to his boyhood country of Germany to rededicate the Freiberg Germany Temple on September 4, 2016. The temple had closed on February 9, 2015, for an extensive remodeling and expansion project that added a second ordinance room and created a larger Celestial Room with a raised ceiling. The evening before the rededication President Uchtdorf and his wife Harriet enthusiastically cheered at the youth cultural celebration that brought together 400 young men and women from eastern Germany, the Czech Republic, Slovakia, Hungary and Poland.2

"Into this house, when it is completed, we expect to enter to enjoy the blessings of the priesthood, and receive our washings, our anointings, our endowments, and our sealings; and the brethren will be sealed to brethren to connect the links and make perfect the chain from ourselves to Father Adam."
—Brigham Young