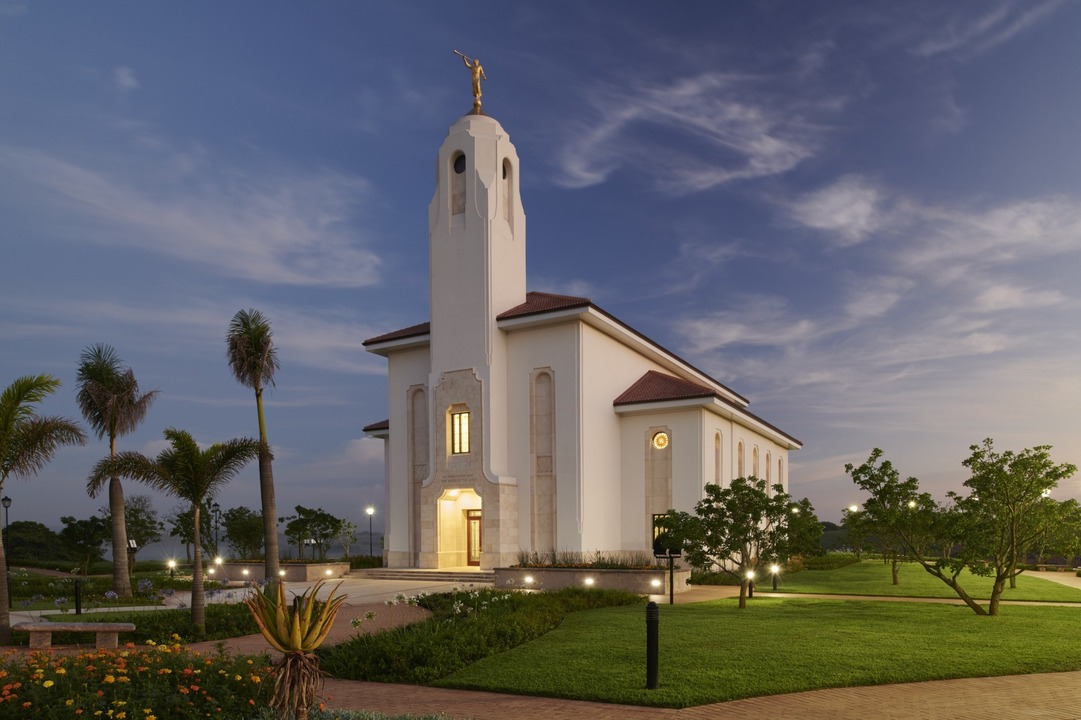 The Durban South Africa Temple is located north of the Umhlanga city center in the Izinga development. The temple is situated atop a beautiful grassy knoll near the ocean and a highway with unobstructed views to the sugar cane fields for which the area is known. In the other direction, the temple is surrounded by a residential neighborhood along the rolling coastal hills. The homes are characterized by earthy colors, red clay tile roofs, and wood and stone accents. The temple complements the design characteristics of the neighborhood.

President Thomas S. Monson announced the construction of a temple in Durban, South Africa, in the opening session of the 181st Semiannual General Conference on October 1, 2011.1

The groundbreaking ceremony for the Durban South Africa Temple was held on Saturday, April 9, 2016. Elder Carl B. Cook of the Seventy and president of the Africa Southeast Area presided, joined by other Church leaders, dignitaries, and community leaders. "Today the ceremonial shovels will turn the soil, and the construction of the temple will begin," said Elder Cook. "We can likewise begin building. We can build our personal lives in preparation for the temple. Today we can increase our faith, we can increase our obedience to God, and serve Him more fully."2

An eleven-day open house was held for the Durban South Africa Temple from January 22 through February 1, 2020, where guests were invited to tour the interior of the building and to feel of its sacred purpose.

For ten days prior to the dedication of the Durban South Africa Temple, Elder Ronald A. Rasband and his wife Melanie interacted with members, missionaries, youth groups, and friends including two pairs of kings and queens of Lesotho and the Zulu nation. On the day of dedication, he said, "And even though I’ve been with two kings, today I had the strong impression that we were here to worship and honor the King of kings." He declared the event "truly the benediction to our trip."3

The Durban South Africa Temple was dedicated in three dedicatory sessions, presided by Elder Ronald A. Rasband of the Quorum of the Twelve Apostles, on February 16, 2020. In his dedicatory prayer, he prayed for the countries of Africa saying, "We ask that the nations on this vast continent will be blessed by Thy merciful hand and that the scourges and plights of many will be replaced by honesty, brotherhood, and goodwill. May teachings of the gospel help heal, fortify, and strengthen each country."

The design of the Durban South Africa Temple was inspired by the buildings of downtown Durban. The corners of the building and tower employ simple and elegant detailing, while fluted stone panels accent the window openings. In the center of the fluting, simple geometric carvings highlight the African roots of the region. Similar to the houses in the surrounding neighborhood, the temple has a pitched red clay tile roof.

The indigenous landscaping brings color and life to the temple grounds. The entire site is 14.49 acres. There are more than 800 trees on the grounds, including symbolic king palms and flowering trees, such as the coral tree with its vibrant red flowers. Among the 2800 square meters of lawn are thousands of shrubs, vines, and flowers, including South African aloes that flower in winter and the striking strelitzia juncea, well known in the region. In addition, decorative motifs of the King Protea, the national flower of South Africa, have been used around the temple in the entry gates, stone benches, and art glass.

Consistent with the exterior of the building, the interior walls have recessive steps that offer shadow lines and detailing. Sapele mahogany has been used for the millwork, casework, and doors, with diamond shaped patterns that highlight the grain of the wood. Other carved motifs have been included throughout the temple to highlight altars, pew seating, and the entry desk.

Rugs have been custom-made and imported to South Africa. The rugs have a South African basket weaving design and are in gold, white, and cream colors. The Italian marble flooring contains tribal geometric patterns to celebrate the African theme throughout the temple.

There are more than 50 exquisite art pieces in the temple, including many scenes from the life and ministry of Jesus Christ and several pieces depicting African landscapes. The temple walls are adorned with scenes of sunsets, rivers, waterfalls, African wildlife, and indigenous flora and fauna.4