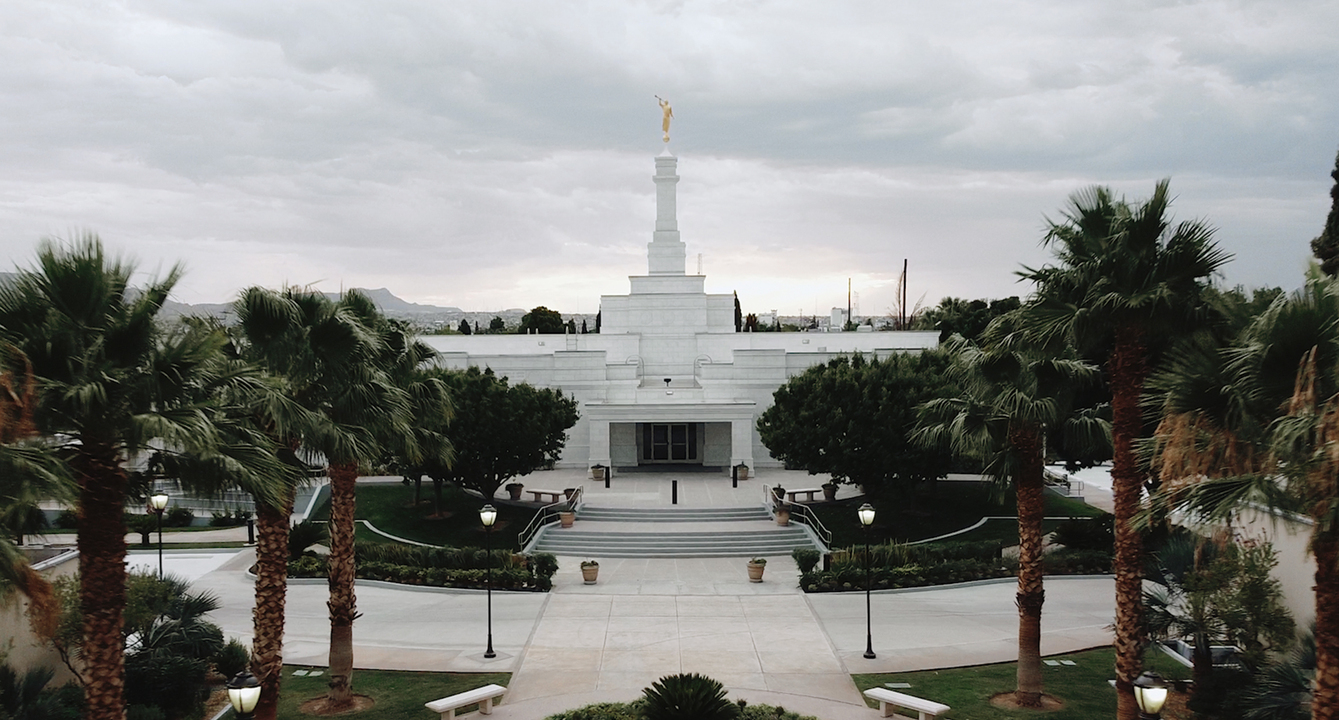 The Ciudad Juárez Mexico Temple is located in this "border city" (near El Paso, Texas) where industry and factories are found in abundance, and, hence, where many people and many church members are found, also. Within the immediate area are 12,000 members organized into five stakes.

Elder Eran A. Call of the Seventy and president of the Mexico North Area, presided and spoke at the groundbreaking ceremony of the Ciudad Juárez temple—the state's second. While speaking, Elder Call testified that temples are evidence of Church members' belief in life beyond the grave. He informed members that each child, youth and adult member in the temple district would receive a picture of the temple to remind them of the sacred nature of the building."We live in an historic period in the Church and in the world, when the president of the Church has announced that 30 temples will be built," said Elder Call. Whenever the Lord has permitted the fullness of the gospel to be present on the earth, temples have existed. They are sacred buildings dedicated to a sacred work. He pointed out that the decision to construct a temple in that location was one of inspiration. President Gordon B. Hinckley selected the site as one for the temple. "This was not my decision. The decision was made by him."

Elder Call informed members that instructions had come to move forward rapidly on construction and to prepare for the dedication. "I suppose," he said, "that within a year we will complete this beautiful edifice and begin to function as a House of the Lord." Because of this, "We want to be prepared and attend the temple, not just to have the temple as a monument," he said. This kind of preparation will bring the members more faith, purity, cleanliness, integrity, love and dedication to the callings they hold. "In this temple district, we have members on both sides of the border. This will bring a uniting and joining of members on both communities. This temple is a great thing for members in the United States as well."

"Never have I been so filled with joy as at this moment." Héctor Escobar Alcantar, patriarch of the El Paso Texas Stake, stated that in 1936, Ciudad Juárez received its first meetinghouse, and now, 63 years later, is receiving a temple. "The Lord has revealed to our beloved prophet, President Gordon B. Hinckley, that a temple should be built in this part of His vineyard. We, the saints in this part of the vineyard, accept the responsibility to be worthy of this high position and to strengthen the Church in this place."1

"And ye are to be taught from on high. Sanctify yourselves and ye shall be endowed with power, that ye may give even as I have spoken."
—Doctrine & Covenants 43:16