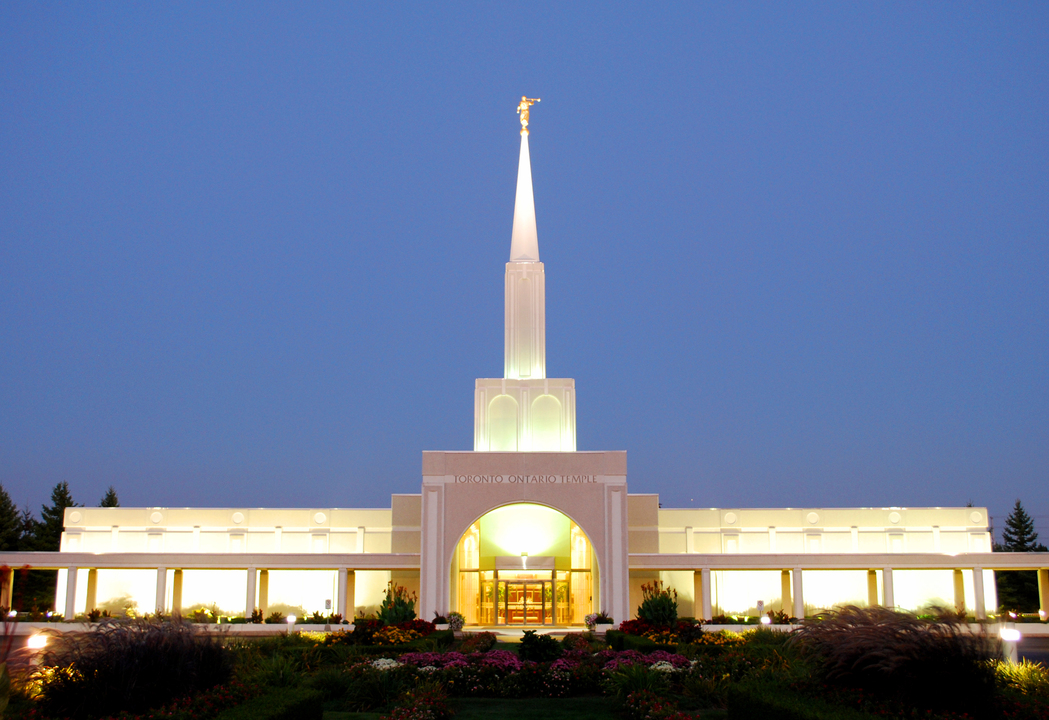 Standing in a beautiful residential neighborhood in Brampton, a Toronto suburb about 20 miles west of downtown, the Toronto Ontario Temple is a sublime structure with a 105-foot spire rising elegantly from its rooftop. The temple is oriented east, facing the intersection of Bramalea Road and Bovaird Drive. The Brampton Ontario Stake Center shares the exquisitely landscaped temple grounds, which are open for public enjoyment.

The Toronto Ontario Temple was the second temple built in Canada, following the Cardston Alberta Temple (1923), and the first built in Ontario.

The floor plan and design of the Toronto Ontario Temple was based on plans created for the Denver Colorado Temple.

Inscriptions on the exterior of the Toronto Ontario Temple are in both English and French—the official languages of Canada.

The site location for the Toronto Ontario Temple was announced on June 22, 1986, by President Thomas S. Monson, second counselor in the First Presidency, during the organization of a new stake in Ontario—the 1,600th stake of the Church. President Monson was president of the Canada Mission when the first stake in Ontario was created on August 14, 1960.

Ground was broken for the Toronto Ontario Temple on October 17, 1987, by President Thomas S. Monson, who was assisted by Elder M. Russell Ballard of the Quorum of the Twelve and Elder John K. Carmack of the First Quorum of the Seventy.

Construction of the Toronto Ontario Temple was completed on schedule despite a six-week labor strike that idled construction workers just nine weeks before the open house. In consideration of the open house schedule, union leaders agreed to allow a few Church members to do finishing work in the temple as unpaid volunteers.

During the two-week open house of the Toronto Ontario Temple, 2,600 Church members volunteered in whatever capacity was needed. From ushering to cleaning, they donated more than 64,000 hours.

A total of 61,285 visitors toured the Toronto Ontario Temple during its public open house. It was estimated that 30 to 40 percent were members of other faiths. Of those, 6,044 requested to receive more information about the Church.

The Toronto Ontario Temple was dedicated August 25–27, 1990, in 11 sessions. The services were translated in French, Spanish, Portuguese, Mandarin, Cantonese, and Korean due to the cultural diversity of the new temple district, which covered eastern Canada and the northeastern United States.

Ten years after the dedication of the Toronto Ontario Temple, President Monson returned on August 19, 2000, to commemorate the 10th anniversary of the temple and the 40th anniversary of the Toronto Canada Stake by dedicating a historical monument, commemorating the contributions of early missionaries and members who served and lived in Upper Canada including John Taylor, third president of The Church of Jesus Christ of Latter-day Saints.