Preparing for public open house beginning 25 March 2023; scheduled to be dedicated on 7 May 2023 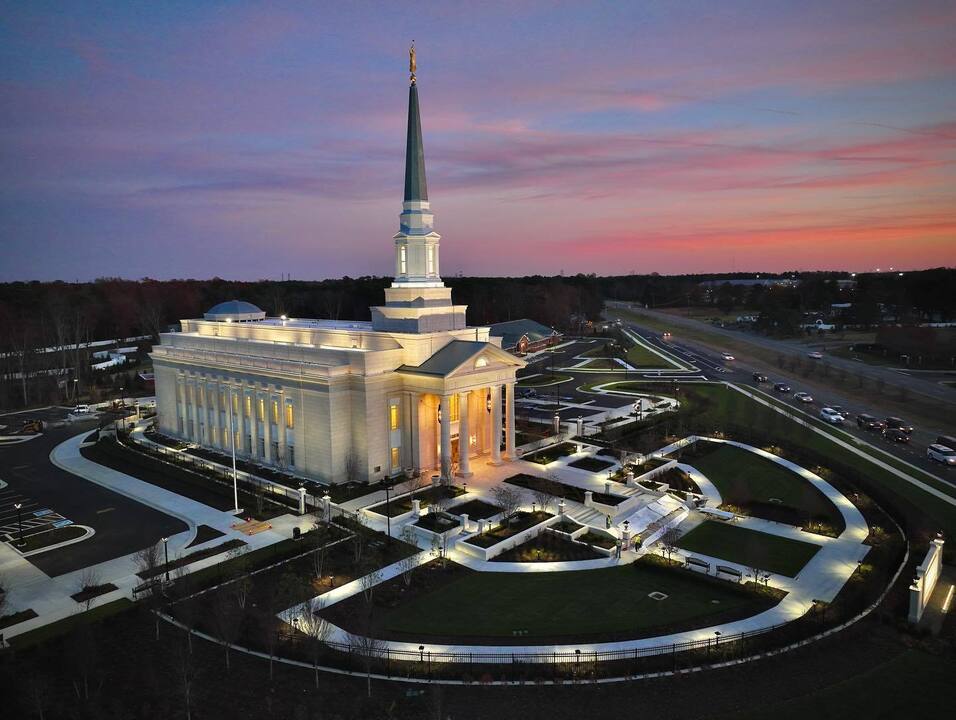 The First Presidency has announced the open house and dedication dates for the Richmond Virginia Temple. The open house will begin with a media day held on Monday, March 20, followed by tours for invited guests from March 21–24, 2023. The general public is invited to tour the temple from Saturday, March 25, through Saturday, April 15, 2023 with no tours held on Sundays or Saturday, April 1 (during general conference). The temple will be dedicated on Sunday, May 7, 2023 with Elder Jeffrey R. Holland of the Quorum of the Twelve Apostles presiding. The dedicatory sessions will be broadcast to all units in the temple district at 9:00 a.m., 12:00 noon, and 3:00 p.m.1

A very small but sacred service was held on Saturday, April 11, 2020, at 9:00 a.m. to dedicate the Richmond Virginia Temple site and to formally break ground on the project. Elder Randall K. Bennett, president of the North America Northeast Area, offered the site dedicatory prayer. He was accompanied by his wife, Shelley; newly called Area Seventy, Elder J. Matthew Scott; and Elder Scott's wife, Allyson. To comply with guidelines issued in response to COVID-19, the service was scaled down to a handful of leaders and was not broadcast to stake centers in the temple district as originally intended.

On November 20, 2019, the Henrico County Planning Commission approved the plan of development and the lighting plan for the Richmond Virginia Temple. Church representatives are currently obtaining building permits.

On August 28, 2019, an open house was held for Church members, neighbors, and journalists where eight interior and exterior renderings of the Richmond Virginia Temple were on displayed. A site plan shows the orientation of the temple, an adjoining meetinghouse, and a maintenance building.

On August 28, 2019, the official rendering of the Richmond Virginia Temple and renderings of the interior were released to the public in conjunction with an open house held for Church members, neighbors, and journalists.

Preliminary plans for the Richmond Virginia Temple, submitted to Henrico County on March 22, 2019, proposed a two-story, 36,200-square-foot temple with a large steeple capped with an angel Moroni statue, an adjoining 16,200-square-foot meetinghouse, a maintenance building, extensive landscaping, and a total of 240 parking spaces. An existing two-story home at 4151 Mountain Road will remain as a residence for the temple president and matron.2

The Richmond Virginia Temple will be constructed on an 11-acre wooded site at 10915 Staples Mill Road in Henrico County near Glen Allen.

The first temple to be constructed in the state of Virginia was announced by President Russell M. Nelson at the 188th Annual General Conference. "It is a dream come true," said Ruby Barley of the announcement. The 89-year-old and her family were among the first baptized in Spotsylvania County near Fredericksburg, Virginia. Jenni McCall, a Relief Society president in Stafford County was "ecstatic" about the announcement. "This will make such a difference to all of us," she said. Church members currently travel to the Washington D.C. Temple to participate in temple services, often enduring heavy stop-and-go traffic.3

Missionaries for the Church first arrived in Virginia in the early 1840s. By 1841, approximately 80 people had joined the Church in Virginia. There are now nearly 100,000 members across the state, which had previously been the state with the most members without a temple. Richmond is the capital of Virginia, and its central location will serve the members in Virginia well.4

The Richmond Virginia Temple will be the first temple built in Virginia.

"Verily I say unto you, that it is my will that a house should be built unto me in the land of Zion, like unto the pattern which I have given you. Yea, let it be built speedily, by the tithing of my people."
—Doctrine & Covenants 97:10–11