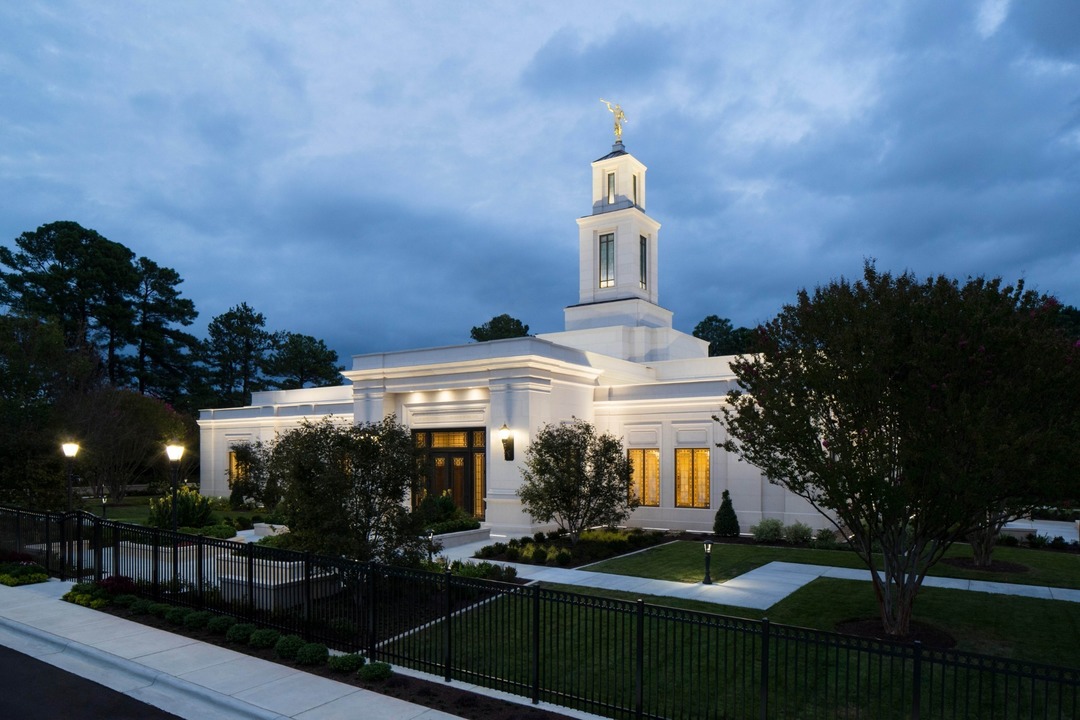 The Raleigh North Carolina Temple closed on January 7, 2018, for extensive renovation. During the remodel, crews upgraded the mechanical and electrical systems, made spaces ADA compliant, moved windows and doors to accommodate minor floor plan changes, enclosed the entrance canopy, and raised the height of the steeple by 10 feet.

The Raleigh North Carolina Temple's timely dedication was indeed a fitting offering to the Lord while the world observed His birth of nearly 2,000 years before. Moreover, the edifice was dedicated just five days before the 194th birthday anniversary of Joseph Smith, prophet of the Restoration. For North Carolina Latter-day Saints whose legacy extends back to the days when Jedediah M. Grant first preached the gospel there in 1838, the temple was a welcome gift, as well.

For example, in attendance was Blanche Keith, 83, Garner Ward, a granddaughter of Durham Hall Smith, who became the first convert in Raleigh's county on September 15, 1895. Cecil Reese, the first stake president in North Carolina in 1961, spoke during the second dedicatory session. Brother Reese, 78, a retired Du Pont chemist originally from Logan, Utah, whose employment brought him to North Carolina, marveled at what a blessing it is to have a temple in relatively close proximity. "I've sent people to the temple in either Arizona or Salt Lake who had sold everything they had except their cars to get the money to go," he recalled. "They'd come back, and they wouldn't have a dime left. They'll never tell you it isn't the smartest investment they ever made."

Pamela Beavers and Deborah Byler of the Fayetteville 3rd Ward, emotionally embraced each other after the first dedicatory session. "I will always remember this day and the feelings that I had," said Sister Beavers. "The spirit is just enormous in this little temple." Sister Byler said that in 1989, she was one of the first sister missionaries to serve at the Arizona Temple Visitors Center. "We had people come to the temple grounds so they could escape the outside world and feel the Spirit. And that same Spirit is here today."

School teacher Sarah Barnhill, a member of the Raleigh North Carolina Stake, was dismayed when she discovered that only a limited number of VIP guests could receive special invitations to the Raleigh North Carolina Temple open house and that her principal, who was also a minister, was not among them. So, Sister Barnhill obtained one of the 50,000 printed invitations available for distribution by members and personally extended the invitation. The small action sent ripples as her principal in turn took the invitation to his pulpit the next Sunday and urged the entire AME Rush Methodist congregation to see the newly completed temple for themselves. When she attended her principal's church services the Sunday after the open house as a gesture of courtesy, he brought her to the front of his congregation and thanked her for her personal invitation to experience such a beautiful building.

Apex Herald reporter David Leone prepared an eight-page Raleigh Temple commemorative insert for the Dec. 2 edition of the weekly newspaper. When 75 percent of that week's edition sold out two days after it hit the racks, the newspaper's circulation manager called to express regret that the paper had not fully appreciated the event the reporter pushed so hard to cover. He asked for the locations of other LDS temples being built in the South so he could alert other newspaper editors to what an asset an LDS temple can be.

Wake County Commissioner Yevonne Brannon was amazed at the images of the Savior during her tour of the temple. "The artwork was simply stunning," she exclaimed. "I felt myself drawn to each painting and found myself wanting to linger in front of every scene so I could contemplate the meaning of what was being portrayed. But how could I selfishly do that with so many people behind me?"

At the confirmation of Gary Stansbury, construction superintendent for the temple, Bishop Bruce Nay of the Apex Ward commented, "Most people come to the temple by way of the gospel; Gary came to the gospel by way of the temple." During construction, Brother Stansbury had begun investigating the Church and was baptized on September 29, 1999, after receiving the discussions by temple missionaries Elder Gaylen and Sister Alaire Johnson. "Looking back at the series of events that brought me here to North Carolina, I don't much believe in coincidence," Brother Stansbury reflected. "There are just too many things that fell into place, especially when I consider that the Johnsons were here, with whom I felt so at ease and who were so full of the Spirit."

Though he is from Kansas City, Missouri, right next to Independence, "somehow the Church eluded me for 44 years," he said. Originally assigned to supervise a large retail project in St. Louis, Brother Stansbury was reassigned to the LDS temple in North Carolina due to a delay in St. Louis. The temple project was to be a temporary assignment, so he began to look for other work early on. However, by the time he received a substantial offer from an Atlanta company, he told them to call back in December. The building was completed in a record six months. "I had to stay and build this temple," he said. "I needed to be here. And thinking back now, it almost seems that I've kind of been led to learn for 44 years, and now, this [joining the Church] is what I'm supposed to do."1

"The crowning blessings of the gospel are received in temples, in holy sanctuaries apart from the world, in the places where only the faithful assemble."
—Bruce R. McConkie