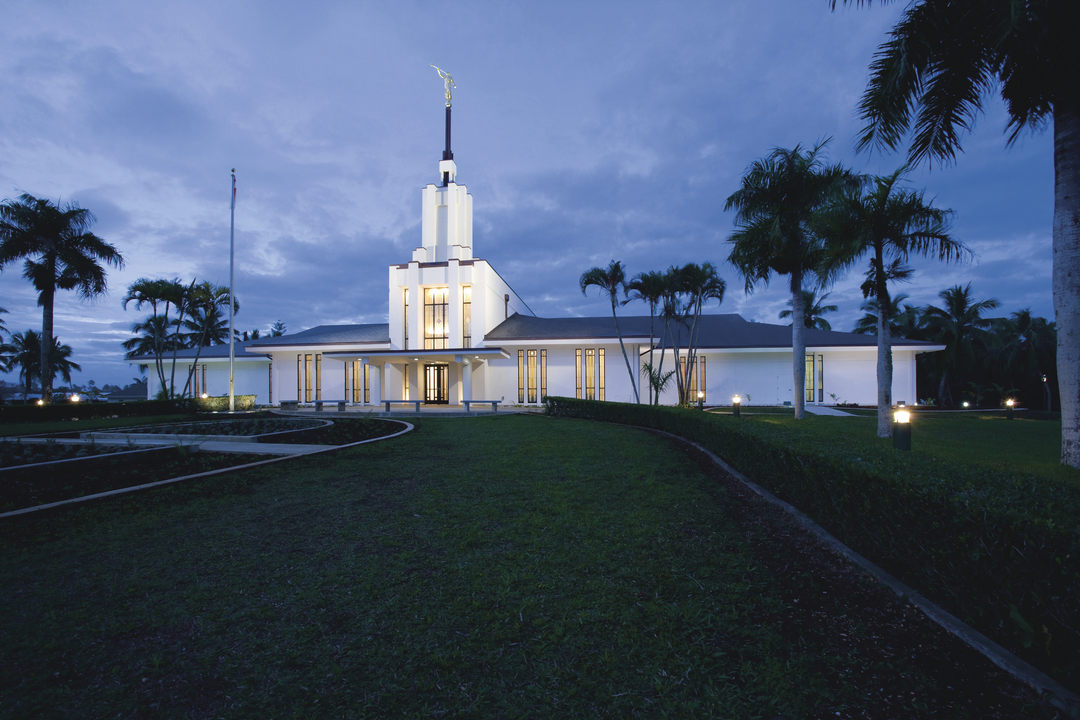 Nuku'alofa, the capital city of the Kingdom of Tonga, lies on the northern shores of the island of Tongatapu. The Nuku'alofa Tonga Temple occupies a beautiful tract of land several miles south of the city proper at the site of Church-owned Liahona High School. Majestic palm trees dot the grounds, which are full of healthy tropical vegetation.

The Nuku'alofa Tonga Temple was the fourth temple built in Polynesia, following the Laie Hawaii Temple (1919), the Hamilton New Zealand Temple (1958), and the Apia Samoa Temple (1983), and the first built in Tonga.

Tongan Church members showed great reverence for the Nuku'alofa Tonga Temple during its construction including working for months on the project without compensation and collecting on the grass at night to admire the angel Moroni statue shining in the temple lights.

The Nuku'alofa Tonga Temple was dedicated four days after the Apia Samoa Temple, marking the first time that two dedications were held in the same month.

During his visit to Tonga for the dedication of the Nuku'alofa Tonga Temple, President Gordon B. Hinckley enjoyed an audience with His Majesty Taufa'Ahau Tupou IV—king of "the friendly islands" and long-time friend of President Hinckley.

The first dedicatory session of the Nuku'alofa Tonga Temple was held in the temple, but the remaining sessions were held in the nearby gynmasium of Church-owned Liahona High School. To afford passage to attend the dedication, many members sold their farm produce, animals, or other belongings. Services were crowded with over 3,000 attending the final service, creating an overflow into other rooms of the building.

After an extensive addition and remodeling project that added over 5,000 square feet, the Nuku'alofa Tonga Temple was rededicated on November 4, 2007, coinciding with Constitution Day—the day the Tonga Constitution was enacted 132 years ago.

In June 2006, the Nuku'alofa Tonga Temple closed for an extensive expansion and remodeling project. The temple reopened the next year with over 5,000 additional square feet and a breathtaking new interior. "I felt like I was in heaven while I was in the temple," commented open house visitor Finau Nisa of the Wesleyan faith. Many others shared in the heavenly experience of the open house with the number of visitors equaling 40 percent of the total population of the nation.1

Beauty extended beyond the walls of the temple thanks to Helping Hands—the service arm of the Church, which initiated a nationwide clean-up campaign in anticipation of the thousands of visitors expected at the open house. The effort kicked off on Saturday, July 21, 2007, where thousands of citizens across all faiths, numerous community groups, organizations, and businesses banded together to scour Tonga in a nine-week series of clean-up events. The heart-lifting results were a fitting tribute to the occasion of rededication.2

At an event honoring the opening of the temple, audience members were honored by the attendance of the king of Tonga, His Majesty George Tupou V. Though not a member of the LDS faith himself, the king praised the temple, calling it "magnificent" and "a tribute to the glory of God."3

The evening preceding the rededication, thousands crowded into Teufaiva Park to celebrate the completed temple with a cultural evening of traditional dances. Special guests included His Majesty King Siaosi Tupou V, Her Royal Highness Princess Salote Mafile'o Pilolevu Tuita, and apostles and other general authorities of The Church of Jesus Christ of Latter-day Saints. Hundreds of Tongan Church youth performed the evening's dances, spreading over the entire width and length of the rugby field. Special performances were provided by the reigning Miss Heilala Tessi Toluta'u. For those unable to attend in person, the full program was broadcast live on Television Tonga and broadcast to other countries via satellite.4

Elder Russell M. Nelson of the Quorum of the Twelve Apostles, accompanied by his wife Wendy Watson Nelson, presided over the rededicatory sessions of the Nuku'alofa Tonga Temple. Event organizers were not subtle with spelling out a theme for the services by hanging a large banner across the road in front of the temple stating, "Let's rededicate ourselves." Elder Sione M. Fineanganofo, Area Seventy, visited the theme in his remarks saying, "We are blessed here in Tonga. There is a chapel in almost every village in Tonga. We have the temple. We have a mission. What else do we need? We have everything in Tonga. Now we just need to remember to rededicate ourselves."5

"We know that Elijah did return—at least twice—after Malachi's promise.…At the Kirtland Temple, April 3, 1836, Elijah appeared to the Prophet and Oliver Cowdery and said, 'The keys of this dispensation are committed into your hands.'"
—Russell M. Nelson