Landscaping and interior work progressing; construction estimated to be completed in mid- to late 2023 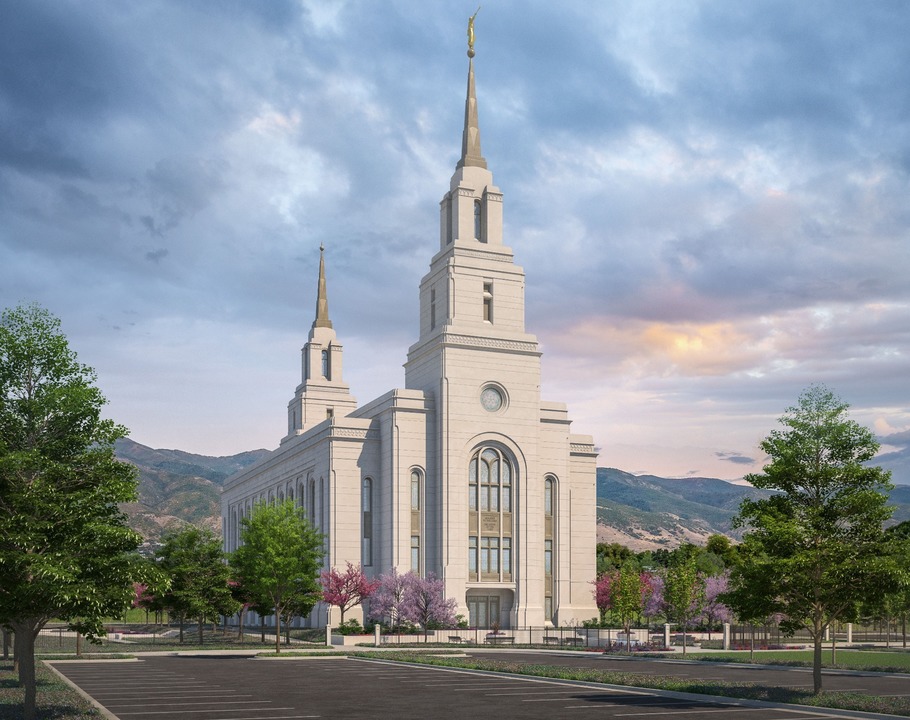 "We are very grateful to join you from this impressive and beautiful site," said Elder Craig C. Christensen, president of the Utah Area, at the scaled-down groundbreaking ceremony for the Layton Utah Temple held on Saturday, May 23, 2020. "Like every temple, it is the product of the faith of Latter-day Saints who live in this area, and around the world. It reflects our faith in Heavenly Father’s great plan of happiness, and in His Son Jesus Christ, including His Atonement and Resurrection." Elder Randy D. Funk, first counselor in the Area Presidency, offered the site dedicatory prayer. He prayed that "this temple may be a beacon of light for the entire community and a blessing for all." A video of the service was released online on May 30, 2020—the originally scheduled date of the groundbreaking.1

In November 2019, a preliminary subdivision plat and an application for a conditional use permit were brought before the Layton City Planning Commission.

On October 8, 2019, an official exterior rendering of the Layton Utah Temple was released.

Plans for the Layton Utah Temple call for a three-story building of approximately 87,000 square feet.

The Layton Utah Temple will be constructed on the site of an 11.8-acre pasture at the corner of Oak Hills Drive and Rosewood Lane on the southeast side of Layton. The property was acquired by the Church on Friday, March 30, 2018—two days before the temple was announced.

During the Sunday Afternoon Session of the 188th Annual General Conference, President Russell M. Nelson announced the construction of the Layton Utah Temple. The city of Layton is located in Davis County, a growing region of Northern Utah where members are organized into 64 stakes. The Church had recently announced that the Utah Salt Lake City Mission would be reorganized as the Utah Layton Mission.2

The Layton Utah Temple will be the nineteenth temple built in Utah and the second built in Davis County, following the Bountiful Utah Temple (1995).

The groundbreaking ceremony for the Layton Utah Temple, which had originally been scheduled for Saturday, May 30, 2020, was held one week early without advance public notice. In a statement issued later that day, Church spokesperson Irene Caso said: "Due to the ongoing COVID-19 pandemic and the need to limit public gatherings, leaders of The Church of Jesus Christ of Latter-day Saints determined a traditional groundbreaking for the Layton Utah Temple, with invited guests, was not prudent. The First Presidency assigned the Utah Area Presidency to conduct a small-scale groundbreaking, held Saturday, May 23, so that construction could proceed."3 A video of the service was released online the following Saturday on the originally scheduled groundbreaking date.