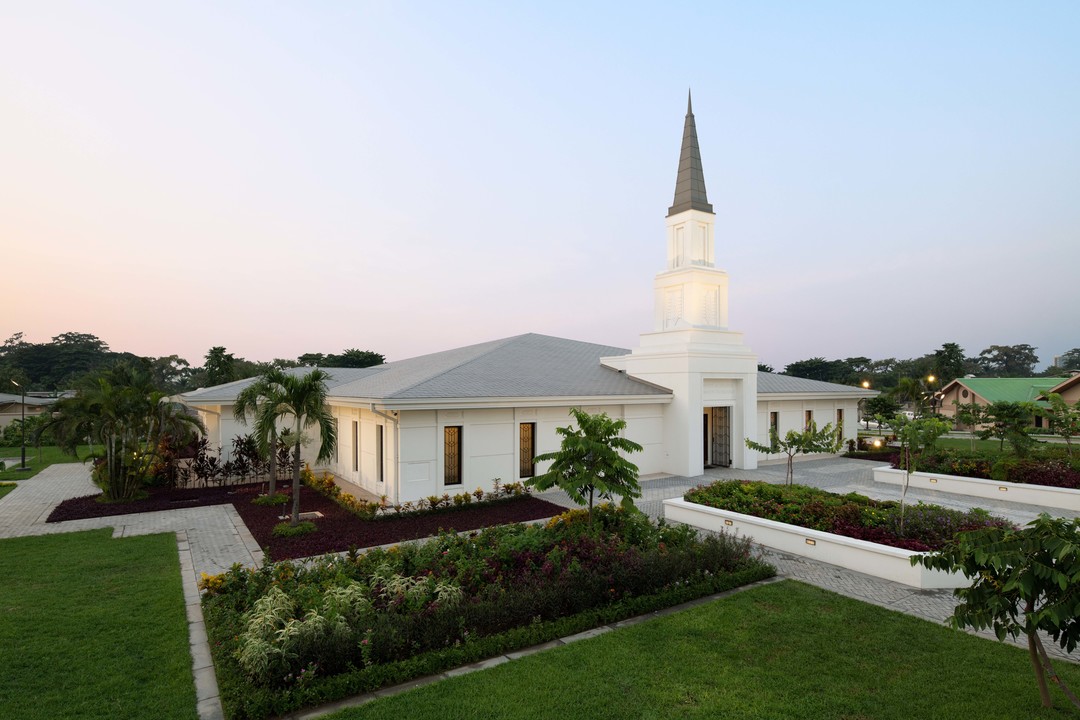 The Kinshasa Democratic Republic of the Congo Temple stands next to the stake center for the Kinshasa Democratic Republic of the Congo Stake on land that had been reserved for a temple for several years. A guardhouse sits at the beautiful driveway entrance to the grounds, which is lined with royal palm trees. An institute and seminary building operates on the property in addition to a patron housing facility.

Shortly before the open house of the Kinshasa Democratic Republic of the Congo Temple, a rather sightly yellow building that had stood behind the temple was painted a neutral shade of ivory. The Church later purchased the property and razed the building to construct a patron housing facility.

At the opening session of the October 2011 General Conference, President Thomas S. Monson announced plans to construct the Kinshasa Democratic Republic of the Congo Temple. The country had experienced rapid membership growth since the first stake was created in Kinshasa in 1996. The Saints of the region, where long-distance travel is exceptionally difficult, lived over 2,000 miles (3,200 kilometers) from their assigned temple in Johannesburg, South Africa. The temple would be a tremendous blessing to the thousands of Church members spread throughout the vast region of Central Africa.1

The groundbreaking ceremony for the Kinshasa Democratic Republic of the Congo Temple was held on Friday, February 12, 2016. Elder Neil L. Andersen of the Quorum of the Twelve Apostles presided. During his remarks, he recognized the sacredness of the occasion, saying it would be a day long remembered in the country. "This holy house will also bless the country and the people who surround it, whether or not they are members of the Church. It will be a light upon a hill, and the glory of the Lord will be upon it." He recognized the goodness of the people of Africa, stating: "They are a spiritual people. They trust in God and they pray to God. Our Heavenly Father loves His sons and daughters here and answers their prayers." Several civic and religious leaders were in attendance among the many members.2

More than 300 VIPs, including members of the local and international media, were guided through the Kinshasa Democratic Republic of the Congo Temple on March 11, 2019, following a news conference with Elder S. Mark Palmer, president of the Africa Southeast Area, and his counselors, Elder Joseph W. Sitati and Elder Joni L. Koch. On Saturday, March 9, a tour of temple was conducted for members of the construction team and their families. The general public was invited to tour the temple beginning Tuesday, March 12, through Saturday, March 30, 2019.

Elder Dale G. Renlund and his wife, Ruth, spoke to hundreds of youth at a devotional held at the stake center on the temple grounds the evening prior to the dedication of the Kinshasa Democratic of the Republic Temple. "It is an amazing blessing to have the temple in Kinshasa. Members will no longer have to travel far to receive the blessings of the temple," said Elder Renlund. He also taught, "When we are endowed, we covenant to follow Jesus Christ’s example and dedicate our whole life to Him."3

Elder Dale G. Renlund of the Quorum of the Twelve Apostles presided over the dedication of the Kinshasa Democratic Republic of the Congo Temple on April 14, 2019. He petitioned the Father on behalf of temple patrons saying, "Our Heavenly Father, this holy temple is built on the banks of one of the mightiest rivers of the world, with a constant flow year-round as it empties into the Atlantic Ocean. May all who qualify to be here be like the mighty Congo, continually flowing, like a fountain of righteousness, toward Thee on the covenant path. And like the diamond shapes that are depicted in various areas of the temple, may all, through the challenges and difficulties they endure, become firm, steadfast, and immovable in their faith in Christ and qualify to be Thy jewels and receive enduring joy."

"And early in the morning [Jesus] came again into the temple, and all the people came unto him; and he sat down, and taught them."
—John 8:2