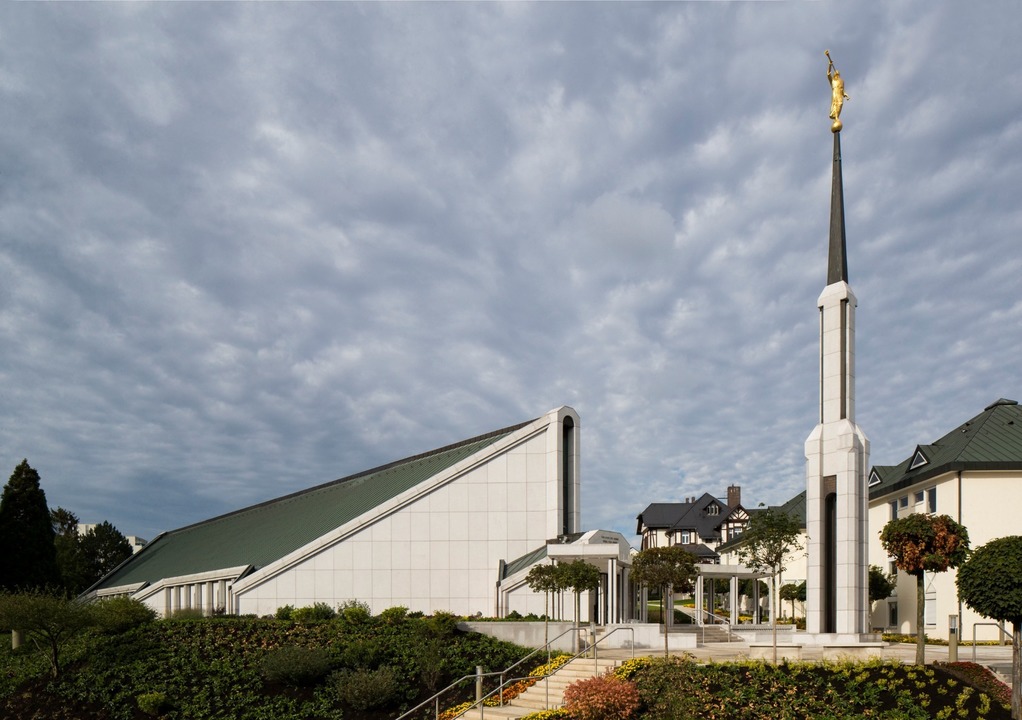 Situated several miles north of Frankfurt in the historic city of Friedrichsdorf, the Frankfurt Germany Temple stands on slightly elevated land near a major highway where drivers can glimpse its graceful detached spire. Ancillary buildings are on site including an entrance annex, a residence for the temple president (known as the "villa"), a temple missionary housing facility, a patron housing facility (known as the "hostel"), and a stake center. The immaculate park-like grounds—open to the public—are beautified with colorful shrubs and flowers.

The Frankfurt Germany Temple was the fifth temple built in Europe and the second built in the current boundaries of Germany, following the Freiberg Germany Temple (1985).

Construction of the Frankfurt Germany Temple met significant opposition during its early planning phases, but President Gordon B. Hinckley told local officials that they would not regret their decision to permit construction of the temple. It "will be a thing of beauty in this lovely area," he said. "It will be a source of pride to local residents, who will come to speak of it as 'our temple.'" Conditions of receiving a building permit including preserving and restoring the 1890s villa, refraining from erecting a fence around the property, and giving some of the land to the city for public parking.

President Gordon B. Hinckley broke ground for the Frankfurt Germany Temple the day after he concluded the dedicatory services for the Freiberg Germany Temple. The next day, he dedicated the Stockholm Sweden Temple.

During its week-and-a-half open house period, the Frankfurt Germany Temple was toured by some 70,000 visitors.

As an apostle, Elder Ezra Taft Benson was called to minister in Europe in 1945, following the devastation of World War II, and again in 1963 to serve as president of the European Mission, headquartered in Frankfurt. In August 1987, it was his special treat to return to Frankfurt—now as president of the Church—to dedicate the Frankfurt Germany Temple.

The Frankfurt Germany Temple was dedicated in eleven sessions over three days with approximately 12,570 members attending, largely coming from the nations of Germany, Belgium, the Netherlands, and France.

On September 7, 2015, the Frankfurt Germany Temple closed for renovation and enlargement. A few months later, a new stake center was dedicated that had been under construction next to the temple, and the former meetinghouse was demolished to make room for a missionary housing facility. The discovery of foundation issues during the renovation doubled the anticipated construction time from two years to four years. The baptistry was relocated to an underground extension, and a visitors' center was created in the annex building. Approximately 29,000 guests toured the temple during its public open house.