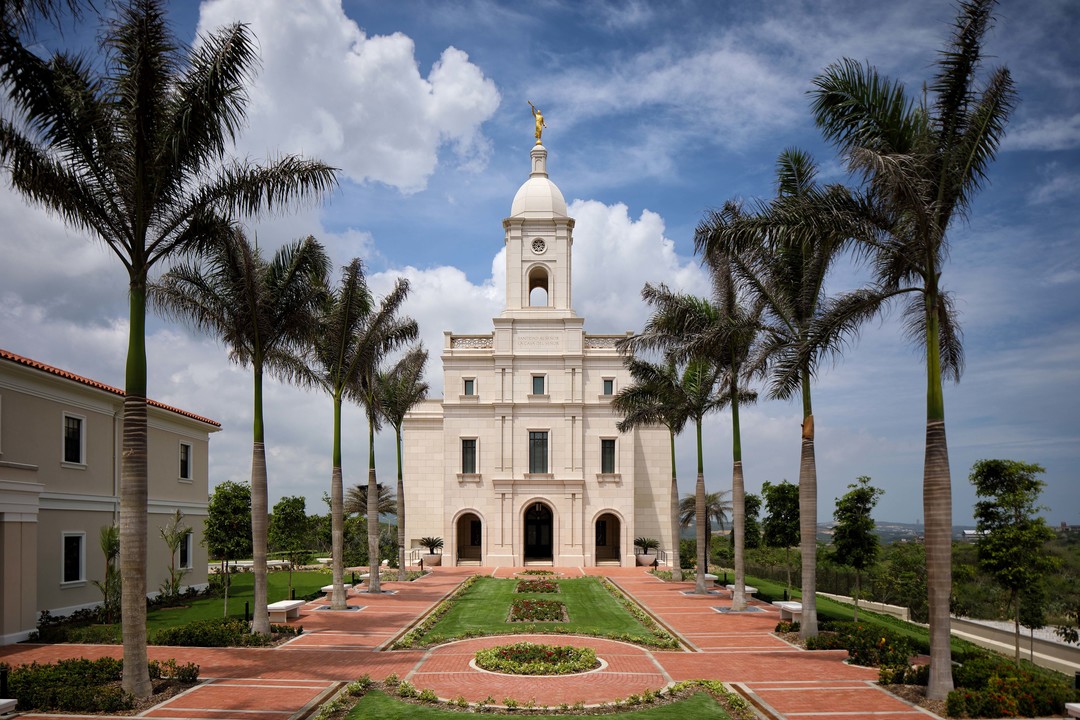 Two instruction rooms, one sealing room, and one baptistry

The Barranquilla Colombia Temple stands in the picturesque oceanside community of Puerto Colombia across from Colegio Alemán, approximately two kilometers west of Barranquilla proper. The hillside property, located on the highway to Cartagena, commands a beautiful view of the Magdalena River—the largest river in Colombia—and of the ocean. Adjoining the temple is an arrival center and missionary housing facility, anchored by a beautiful entrance plaza.

President Thomas S. Monson annnounced plans for the construction of the Barranquilla Colombia Temple in the Saturday Morning Session of the October 2011 General Conference. The announcement meant that the blessings of the temple would be brought much closer to Church members living in northern Colombia. It would be the country's second temple.

The groundbreaking ceremony for the Barranquilla Colombia Temple took place on Saturday, February 20, 2016, in the 50th anniversary year of the Church in Colombia. Elder Juan A. Uceda, president of the South America Northwest Area, presided at the ceremony. It was no coincidence, he explained, that construction of the country's second temple was beginning in that anniversary year. The hand of the Lord was at work. He challenged members to make temple attendance a regular family tradition, to hang photographs of the temple in their homes, and to conduct family history research.

In his site dedicatory prayer, he asked the Lord's blessings on all who would participate in the temple's construction including government leaders. Following the prayer, Church and civic leaders formally broke ground for the temple. Afterward, many more took the opportunity to turn a shovelful of dirt.1

Nearly 35,000 people toured the Barranquilla Colombia Temple during its three-week public open house held from Saturday, November 3, through Saturday, November 24, 2018. The open house provided an opportunity for the community to see inside the building before it was dedicated and to receive an explanation of the sacred ordinances performed there.

President Dallin H. Oaks of the First Presidency and Elder Ulisses Soares of the Quorum of the Twelve Apostles spoke to the youth of the temple district at a special devotional held the evening prior to the dedication of the Barranquilla Colombia Temple. President Oaks encouraged them to study the Book of Mormon. "Reading should be first on your list of what you do each day to learn the gospel and keep the commandments. The importance of the Book of Mormon is related to the testimony of Jesus Christ and His Atonement." Elder Soares said, "We invite you to go to the temple and do the vicarious work for your relatives and others. We are all transformed when we go to the temple."2

The Barranquilla Colombia Temple was dedicated on Sunday, December 9, 2018, in three sessions by President Dallin H. Oaks, first counselor in the First Presidency. In his dedicatory prayer, he said: "Please bless the leaders of this great nation of Colombia. Inspire their minds and motives as they lead. Please bless the citizens of this nation and its neighboring nations that they may enjoy freedom and be prospered in their spiritual and temporal activities."

"What are these which are arrayed in white robes? and whence came they? …And he said to me, These are they which came out of great tribulation, and have washed their robes, and made them white in the blood of the Lamb."
—Revelation 7:13–14