Installing millwork, light fixtures, and railings; estimated to be completed in early to mid-2023 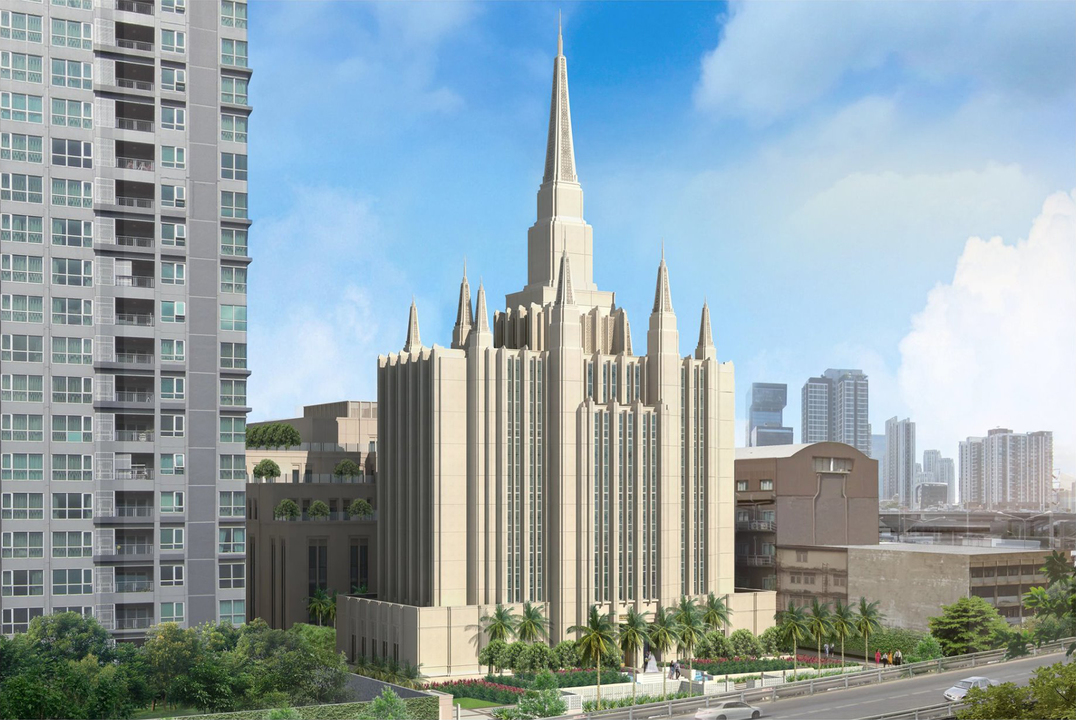 Elder Robert C. Gay of the Presidency of the Seventy was joined by Church and community leaders on Saturday, January 26, 2019, to break ground for the construction of the Bangkok Thailand Temple. Elder David F. Evans, president of the Asia Area, offered the site dedicatory prayer to an audience of 700 members with many more joining by broadcast at Church meetinghouses. "For more than 50 years, the faithful saints in Thailand have waited and prayed for this day," said Elder Evans. "The construction and ultimate completion of the temple will become a blessing for not only the members of the Church, but also for all who see the beauty of the temple and feel of the peace that will be found on this sacred ground."

Sister Wipharat Uanphoklang, who also offered remarks during the service, has lived the gospel faithfully with her husband and three sons. She shared the feelings of many Thai members when she said: "We have long prayed for a temple in Thailand. We are grateful that each of our children will have the blessing of receiving their temple ordinances and being sealed when they go on missions and marry. The temple gives us joy and hope as we seek to teach our children and help them feel of God’s love for them."1

On March 19, 2018, an artistic rendering of the Bangkok Thailand Temple was released to the public, revealing a 44,405-square-foot, six-story building with a soaring central spire and eight smaller surrounding spires. Behind the temple, an additional 91,370-square-foot Church facility will be constructed housing two meetinghouses, a service center, seminary and institute offices and classrooms, and mission offices and housing. An extensive underground parking structure is also planned for the site.

Speaking of the temple, President Russell M. Nelson said: "The Bangkok Temple will be a blessing to all the people of this area. It will be a symbol of faith to tens of thousands of members of the Church throughout the region and their commitment to follow Jesus Christ. It will also stand as a reminder that God loves and cares for all of His children. All we do in the Church points to the Lord and His holy house."2

President Thomas S. Monson announced the construction of the Bangkok Thailand Temple during his opening remarks at the Sunday Morning Session of the 185th Annual General Conference. The temple will be the first in Thailand where the Church was formally organized in 1966. There are now approximately 18,000 Church members in 38 congregations in Thailand. The Bangkok Thailand Temple will serve Latter-day Saints throughout Southeast Asia. Members currently attend temple worship services in Hong Kong, over 1,000 miles away.3

Nearly twenty years after the first stake was organized in Bangkok in 1995, the city's second stake was organized on June 15, 2014, and its third on November 27, 2016. The first stake in Thailand outside of Bangkok was organized in Ubon on June 14, 2015. Two other districts operate in the country, headquartered in Chiang Mai and Udorn, which are expected to be reorganized as stakes in the coming years. In neighboring Cambodia, the country's first two stakes were both organized on May 25, 2014. Stakes have also been organized in the surrounding nations of India, Indonesia, and Singapore. Several districts operate in nearby Malaysia.

The Bangkok Thailand Temple will be the first temple built in mainland Southeast Asia.

Although the original rendering of the Bangkok Thailand Temple featured a statue of the angel Moroni atop the center spire, it was later removed from the design.

On June 12, 2000, President Gordon B. Hinckley became the first president of the Church to visit Thailand where he enjoyed a "pre-birthday" celebration hosted by Deputy Prime Minister Bhichai Rattakul. The next morning, President Hinckley also met with Bangkok Governor Bhichit Rattakul and Thailand Prime Minister Chuan Leepkai who thanked the prophet for all the work that Church volunteers had rendered for Thailand, noting in particular the 100 volunteers who had taught more than 300,000 English teachers and students over the previous three years.

Bangkok was the second stop in a tour of Asia and the South Pacific to dedicate four temples in Fukuoka, Japan; Adelaide, Australia; Melbourne, Australia; and Suva, Fiji. Before leaving Bangkok, President Hinckley addressed a congregation of over 2,600 members at the Thailand Air Force Convention Center. Some members had traveled 18 hours by bus to be in attendance.

In his remarks, President Hinckley recalled his first visit to the country in 1961 when there were just a half dozen members of the Church. By 1966, President Keith E. Garner of the Southern Far East Mission had organized the Thailand District, and President Hinckley returned in November of that year to dedicate modern Thailand for the preaching of the gospel. "We went quietly in the morning into Lumpini Park, a small group of us, including Elder Marion D. Hanks of the Seventy, and there we lifted our voices in prayer. We prayed that the Lord would smile upon this land, that He would touch it by the power of His Holy Spirit, that the way would be opened for missionaries to come here, that the faithful would accept the truth, and that the Lord would do a great and good work here." He continued, "Now it's been a long time since I was here and I have seen a miracle, a very real miracle." He told the members that they were pioneers of the Lord's work in their country and promised that if they were faithful, the time would come when a temple would be constructed in Thailand. "The Lord expects so very, very much of you. He expects you to be the best people in all of Thailand, and you ought to be because you have a knowledge of His everlasting truth."4