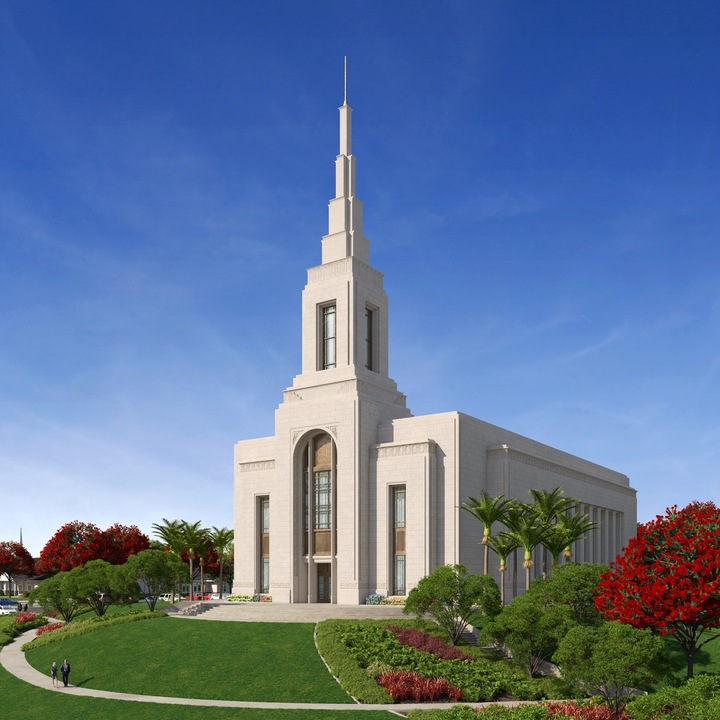 "This is an historic day as we dedicate the ground for the Auckland New Zealand Temple," said Elder Ian S. Arden, president of the Pacific Area, at the groundbreaking ceremony held on Saturday, June 13, 2020. He added, "The temple will be a beautiful, bright light in the city of Auckland, inviting all to come unto Christ." All three members of the Area Presidency and their wives were in attendance along with leaders from civic, religious, and community organizations including Mayor Phil Goff. In his remarks, Mayor Goff celebrated the diversity of faiths and cultures in New Zealand stating, "We are free to worship as we choose. Together, we must defeat prejudice, intolerance, and bigotry. We stand together against these things." Groundbreaking Co-Chair, Ngatai Smith, emphasized that the temple will be "a place of beauty, holiness, peace, and tranquility. Most importantly, it will be a place where people will come to hear God speaking to them, words of comfort and gentle guidance."1

In early June, the Pacific Area Presidency announced a delayed groundbreaking broadcast for the Auckland New Zealand Temple to be held on Sunday, June 14, 2020 at 6:00 p.m. NZST. The online video transmission will be a recording of the live services held one day earlier. Those who wish to participate can watch the video on the Pacific Area website or on the Pacific Area Facebook page where it will be pinned as a "watch party." The presidency stated: "We are blessed that even in the midst of global challenges, the work of salvation continue and the bright beacon of the temple shines forth as a symbol of hope for all to see."

On March 12, 2020, an official exterior rendering of the Auckland New Zealand Temple was released.

During a nine-day ministering tour of the Pacific islands, President Russell M. Nelson spoke at a devotional held Tuesday, May 21, 2019, in Auckland's Spark Arena to a congregation of 12,000. He said: "Today I am pleased to announce that the new temple will be built in Auckland on Redoubt Road." The hillside site sits between the stake center for the Auckland New Zealand Redoubt Stake and the New Zealand Missionary Training Center. President Nelson added that the temple would be a "two-story building with a granite exterior. It's light and beauty will be highly visible."2

The city of Auckland was announced as the home of New Zealand's second temple on October 7, 2018, by President Russell M. Nelson. The country's first temple, the Hamilton New Zealand Temple (1958) had recently closed for an extensive renovation project. There are thirteen stakes in the Auckland metropolitan area where Church membership has grown significantly in recent years. The Church was first established on the island nation in the 1850s and has more than 114,000 members today.3

The groundbreaking ceremony for the Auckland New Zealand Temple was announced on the same day that the Church announced it was temporarily suspending all public gatherings of Church members worldwide, including sacrament meetings, in response to the COVID-19 pandemic.

"My brothers and sisters, temples are more than stone and mortar. They are filled with faith and fasting. They are built of trials and testimonies. They are sanctified by sacrifice and service."
—Thomas S. Monson